Ramada at Barbara Worth Contract Not to Exceed $20 Million, Extended Through March 2022. 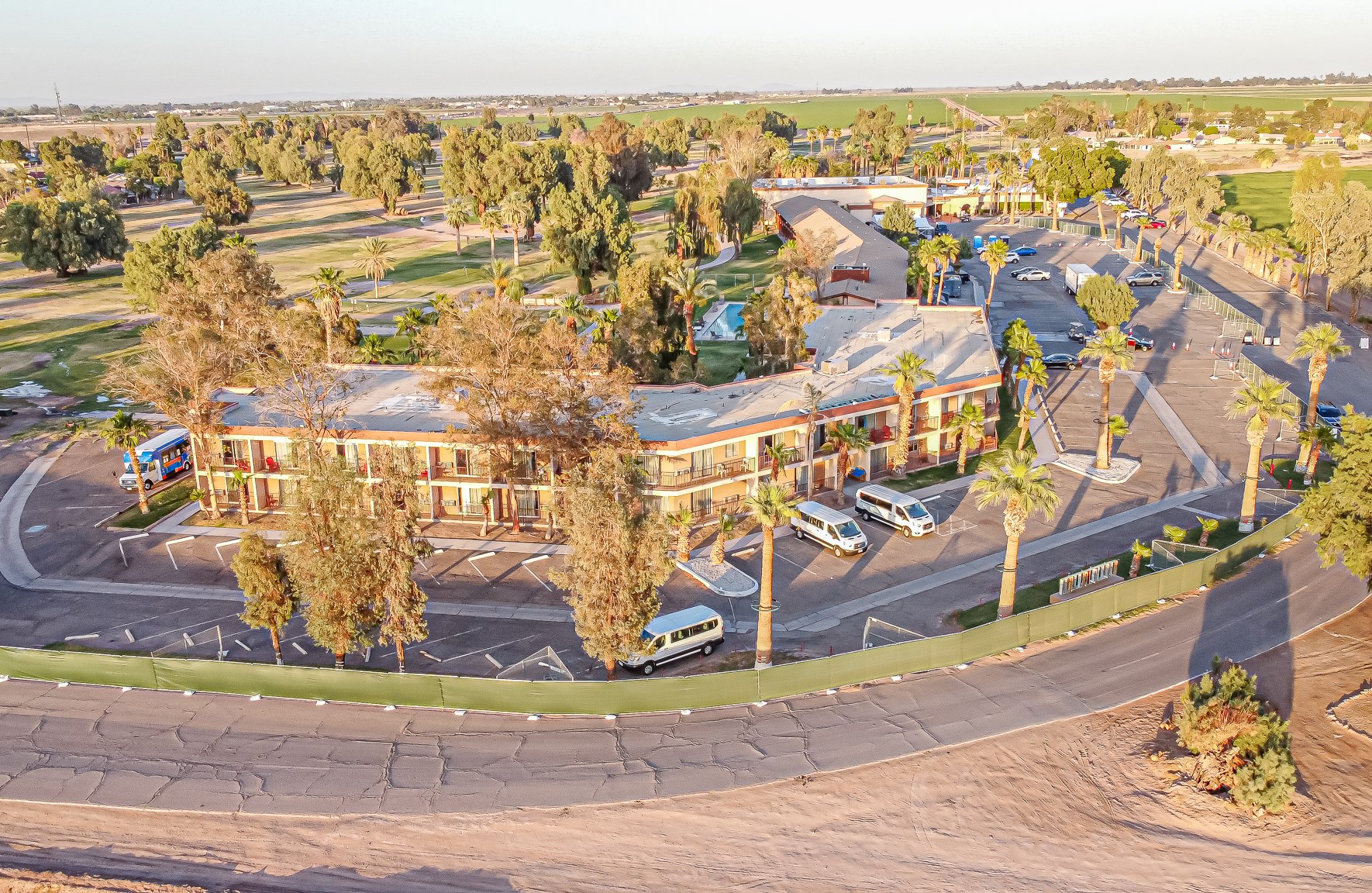 The green perimeter fence around the Barbara Worth Country Club and the Ramada by Wyndham Hotel outside Holtville still stands today as it did in May. On July 1, the state extended its contract through March 2022 with the hotel as the sole location in Imperial County to quarantine asylum seekers possibly affected by COVID. The extension was not to exceed $20 million. | CAMILO GARCIA JR. PHOTO
Home
Featured Stories
Share

HOLTVILLE — A reduction in the number of asylum seekers that have been released in the county by the federal government has prompted stakeholders to consolidate their sheltering operations to just one site, the Ramada by Wyndham Hotel at the Barbara Worth Country Club.

As of July 1, the Travelodge by Wyndham El Centro ceased being used as a temporary housing site after its contract with the state Department of General Services expired on June 30, the end of the state’s fiscal year.

On May 14, the DGS extended its contract with the Ramada hotel just outside Holtville to act as the exclusive temporary housing site. That contract was also scheduled to expire on June 30 but had been extended to March 31, 2022, and is not to exceed $20 million.

“The Hotel shall offer sleeping rooms at $90 per night, and an additional $69 per room per night, for a total of $159 per night, plus taxes during the length of the contract, equaling $17,172 per day, plus taxes,” the contract’s statement of work stated.

“This cost will include use of all 108 rooms, use of all conference and event space, use of specific common areas, use of 600 of the hotel’s parking spaces, 24-hour hotel staffing support, and laundry services and other listed services.”

The agreement may be extended in six-month increments, if needed. The contract is administered by DGS on behalf of the California Department of Public Health, which operates a statewide housing initiative for vulnerable populations during the COVID-19 pandemic.

It was not clear what cost- and revenue-sharing mechanism exists between the Ramada by Wyndham chain of hotels and the Barbara Worth Country Club.

Country club owner Eddie Mejorado did not respond to a request for comment.

Catholic Charities Diocese of San Diego will continue to provide wraparound services for the individuals housed at the Ramada hotel. It had provided similar services at the Travelodge in El Centro before the hotel’s housing contract with the state expired.

(Read Past Reporting on Some of the Migrants and Efforts to House Them.)

(Read Past Reporting on Nearby Residents’ Reactions to the Housing.)

The decision to consolidate the temporary housing sites was prompted by a decline in the number of asylum seekers that are being released into the county by federal immigration officials, said Nadine Toppozada, Catholic Charities’ Refugee and Immigrant Services director.

“The operation is being consolidated into one hotel only given the absence of the need for two hotels,” Toppozada said in a June 22 email. “The number of asylum-seekers being released has declined.”

She also refuted the rumor that individuals temporarily housed at the Ramada and Travelodge hotels had been leaving the sites prior to having completed the term of their required quarantine.

Toppozada did not immediately disclose the total number of asylum seekers that Catholic Charities has assisted at both hotels when contacted on the morning of Wednesday, July 7.

Whether the Department of General Services enters into any new agreements with hotels for the temporary housing of asylum seekers in border communities is determined by the state Department of Social Services and the California Office of Emergency Services and is based on programmatic needs, a DGS spokesperson said.

The state is continuously evaluating the need to provide sheltering services to migrants in border communities. The situation remains fluid and requires the state to closely monitor federal immigration policies that may impact the number of arrivals, as well, said Jason Montiel, Department of Social Services spokesperson.

The previous use of the two local hotels for the sheltering of migrants came in conjunction with the use of two other hotels in the San Diego region and six hotels in Riverside County.

Of the six contracts in Riverside County, the Comfort Inn Moreno Valley, located at 23330 Sunnymead Blvd., confirmed it had gotten a contract extension to house migrants. Two other hotels confirmed their contracts ended June 30, while the remaining hotels either were not able to provide a definitive response or could not be reached for comment.