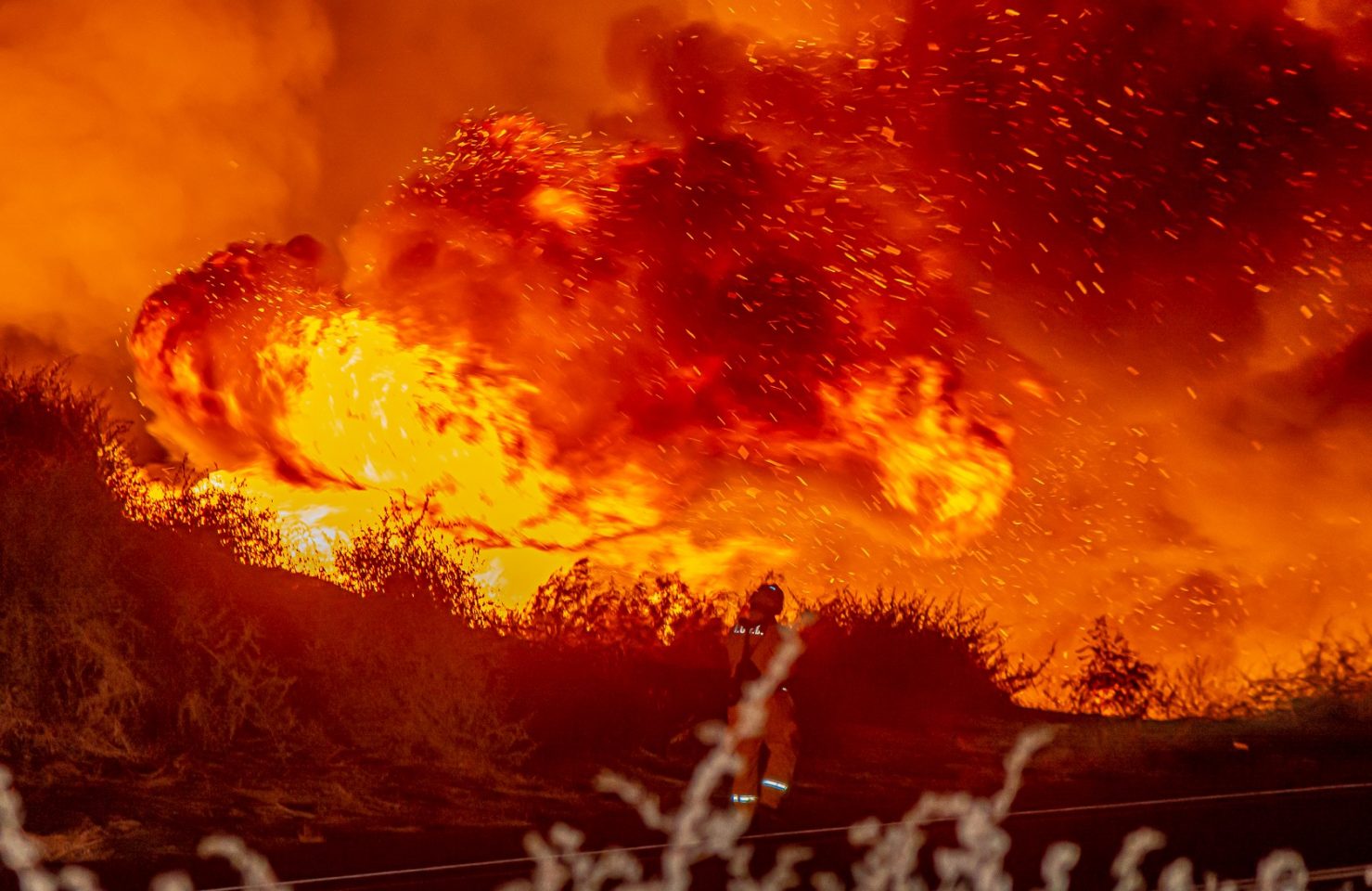 A shower of embers seem to spray outward from a swirl of flame on the south side of the banks of the New River at Ferrell Road as a lone firefighter walks in the vicinity early Tuesday morning, July 6. A massive four-alarm river bottom fire broke out around 10 p.m. Monday, July 5, and burned about 130 acres from Ferrell Road east to the Clark Road bridge. | CAMILO GARCIA JR. PHOTO
Home
Local News
In Local NewsPublic Safety

Public is Being Warned to Avoid the Area for Next 12 Hours.

CALEXICO — A massive four-alarm brushfire that scorched around 130 acres along the New River bottom between South LaBrucherie Road/Ferrell and Clark roads west of Calexico has been contained and remaining crews were out battling hotspots and cutting fire lines to prevent significant flareups on Tuesday morning, July 6.

An emergency cellphone alert that went out after 10 p.m. on Monday night, July 5, advising the public to stay away from the fire site was still in effect, Imperial County Battalion Chief Juan Rodelo said around 8:15 a.m.

Rodelo added that a number of road closures by the California Highway Patrol were also still in effect Tuesday morning at LaBrucherie Road at Wahl Road and Clark Road at Willoughby Road, both north of the fire site, and at Ferrell Road at Highway 98 south of the fire.

Fire crews made up of local agencies, two strike teams from San Diego County, and teams from Yuma city and Yuma’s Rural Metro fire departments got the upper hand on the fire sometime after 2 a.m., it appears.

Rodelo said the fire, which burned mostly to the north of the New River, was advancing east, prompting fire command to position crews at Clark Road to protect two to three homes in the area in case the fire moved beyond the bridge.

It was at that point, however, that Rodelo indicated fire and wind conditions changed and allowed crews to stop the blaze in its tracks, and he said as of 8 a.m. the fire was contained to the areas between the two bridges.

There were some significant hotspots on the edges of the river bottom and crews would be watching for major flareups throughout the day, the battalion chief added.

The Imperial Irrigation District had brought in a bulldozer to the scene, and that would be used to move brush and help crews cut fire lines to stop any further flareups, Rodelo said.

Scanner radio traffic could be heard discussing the dozer at various points during the fire as they looked for a place it could enter the river bottom. Around 8 a.m. there was discussion that the heavy machinery was needed to help ward off any potential fire movement toward a major power line that provides electricity to East San Diego County.

Meanwhile, there was no indication as to what started the fire on Tuesday morning, Rodelo explained, but the origin does appear to be right around Ferrell/LaBrucherie, and the cause is under investigation.

So far, no fire personnel have been injured and no structures were damaged. However, around 11 a.m. there were some reports that strike team members from the San Diego area were becoming overheated and AMR ambulance crews were being called to the scene to render aid.

At the height of the firefighting effort, more than 80 fire personnel were assembled, with a total of 10 engines among two strike teams from San Diego alone. There were also crews from Yuma County, the Imperial County Fire Department, and El Centro, Calexico and Holtville fire departments.

Some 60 firefighters were still working the scene around 9:30 a.m. Tuesday, Rodelo said. The San Diego crews and many of the locals crews remained, but Calexico and the Yuma departments returned to their stations.

There were earlier reports of permanent fire damage to the bridge over Ferrell/LaBrucherie Road, when the California Highway Patrol reported the damage around 1 a.m. and stated that additional closure signage was being put out on both sides of the river.

However, Imperial County Public Works Director John Gay said both the Ferrell and the Clark Road bridges were structurally sound after an on site assessment on Tuesday morning.

“The (Imperial County) Fire Department did an amazing job. They saved the structure,” Gay said, referring to the Clark Road bridge.

He added a check of the bridge over the Alamo River at Rutherford Road in the North County also showed it was sound following the three-alarm brushfire there on Monday evening.

Flames could be seen from as far north as Interstate 8 around El Centro, and one individual stated they could see the glow from Keystone Road on the way to Brawley.

The blaze broke out on Monday night at a time when fire resources in the county were already stretched thin. Many of the local departments were still tending to a three-alarm brushfire underway in the North County near Wiest Lake and the Alamo River north of Brawley. That fire was extinguished late Monday night, Rodelo said.

On Tuesday morning, around 7:40 a.m., McCabe Union Elementary School District, which has campuses near McCabe and Austin roads south of El Centro, sent out an alert to parents advising the district would be taking precautions with summer school students regarding air quality to the district’s proximity to the fire.

Calexico Unified School District, which is also in the midst of its summer school program, has its students staying indoors, with no recess scheduled, according to a district spokesperson.

Rodelo added that little smoke was emanating from the fire site as of 10:30 a.m., and with no inversion layer it was heading straight in the air.

Comite Civico del Valle does have an IVAN (Identifying Violations Affecting Neighborhoods)-Imperial air monitor at Ferrell and Kubler roads south of the fire site, which preliminarily showed a significant increase in moderate levels of air pollution association with soot and ash and a small increase in unhealthy levels on Tuesday that did not register the day before. The numbers are raw and unadjusted, according to Comite Civico.

Three countywide emergency alerts were sounded shortly after 10 p.m., with the latter informing residents to disregard the first two. It appears the first two alerts did not provide locations and were unclear to what there were referring.

Check back for additional details as they become available. This story was last updated at 9:45 a.m. Tuesday, July 6.