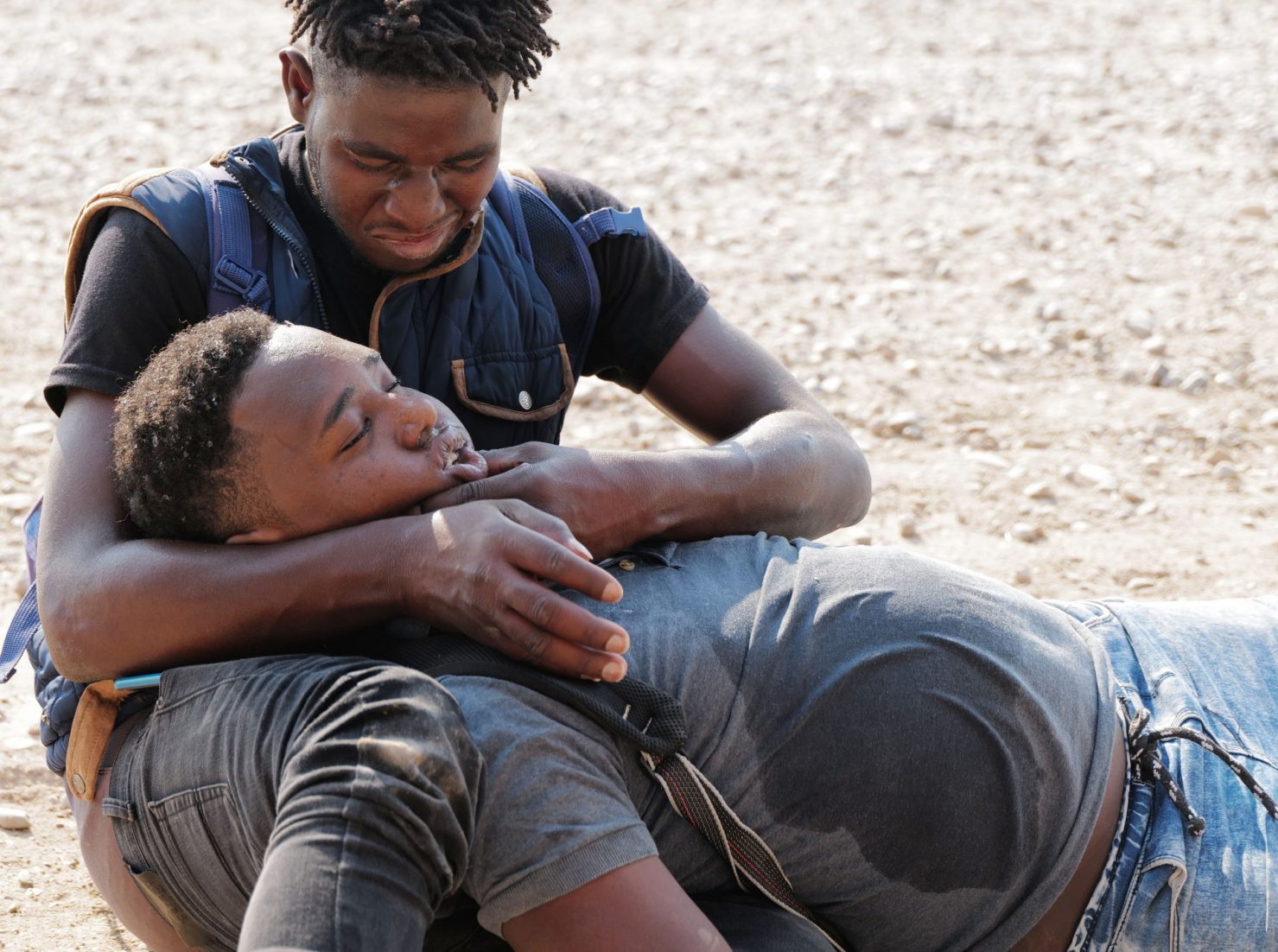 A Haitian man overcome by the desert heat is cradled in the arms of another Haitian man after the friends illegally crossed the U.S.-Mexico border near San Luis, Arizona, on Tuesday afternoon, June 15, where temperatures reached at least 119 degrees. Confused and unsure what to do, the friend tries to resuscitate his companion. | JIMMY DORANTES PHOTO
Home
Featured Stories
Share

SAN LUIS, ARIZONA — With the region’s illegal border crossings and temperatures rising in tandem, photojournalist Jimmy Dorantes said he felt the relentless pull of the border beckoning him and his camera.

For decades, Dorantes has used his photographic skills to chronicle life, culture, and controversy along the United States-Mexico border, in a personal and professional capacity.

More recently, he has embarked on a series of excursions to capture the plight and joys of immigrants who have been arriving at the border amid the region’s soaring temperatures.

“I really wanted to come here because of the excessive heat,” the Alpine resident and Calexico native said on Wednesday, June 16. “I knew some people would be in trouble.”

His instincts proved true a day prior, when he encountered two male Haitian nationals walking on the Mexican side of the international border northwest of San Luis, Arizona, one of whom was suffering from apparent heat-related illness.

The distressed Haitian “inhaled” the cold bottled water that Dorantes was able to pass to him through the border barrier that separated them, but then soon collapsed onto the ground, where he remained unresponsive to the pleadings of his companion.

After a brief pause, the distressed man was able to recover and, with the assistance of a drink containing electrolytes that Dorantes provided, continue north in the direction of a gate in the border barrier where many migrants have been turning themselves in to the custody of the Yuma Sector Border Patrol.

But trouble kept pace, and again the Haitian collapsed onto the ground about 25 yards from where Dorantes said he initially encountered him and his traveling companion.

“At that point he could not get up,” said Dorantes, who was able to ascertain the pair’s nationality by communicating with one of the men in French. “He was just gone, there was no life in him.”

Although Dorantes has training in providing first aid, the border barrier prevented him from any further assistance other than to call 911. Border Patrol responded soon afterward, providing care until an ambulance arrived to transport the individual to a nearby hospital.

Unlike many areas where only a single barrier exists between Imperial County and Mexico, where Dorantes found the Haitian men was in a neutral zone of sorts, on the U.S. side but between a north-south-running canal just east of the international boundary but to the west of the barrier fence.

The harrowing experience of the Haitians was captured in vivid detail by both Dorantes’ mind and camera lens. It also was a vast departure from his experiences at the Southwest border decades back when immigrants would go to great lengths to avoid detection and apprehension by the Border Patrol.

“They were always running away from the Border Patrol,” he said. “Now this time, everybody’s walking toward them.”

The Haitian national appears to have survived the harrowing experience, since no recent reports of heat-related deaths had come to the attention of the public affairs office of the Yuma Sector Border Patrol, said Special Operations Supervisor Vincent Dulesky, nor the Yuma County medical examiner stationed inside Yuma Regional Medical Center.

Within the sector, illegal border crossings have been increasing as of late. In place of the 20 to 60 individuals who Border Patrol had encountered on a daily basis in November and December, the agency is now apprehending anywhere between 250 to 500, Dulesky said on Thursday, June 17.

In addition, large groups of 100 people or more have become commonplace this time of the year in comparison to last year.

“Eighty to 95 percent of those that are coming turn themselves in,” Dulesky said.

Nor are the immigrants having to trek endlessly through the surrounding Sonoran Desert on their way stateside. At most, many of them have to walk about half an hour before they reach a point where they can surrender themselves to the custody of the Border Patrol to claim asylum.

“What we’re finding is that these are organized trips,” Dulesky said. “They’re being bused in air-conditioned buses and vans for the most part.”

And while the Yuma Sector has typically seen a decrease in illegal border crossings during the summer, Dulesky said, the opposite seems to be the case in both Yuma and neighboring El Centro Sector, according to Imperial County-based Agent John Mendoza.

Since October, the El Centro Sector has made more than 41,000 apprehensions, a figure that fairly eclipses the more than 15,000 that the sector recorded at the same time last fiscal year.

“That is an increase of 161 percent for the same time period,” Mendoza said in an email Thursday, June 17.

As troubling as those trends are, they also translate into compelling photographic content for Dorantes and other likeminded photojournalists. Indeed, prior to his most recent solo trip to San Luis, Dorantes had toured the region’s international border on several occasions with various professional colleagues.

That crowd at times has included a raft of Pulitzer Prize-winning photojournalists, including retired Associated Press photographer Nick Ut, former UPI photojournalist David Hume Kennerly, retired Los Angeles Times photographer Don Bartletti and Angel Franco, who was part of a team at the New York Times who had won the coveted award, and who is now also retired.

“I was in good company,” Dorantes said.

Dorantes’ fascination with the border is the result of having grown up at his family’s First Street house, mere yards from the international border between Calexico and Mexicali. He was just 3 years old when he was gifted his first camera and since then he has used the medium to document life along the Southwest border and illegal immigration.

“My work is to document and share impartially what I witness and experience,” he said. “At the same time, I’m a human being and I see these people as human beings who are suffering.”

In 2019, Dorantes published a photography book aptly titled “Life Along the Border.” Much of its material dates to his decades-long employment as a professional photojournalist. Some of its photos were included as well in a traveling exhibit of the same name in 2020.

Before earning accolades as a photographer for the Associated Press, as well as Time and Life magazines, Dorantes’ first professional gig was for the Calexico Chronicle when he was not quite yet in high school.

Time and again, his profound love for his hometown as well as the Southwest border has prompted him to return to his roots and similar environs. During prolonged absences, he admits experiencing what he characterized as something akin to “withdrawals” that can only be cured by his frequent photographic excursions to the border.

“It’s a lifelong obsession I’ve had,” he said.