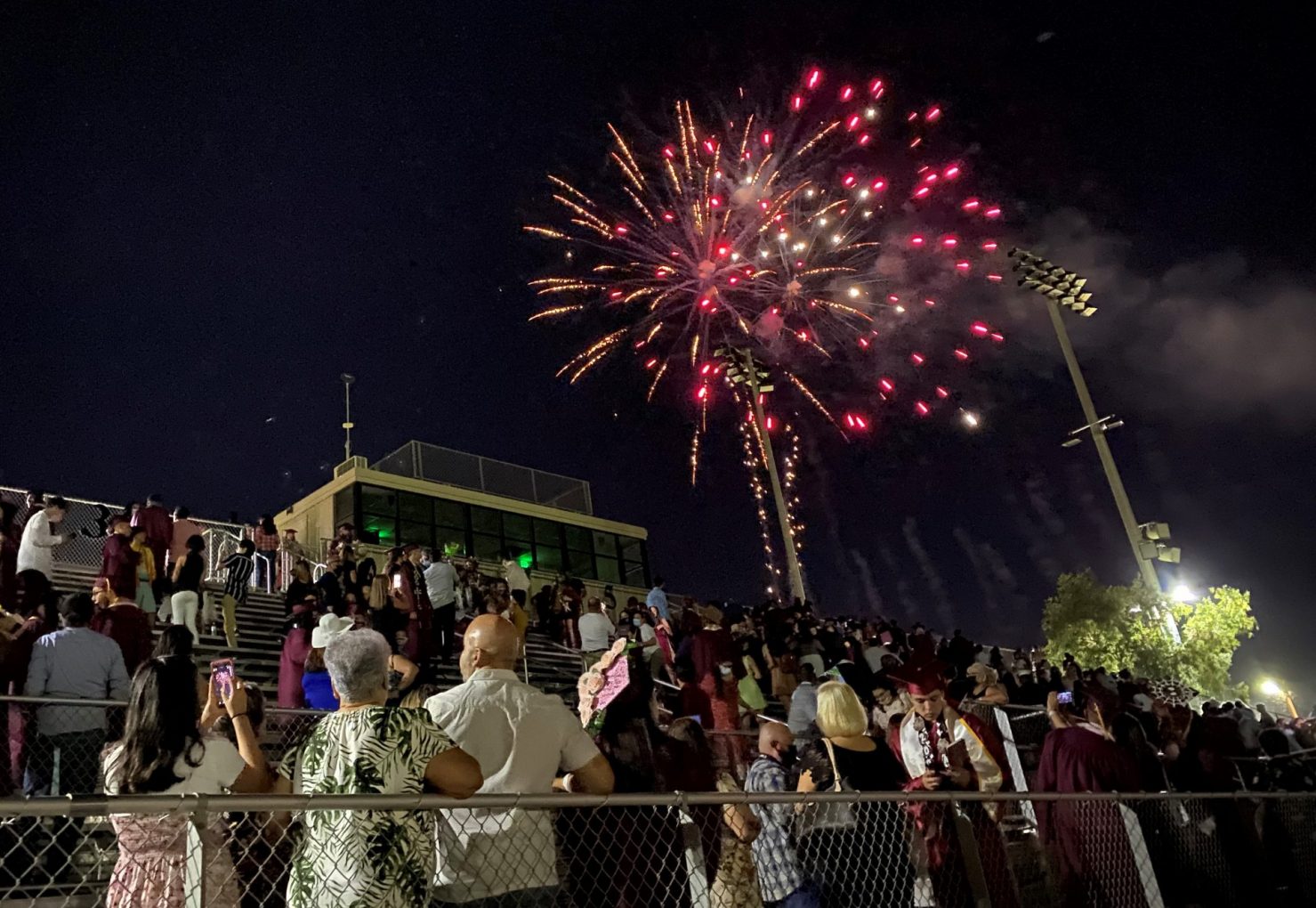 Calexico High’s Class of 2021 gather with their parents and loved ones in the bleachers to watch the fireworks display that immediately followed commencement ceremonies on Friday, June 11. The fireworks show took place over two night, Thursday, June 10, and Friday. | CAMILO GARCIA JR. PHOTO
Home
Education
In EducationFeatured StoriesLocal News

CALEXICO — Past traditions were set aside for the 108th Calexico High School commencement ceremony that was held on Ward Field on Thursday, June 10.

For one, rather than host just one graduation ceremony for all 619 seniors of the Class of 2021, it was decided to honor separate halves of the graduating class over the course of two successive nights.

Additionally, graduating Bulldogs were allowed to join their guests in the surrounding bleachers during the fireworks display that has annually put a colorful and audible cap on the graduation ceremony.

“We are sending your graduate your way for the grand finale of the fireworks,” Principal Gabrielle Williams-Ballesteros told those gathered on June 10.

After years of watching his son commit to his studies and mature into a young man, Antonio Escandon said the ability to watch the fireworks display together as a family was a pleasant addition to an already emotional experience.

“We’re very proud of him,” the elder Escandon said in Spanish as he sat with his son and wife, Monica Escandon, to watch the pyrotechnic show.

(Read Related Story: Bulldogs Asked to ‘Be Like Water,’ Be the Change)

Being able to join his parents as the fireworks illuminated the night sky was also a blessing for Antonio Jr., who acknowledged that the 2020-2021 school year was full of surprises, some of which were more enjoyable than others.

“I’m proud of myself and my classmates for having graduated and representing the high school and the city of Calexico on this day,” he said in Spanish. “This was the class that many would agree faced the most challenges.”

Nor would Antonio Jr. have had it any other way. The challenges that the COVID-19 pandemic had brought to the past school year only served to further motivate Antonio, who graduated with honors.

The Navy Junior Reserve Officers’ Training Corps member said he will soon enlist in the U.S. Navy with the hopes to study in its mechanical engineering and nuclear engineering programs.

“Others may be too intimidated to take such a path, but I’m all for it,” Antonio said. “For me, it represents the greatest opportunity that I’ve had and will come my way.”

His pending enlistment in the armed services is a first for his immediate and extended family, but hopefully not the last.

“I want to start a tradition in my family to serve in the nation’s armed forces and have it represent something bigger that can be done with one’s life,” Antonio said.

Plans had called for Garduño to sing a pair of songs as his fellow Bulldogs made their way off Ward Field to join their invited guests, but technical difficulties appeared to have prevented the first accompanying instrumental track from playing.

Yet, that didn’t stop Garduño from singing an acapella rendition of Banda MS’s “Somos Los Que Somos” as the fireworks were readied for launch.

The school year’s adoption of distance learning proved to be challenging for Garduño, who admittedly found it difficult to stay engaged. At the same time, the changes had provided him a greater opportunity to devote to his burgeoning music career.

“It had its pros and cons and its ups and downs,” he said.

Last November, Choco was one of five young contestants on the popular Spanish-language talent show series “Tengo Talento, Mucho Talento,” who were awarded a Sony Music Latin recording contract and selected to be part of the Mexican regional band, Nuevo Elemento.

His summer plans will include looking for part-time work and a return trip to Sony Music Latin’s facilities in the Los Angeles area for additional recording.

Nor has Garduño abandoned his hopes of one day pursuing a law enforcement career. He said he expects to recommit to his studies for that purpose a few years from now.

The Nuevo Elemento band is scheduled to release an EP soon, which has been keeping Garduño busy. The band will be working with a lot of other popular artists for the album and appearing at Latin music awards shows to promote the EP’s release.

“It’s a very busy life being an artist,” he said. 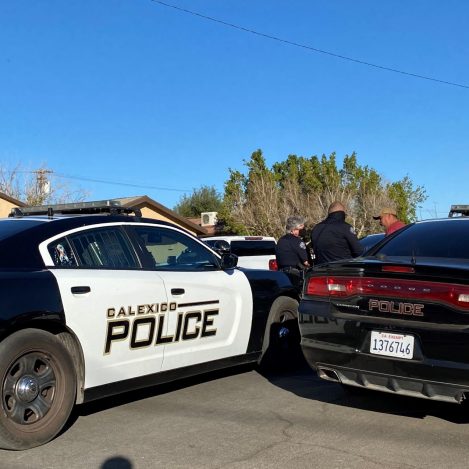 COVID Outbreak at Calexico P.D. to Bring in Outside Cops