COVID Exiled VWE for 15 Months, But On a Balmy Saturday Night, Lil’ Cholo and Company Were Back in Business. 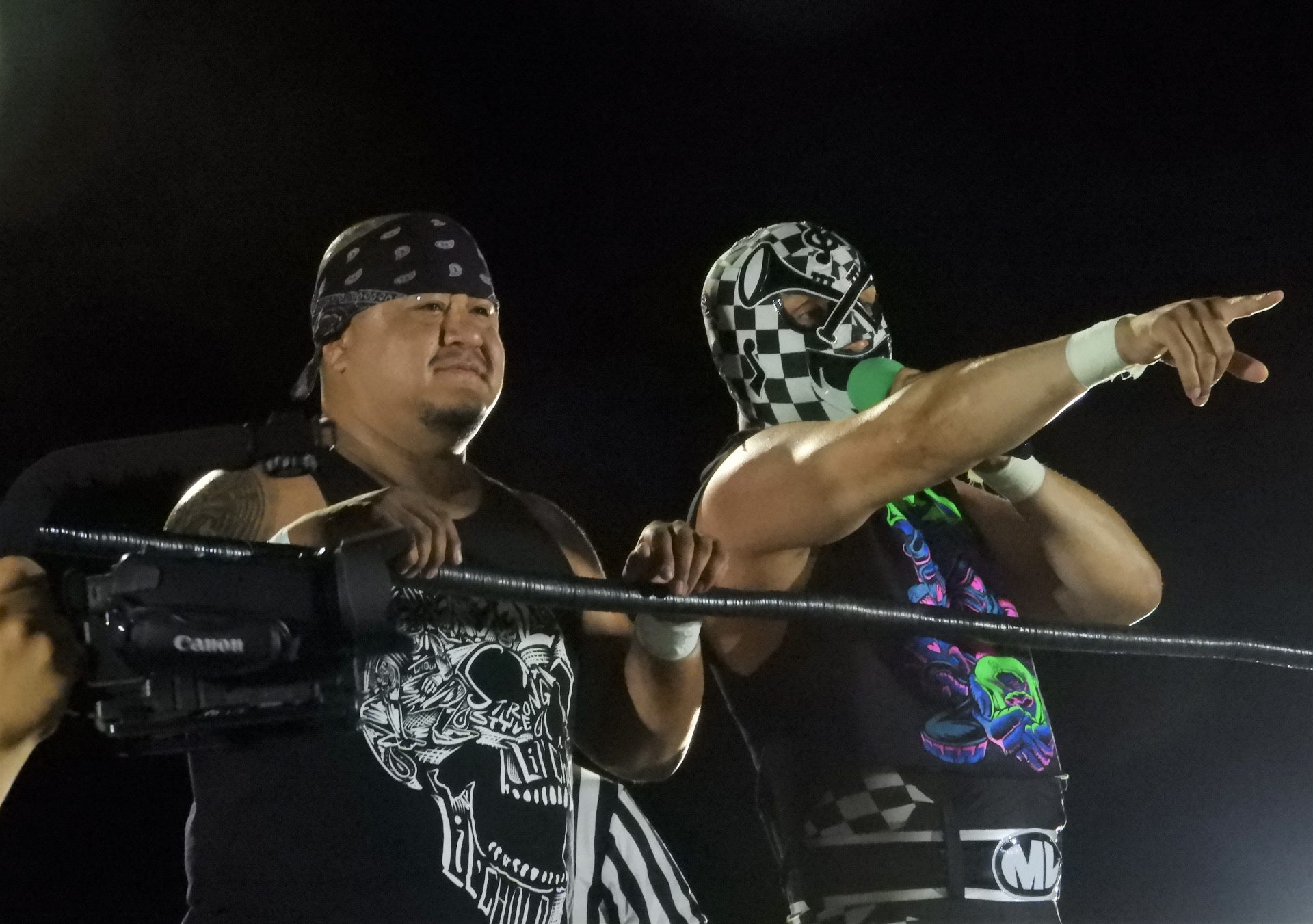 EL CENTRO — Danica Diaz watched from the edge of her seat, as the characters, the drama, and the stories of masked men doing amazing feats unfolded in front of her young eyes.

Not even the 9-year-old’s huge colorful Disney face mask could contain the grin on her face and the glint in her eyes as she waited for her favorite luchador.

“Mariachi (Loco) is my favorite, because he is the champion,” was all she could say before she breathlessly began to giggle … again.

Around 200 people of all ages showed up to cheer on and share their love for the different characters that came to the ring erected in the parking lot outside La Fonda Bar & Grill in El Centro on Saturday night, June 5, where homegrown lucha libre, or Mexican-style wrestling, returned to the Imperial Valley after more than 15 months of exile due to strict COVID regulations.

The shine of the bright lights, the sound of the music, and the smell of tacos filled the balmy night air. Voices chattered excitedly as people set up folding chairs in bunches for families trying to observe social-distancing recommendations.

Lil’ Cholo was excited to return as well.

“I’m so happy to be back. El Centro is like a second home to me,” said Lil’ Cholo, one of the signature performers of Imperial Valley-based Venue Wrestling Entertainment, which shut down local operations during the pandemic due to state and county health orders regarding gatherings of people.

If Public Health were a luchador, the masked men of VWE would have dropped an elbow on it from the top rope.

“We did shows once a month for five years,” said Jayson Hisel, owner of VWE. “Then boom. No more shows. We depend on this. I ended up having to host shows all the way in Yuma.”

Lil’ Cholo has been wrestling for more than 22 years, and got his start watching lucha libre on television. Lucha libre is a professional form of wrestling that focuses on over-the-top characters — the luchadores — and a high level of showmanship many people grew up watching on Mexican channels broadcasting from Mexicali.

“We’re glad to be here. No performance means no work, and for some of us this is how we take care of our family,” the second-generation luchador said in Spanish.

“I love doing this. The fans, the makeup, the booze, the energy. You can have a crappy day and come to this, and none of it mattered,” said Krazzy Chaos, who is originally from Juarez, Mexico.

Imperial County Public Health Department regulations weren’t the only thing that held VWE back from getting restarted recently. After the county allowed the show to go on, Hisel said he then had to find a location that would host his event.

While many venues were nervous to do so this soon after the easing of COVID restrictions, Hisel said he finally found a home for “Aftermath,” the name of Saturday’s event, with Antonio Camacho, co-owner of La Fonda, who was happy to fill this void in this community.

“I saw I need. A need to get out and relax and release from all of this COVID stress. I was thrilled to be able to give that to the community,” Camacho said.

One look at the sea of masked faces (not the lucha libre sort) and it was clear that there was a sense of life get back to normal. For the adults and kids alike.

John Glass of Imperial was excited to be out.

“I have been feeling really cooped up at home, and I’m tired of just sitting around watching Netflix. It felt good to be out to see something and eat some tacos and have a beer just like we used to,” Glass said. “I really needed this break.”

Another family came out Saturday night to celebrate their son’s 11th birthday, little Frankie Lara Jr. His older sister, Mischa Lara, excitedly talked about how much she liked being able to go out to somewhere different for her brother’s birthday.

“It’s great. We haven’t done anything like this in a long time,” Mischa said. “I’m so happy it happened on my brother’s birthday. Happy birthday, Frankie!”