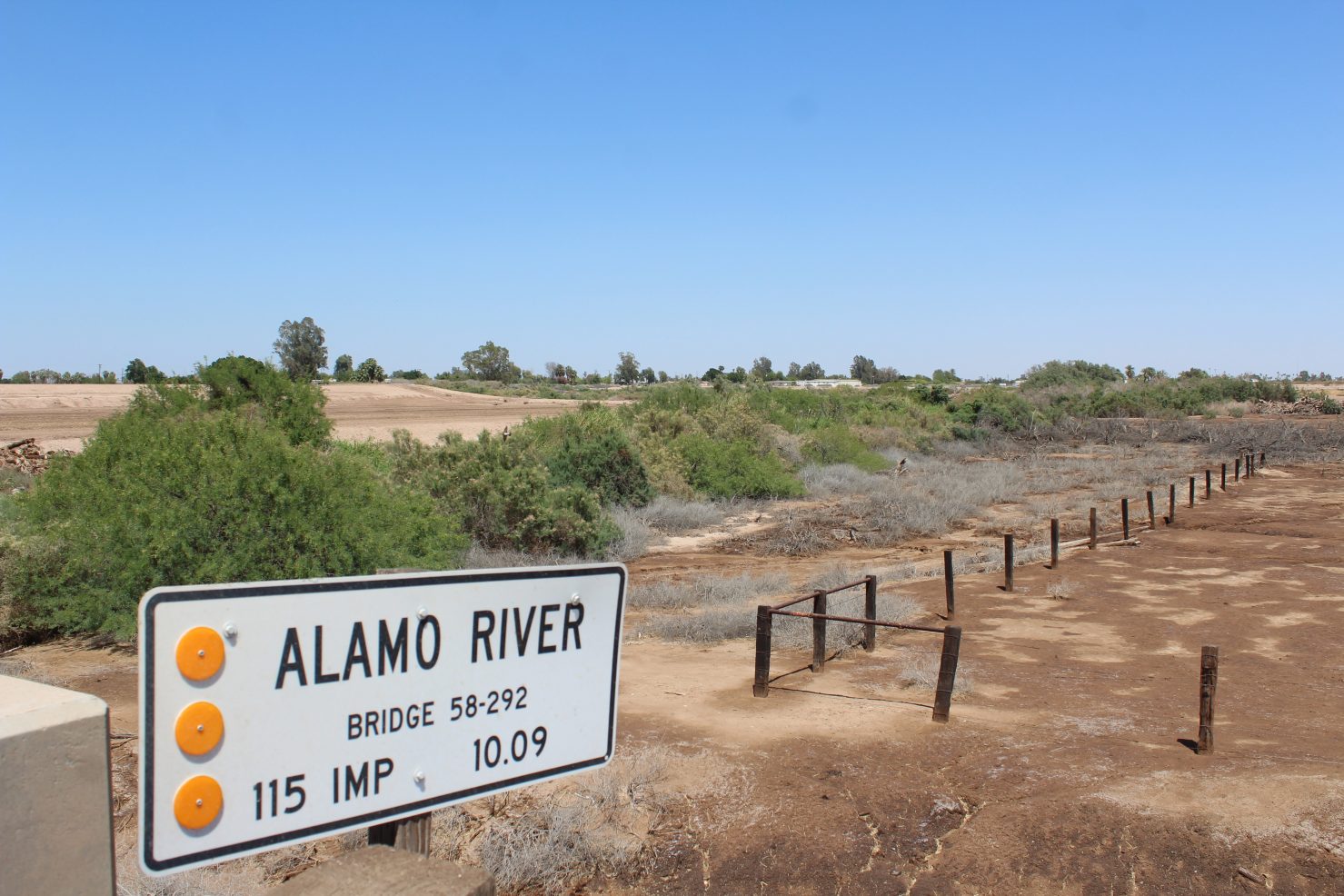 Chico-based River Partners is proposing an Alamo River habitat restoration project for about 60 acres of land along both banks of the Alamo River north of Highway 115 and extending north of Zenos Road. | CATHI PHILLIPS LARIOS PHOTO
Home
Regional News
In Regional News

HOLTVILLE — A proposal to restore 60 acres of habitat along the Alamo River would supplement two ongoing projects in the area: a long-delayed wetlands initiative and the expansion of the Pete Mellinger trail.

“I really think it’s going to be to spectacular be able to walk the whole length of the trail and see the (Alamo River’s) natural features,” said Holtville City Manager Nick Wells on Tuesday, May 11, of the potential for the area.

The Holtville City Council voted to support a nonprofit’s proposed habitat restoration project for an estimated milelong segment of the river during its regular meeting on Monday, May 10. The support was just the preliminary step for the proposed initiative.

The restoration project is being proposed by the Chico-based River Partners and would help restore habitat along both banks of the Alamo River north of Highway 115 and extending north of Zenos Road.

The nonprofit is seeking to partner with both the city of Holtville and the Imperial Irrigation District for the project, since the targeted segments of the Alamo River pass through both city- and IID-owned property.

Wells said that the proposed habitat restoration project would be a welcome addition and further add to the city’s outdoor recreational activities and appeal when combined with the wetlands and Pete Mellinger Alamo River Trail expansion projects.

Further discussions with River Partners representatives are expected and will help finalize project details, such as whether the nonprofit or the city will seek the requisite grant funds to finance the proposed project.

“Our involvement is kind of up in the air at this point,” Wells said.

The three council members who voted for the resolution in support of the proposed project included Mayor Mike Goodsell, Mayor Pro Tem Richard Layton, and Council member Ginger Ward. Council members Mike Pacheco and Murray Anderson were absent during the May 10 meeting.

Wells conceded that he was somewhat skeptical about the benefits of the city’s existing Pete Mellinger Alamo River Trail when it was originally proposed. But since then, its increasing popularity, beauty and uniqueness have convinced him of its value for the city.

The existing trail starts near the skatepark on Fourth Street, follows the Alamo River as it passes under the Orchard Road Bridge and toward the trestle bridge, where it then loops back into the city.

Once completed, the expanded trail project will also connect to the city’s wetlands project. The trail project calls for the creation a fork in the existing trail under the Alamo River Trestle Bridge that will allow users to continue along the top of the bridge, once it’s restored, and along the riverbank as it passes by the city’s wetlands project.

The city is currently awaiting contract documents from the California Natural Resources Agency, which provided a $1.2 million grant for the project, to proceed with the trail expansion project. The trestle bridge’s restoration will also be funded by a $720,000 settlement the city received as a result of a fire that had damaged the wooden bridge.

Additionally, the city’s wetlands project seeks to enhance the Alamo River’s natural habitat on about 27 acres north of Zenos Road and is being funded through a $3 million grant from the U.S. Bureau of Reclamation. Construction of the project is expected to get underway in August, following the conclusion of the burrowing owl’s nesting season.

A concept paper that River Partners submitted to the city in April stated that the habitat restoration project will be implemented over a four-year period. Once funding is secured, the planning and permitting process will begin and require about one year to complete, the concept paper stated.

While permits are being obtained, River Partners representatives will collect native plant cuttings and seeds from the Alamo River watershed and contract with a local nursey to grow the seedlings and deliver them to the project site as potted stock.

“Simultaneously, River Partners science staff will establish a pre-restoration biological baseline for plant and animal species located on the project site,” the concept paper stated. “The baseline data will be reviewed annually to determine the project’s benefit to biodiversity and changes in wildlife populations.”

Project implementation is estimated to get underway in the second year and include the proposed sites’ removal of invasive species, leveling the land and applying soil amendments and tree rows, and installing a temporary drip-irrigation system.

Once the drip-irrigation system is in place, River Partners will plant the potted stock, irrigate, and maintain the site through end of project, which is typically three years from planting, the concept paper stated. The nonprofit’s staff will also begin an ongoing monitoring and reporting program.

“Specific provisions in the project design will include a strong public open space and recreational component including interpretation of local cultural and/or biological resources and a trail allowing people to engage the space,” the concept paper stated.

Aside from the city-owned land north of Zenos Road, the habitat restoration project is seeking to use about 44 acres on two continuous parcels north of Highway 115 that belong to the IID.

To date, the IID has been working informally with River Partners, as no formal participation has been requested, IID spokesperson Robert Schettler said in an email on Tuesday, May 11.