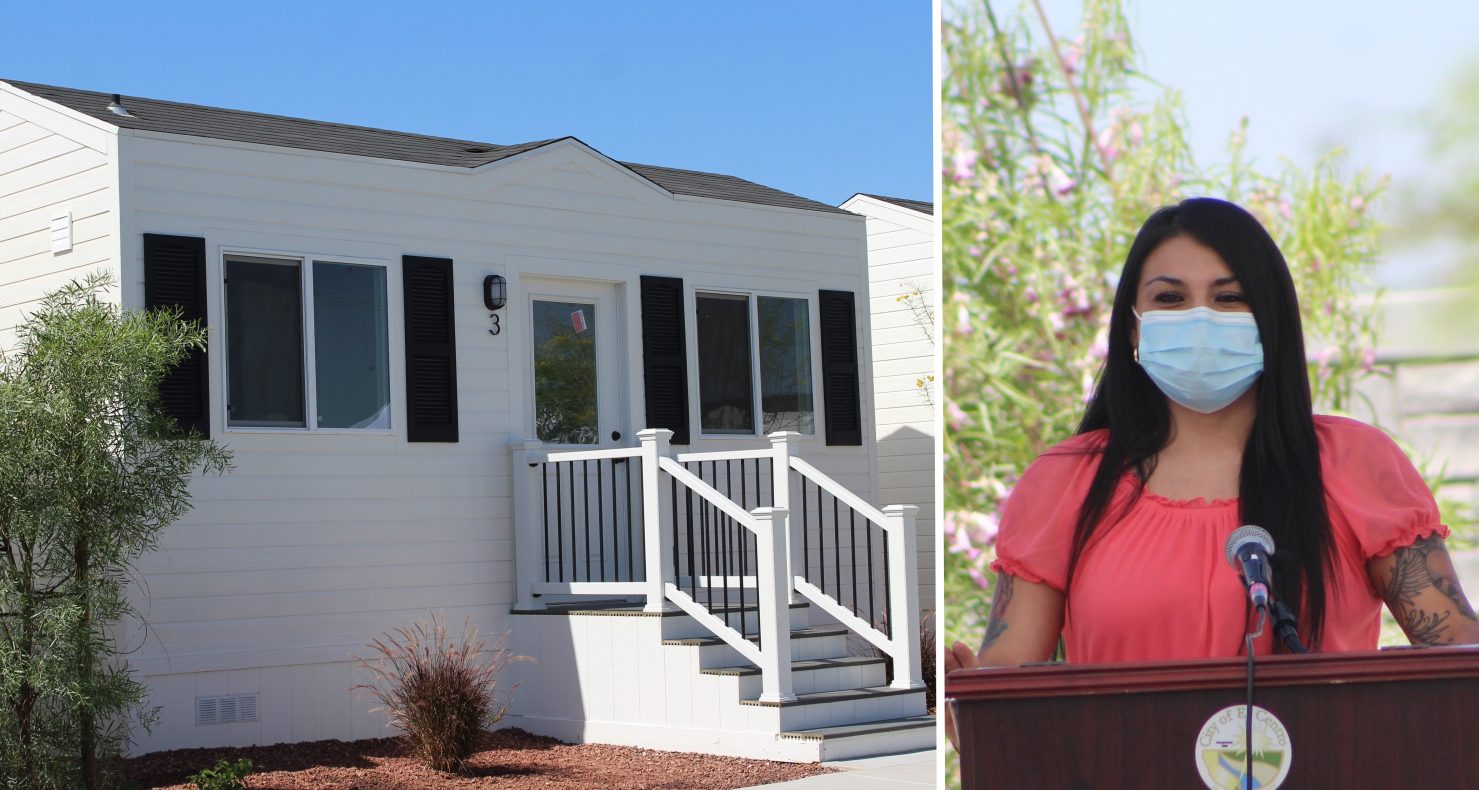 Imperial Valley resident Cierra Gibbs, 28, said she is on a short list of Imperial Valley College students who will become the first-ever tenants of the of 26 tiny homes that comprise the campus’ Lotus Living, Rise Above Resilient Community in El Centro. She spoke during a ribbon-cutting ceremony for the community on Friday, May 7. | CATHI PHILLIPS LARIOS PHOTO
Home
Regional News
In Regional News

At the time, she was facing some significant challenges, not the least of which was dealing with housing insecurity. And when she disclosed her circumstances to campus officials, they responded in a way that Gibbs said she could not have imagined.

“I marked a bubble in a survey that said I was facing housing insecurity,” Gibbs said. “Three days later they gave me the keys.”

The keys that Gibbs referred to were for a travel trailer that she has been temporarily occupying for the past two months at Desert Trails RV Park in El Centro. In September, IVC entered into a yearlong lease agreement with the RV park to help shelter students facing housing insecurity or being impacted by the COVID-19 pandemic.

Gibbs, who is currently taking classes to earn a certificate as a business office technician, said once her housing was secured, she was able to acquire a car and a full-time job as a receptionist, in short order.

She also said she is on a relatively short list of IVC students who will become the first-ever tenants of the of 26 tiny homes that comprise the campus’ Lotus Living, Rise Above Resilient Community.

An Inspiration for the Nation

The Lotus Living tiny homes initiative appears to be the first of its kind in the country designated specifically for community college students who are facing housing insecurity, IVC officials said.

Small wonder then that representatives of the campus, as well as El Centro and IVC Foundation officials, were highly enthused about their joint effort during the project’s ribbon-cutting ceremony on Friday, May 7.

Considering that 65 percent of homeless individuals become so between the ages of 18 to 25, the tiny homes will serve as a crucial lifeline in the community, IVC President/Superintendent Martha Garcia said.

And by investing in non-traditional students, stakeholders have helped further ensure that those students can contribute to the social and economic development of the Valley, she said.

Some 120 IVC students have identified as homeless, the campus previously reported. Campus officials had screened 91 students who had applied to live in the tiny homes village, said James Dalske, IVC interim dean of student affairs, enrollment services and campus safety.

The campus is expecting that number to be whittled down in about a month to the 26 students who will become the tiny homes’ initial occupants. Though a priority for housing has been placed on individuals formerly in the foster care system, not all of the tiny homes’ occupants are expected to be exclusively former foster youths, Dalske said.

Construction is being finalized at the site, located at 1998 N. 12th St. in El Centro, and students are not expected to move in until a couple months, IVC officials said.

The campus is also considering applying for additional grant money that would allow it and its partners to expand on its tiny home housing initiative.

“This is our first phase of that development of coming in and showing that it could be done here locally,” Dalske said during an interview following the ribbon cutting ceremony. “Hopefully, we can duplicate it once we show that this is a success and move it farther forward.”

The Lotus Living community was made possible with a $2.6 million grant the city of El Centro received, in partnership with college and the IVC Foundation, from the state’s Homekey Program.

The statewide program initially was allocated some $600 million by Gov. Gavin Newsom to identify and expand housing for persons experiencing homelessness and impacted by COVID-19.

On Tuesday, May 11, Newsom proposed the allocation of an additional $8.75 billion to expand on the Homekey Program. The governor seeks to convert existing buildings into 46,000 units of housing, according to news reports.

It Takes a Village to Raise a Village

If not for the collaboration among key stakeholders, it is doubtful whether the tiny homes project would’ve materialized in such a relatively smooth fashion, many said during the ribbon-cutting ceremony on May 7.

Aside from the state Homekey Program funds, the tiny homes village was also assisted by $458,000 of Homeless Emergency Aid Program funds awarded by Imperial County through the Continuum of Care Council, as well as a $524,114 grant from the Enterprise, a non-profit affiliated with the state’s Housing and Community Development Department.

Its undertaking represented a “perfect example” of how “extraordinary things” are possible when the community comes together, El Centro Mayor Cheryl Viegas-Walker said.

“That’s what happens in a community like ours that truly holds together as the underdogs that I think we always view ourselves to be,” Viegas-Walker said during her remarks at Friday’s event.

Echoing the mayor’s statements was Adriana Nava, the city’s community services director. During the ribbon-cutting, Nava praised City Manager Marcela Piedra, IVC president Garcia and past and present City Council members for having the foresight to undertake and follow through on such a student housing initiative, especially amid the COVID-19 pandemic.

“This was just a piece a dirt before, and now we have this beautiful little village,” Nava said.

Previous
Calexico to Get $622K in Grants for Facilities, Economic Development