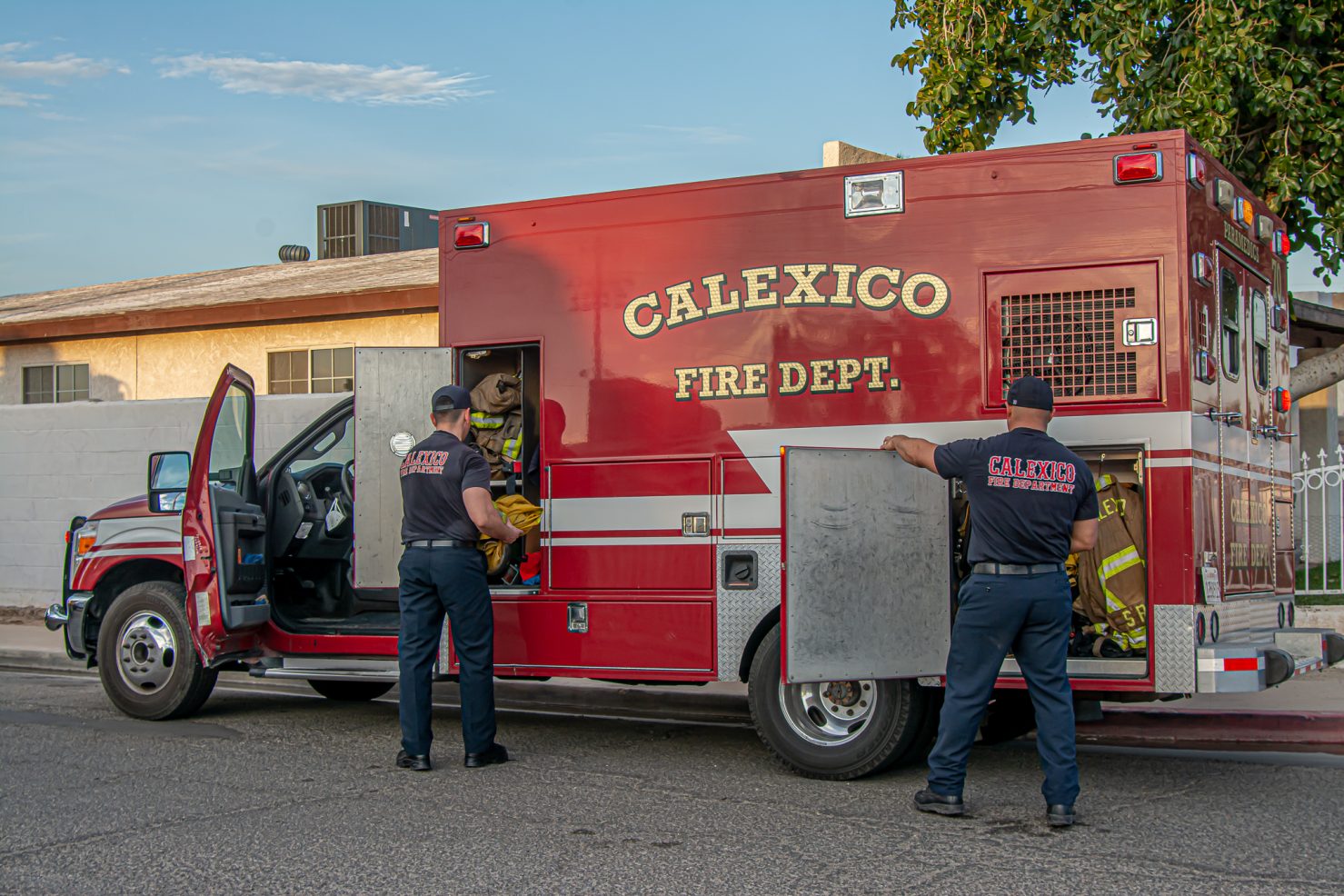 Members of the Calexico Fire Department stow gear in one of the department’s two ambulances some weeks back. Both city-owned ambulances are out of commission as the department struggles to maintain its fleet. One ambulance is being repaired and a purchase of a used one was approved last week. AMR ambulance services is helping Calexico in the meantime. | CAMILO GARCIA JR. PHOTO
Home
Featured Stories
In Featured StoriesLocal News

CALEXICO — The city’s “hospital on wheels” has been severely hobbled of late, with both Calexico Fire Department ambulances sidelined with major breakdowns while emergency crews serve patients with one loaner from AMR ambulance service and additional assistance from the county-wide company.

Yet help is on the way in the form of a “new” used ambulance that was purchased as part of a recent city budget amendment last week, and one of the two city units is due back on the road by next week with a new transmission and a new motor, Calexico Fire Chief Diego Favila said.

“This is not the best way to fix it. Unfortunately, our back’s against the wall,” Favila said during a City Council quarterly budget update where the seriousness of the department’s ambulance woes was conveyed.

“It’s a great need for our city, where obviously our calls have increased and we’re also trying to prepare in the event we do have an escalation in COVID cases,” the chief said.

In a populous city with no hospital, no after-hours medical services, and a high volume of calls exacerbated not just by COVID but calls for service from U.S. Border Patrol and Customs at the international border, a city of Calexico’s size and with its needs should have a minimum of four functioning units, Favila said: two on the road and two in reserve.

Calexico has no city-owned ambulances in service at the moment.

All of this news came as part of a wide-ranging discussion on the third-quarter changes and updates to the city’s budget and a subsequent budget amendment approved on April 21 that approved transfers and new purchases tied to the balanced financial document for fiscal 2020-2021, which ends June 30.

Moving forward with an immediate Band-aid on the situation for the Fire Department would not have been possible without the continued vigilance of city leaders and department heads to maintain spending controls on what city Finance Director Karla Lobatos continued to call a “conservative” but balanced budget that has been aided through the previous three quarters by better-than-expected sales tax and property tax revenues and cannabis revenues, coupled with leaving open some budgeted administrative and finance department positions.

And this comes despite what has been increased expenses incurred by some departments such as Calexico fire, which saw $135,625 in additional needed expenses through April 21. The budget period started July 1, 2020.

As part of the amended budget and update, the used ambulance will cost the city $64,000 (although budget documents say $60,000) and there are some $75,625 in additional department expenses that include uniforms, radios, and other related needs.

The ambulance situation will unfold in a number of ways. There is a cost and a timing element involved, Favila and Calexico City Manager Miguel Figueroa explained.

Favila said a new ambulance, which would cost even more than $64,000, would take the city six to seven months to even get. Figueroa said the used ambulance, through the city’s membership in a purchasing cooperative that legally sidesteps the bidding process, allows the almost immediate purchase of the unit.

While one of the two sidelined ambulances will be available by next week and is under warranty, Favila said, the damage to the second unit is such that it’s not worth fixing.

Figueroa told the council that he hopes the Fire Department will be able to enter into a leasing program next year allow to maintain expenses and increase fleet numbers.

“Leasing is how we should do it from now on,” Favila said, adding the Fire Department could conceivably get new ambulances every five years that way.

More on the Budget

Moving forward, the city is projecting a positive ending balance on June 30 of more than $1 million that will go toward the city’s emergency reserves.

“Although we are not making the leaps and (bounds) to grow our reserves as fast as we would want, we have reserves as a city,” said Figueroa, adding this is “significant considering the woes of the 2010s.”

He’s referring to the city’s continued financial solvency over the last year-plus after emerging though a dark period that reached its lowest point in 2016, when the city was being audited by the state controller’s office for poor financial controls amid a city general fund deep in the red to the point where the city had to borrow more than $3.5 million from its own water enterprise funds to keep afloat.

The city has since paid back that enterprise fund and is now working on growing its reserves, or it’s “rainy-day funds,” an effort that was made more complicated by the pandemic, which has affected all cities and counties in the state due to mass business closures in the early days of COVID, last spring and summer mostly.

As part of the newfound adherence to fiscal prudence, the city has revisited in detail its budget each quarter.

The major changes to the budget, which was and still is considered balanced, was an additional $3,302 making its way to the reserves, for a total projected reserve of $1,005,763 at fiscal year’s end.

The “big” numbers were the adjusted general fund budget increasing to $15,342,046. The general fund is the city’s main account that fuels salaries and benefits and major operating costs.

The quarterly update showed that although there was a savings of $323,500 to salaries and benefits ($9.78 million in expenses total) — mostly through leaving jobs already paid for unfilled in the finance and administrative departments — there has been an increase in operating costs of $423,500 ($5.56 million total).

The increases have been offset by a larger-than-projected infusion of Measure H funding, the city’s voter-approved sales tax measure that funds public safety-related costs and the general fund. The city is budgeting for $100,000 in Measure H proceeds to end the year.

Additionally, while “programmatic revenues” continue to suffer due to COVID, there are offsetting increases in other revenue sources, such as increases in projected cannabis, sales tax, and property tax revenues that total around $150,000.

Despite some skepticism expressed by members of the City Council about the validity of the budget cuts, expenditures, and projections, a former council member who was part of the dark days of financial instability gave the city its due.

“That fact that we have a million dollars in reserve … I commend you,” Imperial County District 1 Supervisor Jesus Escobar said, while warning the city to continue to be “prudent and strategic” in its use of the “artificial money” that has come to cities and counties through emergency COVID packages.

Escobar was on the council until he was seated to the county Board of Supervisors in 2019.

Relating the county of Imperial’s financial woes, comparatively, Escobar said the county used millions of dollars in one-time moneys in 2013 to fund ongoing expenditures that still plagues the county today.

“We are in a financial rut,” Escobar said, implying that Calexico does not want to find itself in that position.

Prior to Escobar’s comments, council members Camilo Garcia, Raul Ureña and Gloria Romo each expressed similar sentiments in questioning Finance Director Lobatos and City Manager Figueroa over the long-term financial plan the city has to ensure solvency, whether the current positional vacancies to maintain expenses are smart in the long run, whether the expenditures now are necessary, and whether Measure H funds are being used properly.

Garcia was particularly forthright in asking whether the numbers being presented to the City Council were actual figures or soft projections.

“We need to have a better financial plan,” he said. “Let’s not kid ourselves that we’re moving moneys around for a balanced budget … let’s work with real numbers, look at reality.”

Almost sounding offended, Figueroa said, “These are real numbers.” He added the accounting processes the city is using have been recognized by the state controller’s office as a consequence of righting past practices.

In answering the perceived misuse of Measure H funds, Lobatos reminded the council that the tax was passed by the voters to be used as a first priority on public safety and, as a lower priority, for the general fund overall. She said some $7 million-plus is committed to the monthly payments for the under-construction Calexico fire headquarters and other public safety costs.

With some of the future financial success of Calexico dependent on the easing of continued border travel restrictions that many thought would have been lifted by now, Figueroa said he does foresee a need to further adjust revenue expectations.

As the April 21 meeting approached three hours (again) and with several items still to be decided on the action calendar, the city attorney informed the council it could approve the rest of the agenda much like it does the consent calendar, where a blanket vote covers the lot of items of city business.

The nine items were approved unanimously.

On the agenda were letters supporting or opposing three issues of state legislation, including opposing Assembly Bill 1021, which was authored by Assembly member Chad Mayes, I-Rancho Mirage, and seeks nonvoting representation from Riverside County on the Imperial Irrigation District Board of Directors.

Another issue was the first reading of an ordinance on setting policies and procedures for the installation of “speed humps” in the city, or raised areas in residential neighborhoods that are intended to slow traffic in place of adding stop signs.

Prior to the start of the meetings decisions, the council heard a presentation from Jesus “Jesse” Gallardo, who asked for city contributions to fund his so far out-of-pocket expenses tied to his Calexico Independent Chamber of Commerce, which he said is working for the city during the vacuum created by the hiatus of the traditional Calexico Chamber of Commerce.

Also, the city recognized resident and longtime business owner Louis Wong for his years of service and dedication to the city through his restaurant Yum Yum Chinese Food, which he announced last month would not be reopening after the pandemic closure.

Following a proclamation read by Mayor Rosie Fernandez, Calexico Police Chief Gonzalo Gerardo thanked Wong for, among other things, when he fed police, fire, and city work crews for free in the wake of the April 2010 Easter Sunday earthquake.

Wong said this might not be the end of his work in the city but did not provide details.