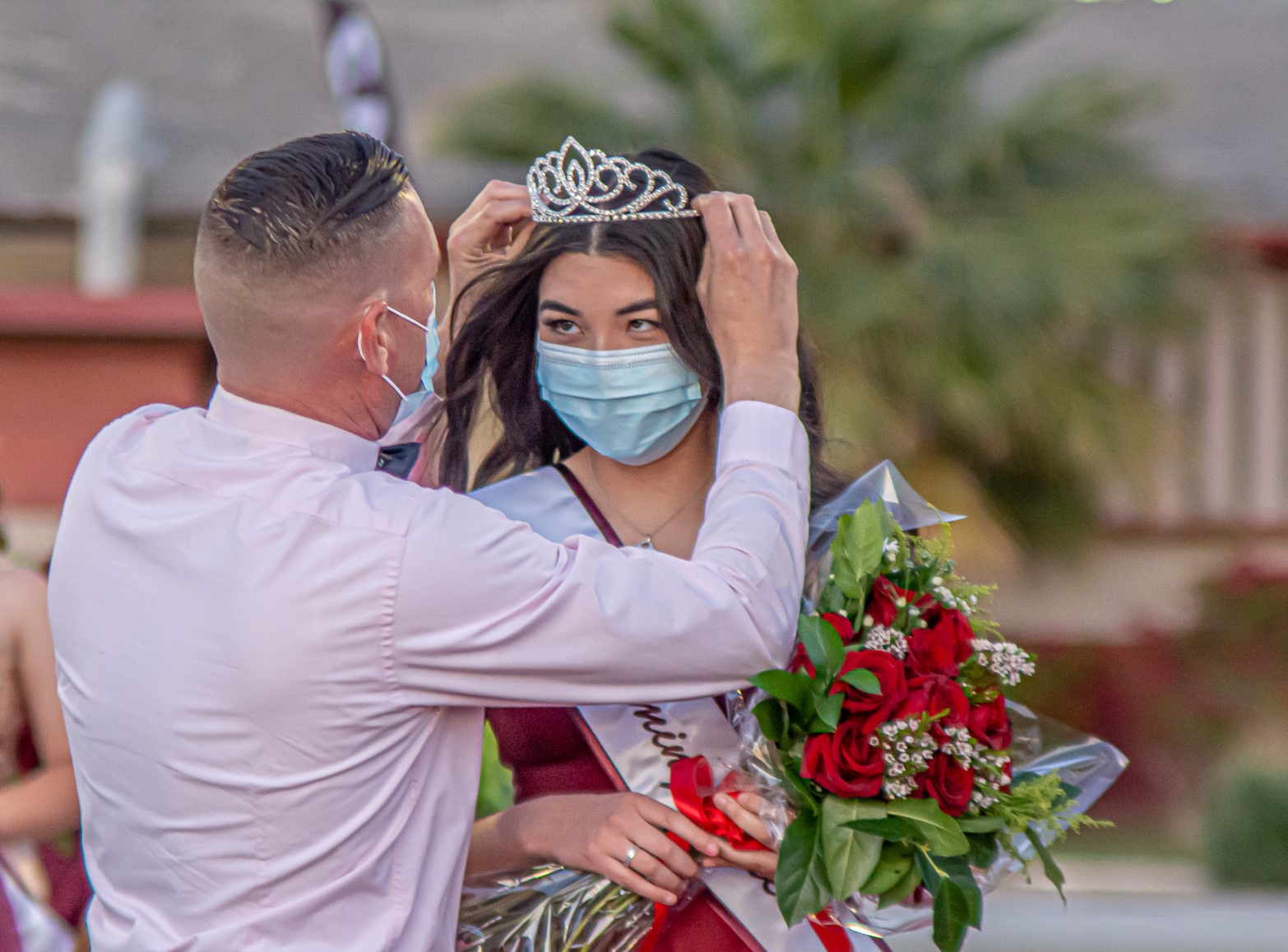 Calexico High School senior and the 2021 Homecoming Queen Valerya Medina, 17, has her crown placed atop her head by her escort and father, Cesar Campos, during a ceremony in the campus parking lot on Thursday evening, April 22. | CAMILO GARCIA JR. PHOTO
In EducationFeatured Stories

CALEXICO — As student life all over Imperial County slowly gets back to normal, some traditions are still essential to the high school experience — even with a modified twist — and homecoming is one of them.

Dressed in her red gown and escorted by her father, 17-year-old Calexico High senior Valerya Medina was crowned homecoming queen in a semi-private ceremony that brought students back together for an in-person event, albeit in new way, on Thursday evening, April 22.

“I’ve been dreaming about this since my freshman year, and I’ve wanted to run for queen … now that I’m here it feels so surreal, and honestly, amazing,” said Valerya, who was crowned by her father, Cesar Campos, after she chose one of two identical boxes, one of which designated the winner of the title.

The changes to homecoming involved combining what under non-COVID circumstances would have been football homecoming and winter-basketball homecoming into a single, drive-through event in which a random draw — the aforementioned boxes — determined the queen.

It was a unique event that also saw the organizers, the Associated Student Body, name an “athletic queen” for the time, an honor that went to Alexandra Esquer.

The 17-year-old Alexandra was escorted by David Esquer, her father. She is in varsity cheer, ASB Leadership, and is senior class secretary, and plans major in art history at college.

Queen Valerya is varsity cheer captain and is a member of the Asian Pacific Young Leaders Club and the Fashion Club. She plans to attend the University of Hawaii as a nursing major.

Ethan explained that the socially distanced event involved the traditional homecoming court ceremony, four class princesses and the athletic princess in a format in which one parent or a designated escort joined the court members outside the Calexico High campus in the newly constructed parking lot formerly known as Circle Drive.

As the Calexico drumline played and cheerleaders performed, other family members and close acquaintances got a chance to see the court during a drive-through set-up, the 18-year-old senior said.

For the student participants, the event was special because it brought them back to campus for an extracurricular nonsports-related event.

“Being back to a school event is cool. I get to reunite with my friends … talk to everyone else that’s in drumline,” said senior bass drummer Giancarlo Romero, 17, who was also a member of the Calexico Bulldogs football team.

“I get to interact; It’s just fun, man. Coming back to school means a lot to me,” Giancarlo added.

“Being back for an event in person is honestly amazing. I never thought I’d come back here. Just being here surrounded with my friends, my family, it’s honestly an amazing experience,” she said.

Seventeen-year-old Jossie, who was escorted by her father, Jesse, plays varsity softball and is the vice president of Calexico FFA. She plans to attend University of California, Davis to study animal science in hopes of becoming a veterinarian.

Victoria, 14, was escorted by Timothy Robles. Her parents are Priscilla Sandoval and Israel Vallejo. She plays softball and hopes to continue playing the sport at the collegiate level.

Kristen, 16 years old, was escorted by her brother, ASB President Ethan Noriega. Her parents are Nena and Frank Noriega, the school’s dean of students. Kristen plays on the varsity tennis team, is the sophomore class vice president and a member of the ASB Leadership Class. She also runs a small handmade jewelry business. After high school, she plans to attend Imperial Valley College and then transfer to University of San Diego to major in either psychology or business.

Seventeen-year-old Irma was escorted by Luis Viscara. Her mother is Irma Vega. During her free time, she enjoys art and plans to attend University of California, Los Angeles after graduation.

Maria, who is 17, was escorted by Marcos Castro. Her parents are Priscilla Ochoa and Marcos Ochoa. She is in varsity soccer, APYL Club, BULLDOCS (a club for students interested in the healthcare field), and the Bulldog Health Awareness Club. After high school, she plans to attend California State University, Los Angeles to pursue nursing.

“We are happy to have been able to put together a homecoming event for students this school year. We organized the event to continue our school spirit, tradition and recognize all athletes,” Calexico High Principal Gabrielle Williams-Ballesteros said in a statement. “We are well aware of the impact all students, including athletes, have encountered during these challenging times. I hope homecoming gave students a small sense of normalcy, togetherness, and Bulldog pride.

Calexico Chronicle Photographer and Videographer Camilo Garcia Jr., who contributed to the reporting of this story, is an 18-year-old senior at Calexico High involved with ASB as a member in charge of the audio/visual setup at events. He has also been the school’s photographer for sports teams and practices this year. 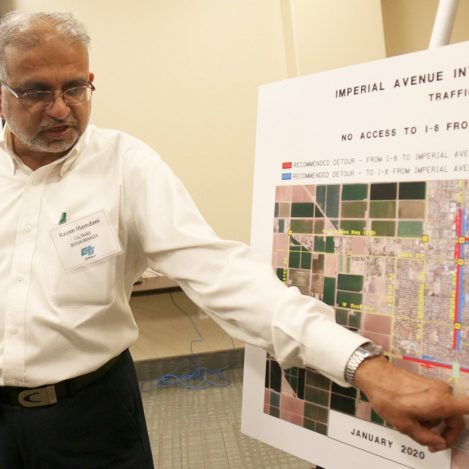