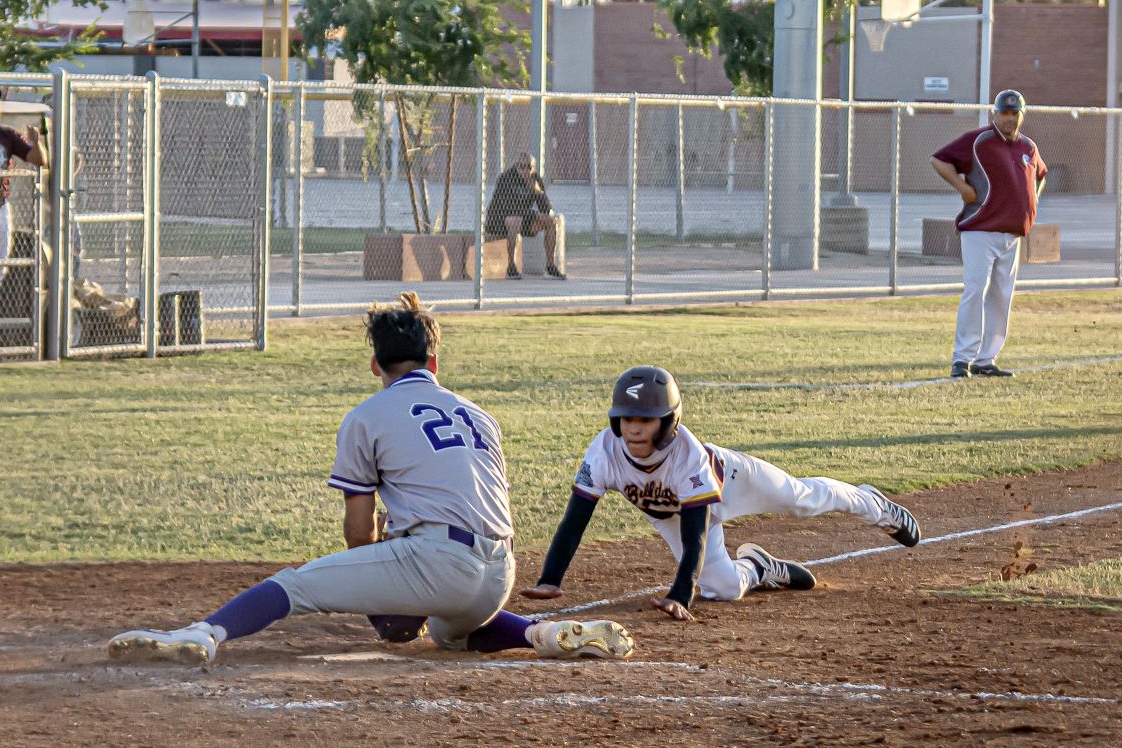 Calexico High School junior Jose Sanchez is out at the plate, getting tagged by Southwest High senior pitcher Danny Ramirez while trying to score on a passed ball during an Imperial Valley League game at Belcher Field in Calexico on Friday, April 23. | CAMILO GARCIA JR. PHOTO
Home
Sports
In Sports

CALEXICO — An early injury to an already depleted pitching staff spelled doom for the Calexico High School baseball team as the Bulldogs fell to Southwest High of El Centro, 8-2, in an Imperial Valley League matchup at Belcher Field here on Friday, April 23.

Calexico (2-5 overall, 1-3 in IVL action) had been shut out by the Eagles (7-3 overall, 4-0 in IVL), 5-0, on Tuesday, April 20, but started Friday’s contest looking good behind sophomore starting pitcher Orlando Llamas.

Llamas worked the first two innings and didn’t give up a hit, striking out three of the first seven hitters. It was in the bottom half of the second where things went bad for Llamas and the Bulldogs.

Llamas singled to lead off the inning, but during a pickoff attempt he was stepped on by the Southwest first baseman, dislocating his finger and damaging a fingernail on his pitching hand. He was taken out of the game for a pinch runner and would not return.

“For us it’s a matter of depth and inexperience,” said Ricky Guzman, Calexico head coach. “There’s a lot of inexperience on this team and to lose one of our best pitchers that early, it’s tough to overcome.”

Southwest jumped on the scoreboard in the top of the fourth inning, taking advantage of a single and two errors to go up, 1-0. The Eagles would add a second run in the top of the fifth when sophomore Anthony Molina crushed a solo home run over the centerfield fence to put Southwest up, 2-0.

In the bottom of the fifth, Calexico tied the game, 2-2, thanks to two singles and an error by the Eagles. Juniors Aaron Plazola and Jose Sanchez had the singles that sparked the two-run rally.

The lack of pitching depth showed for the Bulldogs in the sixth and seventh innings as Southwest scored three runs in each frame to pull away for the win.

A Golden ‘Genesis’ in Calexico

“Our guys are trying to learn the difference between winning and competing,” Guzman said. “We can’t afford to extend innings like we did in those final two and expect to win a game.”

Danny Ramirez got the win on the mound for Southwest, giving up two runs on two hits with seven strikeouts. Sophomore Nick Navarro took the loss for the Bulldogs, giving up five runs on five hits.