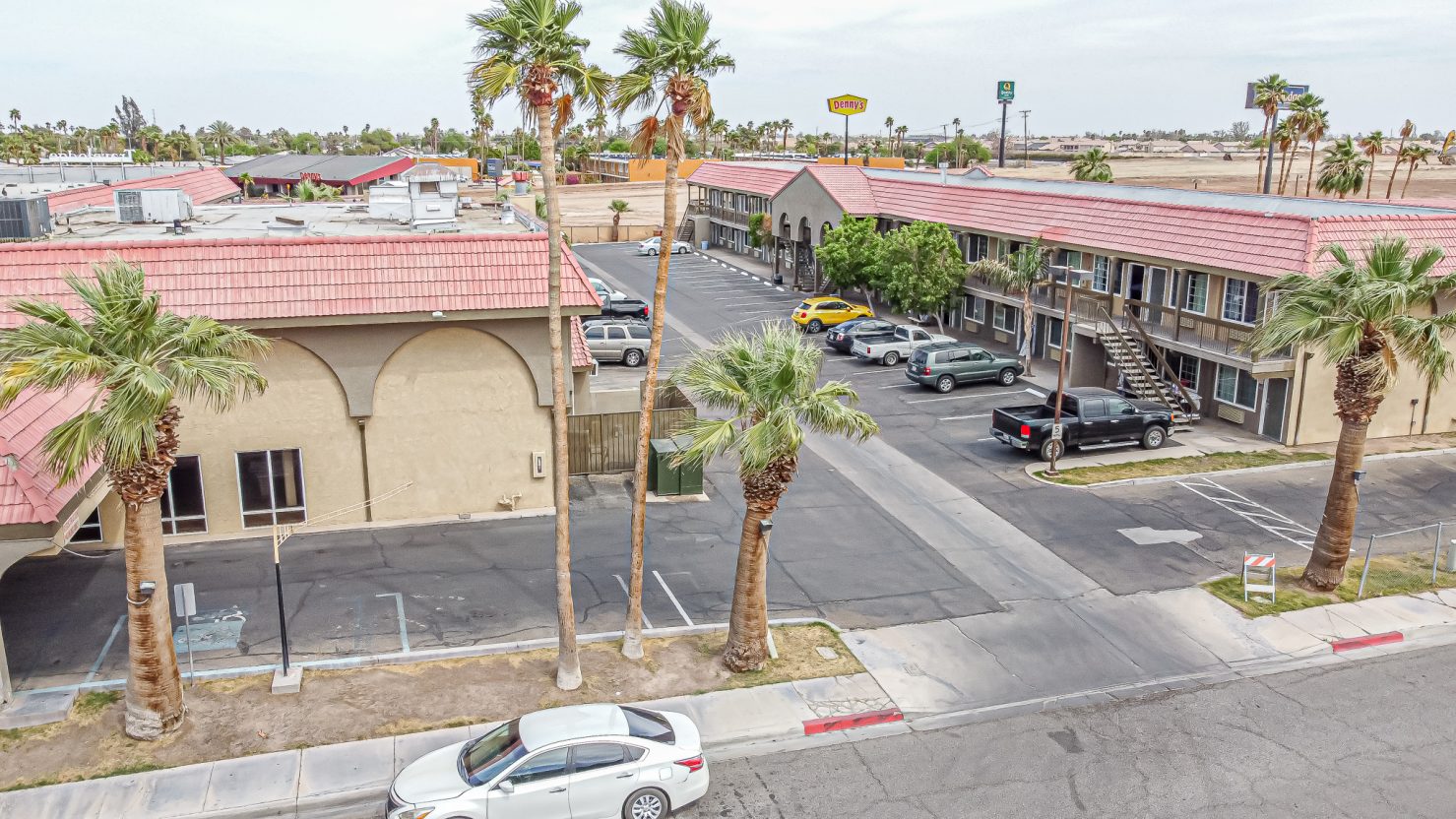 Like the Ramada hotel at the Barbara Worth Country Club in Holtville, the Travelodge in El Centro off Cottonwood Circle is functioning as a quarantine and isolation site for asylum seekers released from federal custody who are either COVID positive or who have been exposed. Both the Travelodge and Ramada in Holtville are being run by Catholic Charities, Diocese of San Diego, under a contract with the state. | CAMILO GARCIA JR. PHOTO
Home
Featured Stories
In Featured StoriesRegional News

For at least the next nine weeks, booking a room at either the Travelodge by Wyndham El Centro or the Ramada by Wyndham Hotel at the Barbara Worth Country Club appears to be a no-go.

That’s because both have been contracted through June 30 by the state to temporarily house asylum seekers that federal immigration officials have been releasing into the county.

With both hotels having apparently reached maximum occupancy, some local officials have begun to question whether the situation could represent a boon or a potential loss in transient occupancy taxes tied to the lodgings.

Mayor Cheryl Viegas-Walker posed that very question to her colleagues on the El Centro City Council during its meeting on Tuesday, April 20.

“I have no care who those rooms are rented to,” Viegas-Walker said during the meeting. “But if the state can make a unilateral decision to decrease our revenue, that’s not right.”

A transient occupancy tax, also known as a “bed tax,” is imposed on the overall cost of renting a room at local hotels and motels for guests that stay fewer than 30 days. The city of El Centro has a 10 percent tax.

There is an 8 percent tax covering the hotel at the Barbara Worth Country Club, which is situated in the unincorporated area of Imperial County a couple miles west of the city of Holtville.

As part of Viegas-Walker’s search for an answer, she had previously requested that Mayor Pro Tem Tomas Oliva reach out to state officials to get clarification about whether the city will receive the transient occupancy taxes related to the migrants’ temporary housing at the Travelodge.

During Tuesday’s council meeting, Oliva said that a representative of Gov. Gavin Newsom’s office was expected to provide a response by the end of the week.

Oliva also made it clear that the city’s inquiry was not driven by any opposition to the hotel’s current occupants, but rather a concern about a potential loss of TOT revenue.

“That is something we need here, we depend on,” Oliva said.

At the urging of Viegas-Walker on Tuesday, the city intends to send a letter to state officials requesting reimbursement of the TOT should the state indicate that the city will not be receiving the funds from the migrants’ hotel stay.

The matter of the TOT was briefly discussed toward the end of Tuesday’s meeting and was not an agendized item.

An analysis of the daily room rates and the respective TOTs of the city of El Centro and the county by this newspaper suggests that both entities would stand to gain about $21,000 in TOT over the course of a month.

Tuesday evening’s discussion represented the first time the El Centro City Council spoke in open session about the temporary housing of migrants in the city after it was informed by the county executive office that the Travelodge was being used for such purposes, Viegas-Walker said.

The effort by the city of El Centro is the latest in a series of local officials’ actions and pronouncements in response to the increased temporary housing in the county of asylum seekers who are in the process of being reunited with family or sponsors throughout the United States.

A Potential Boon or Bust

The county of Imperial is also uncertain whether it will collect the TOT related to the rental of rooms at the Ramada hotel outside of Holtville. The county has an 8 percent TOT in place.

It is not expecting to find out for certain whether it will collect the TOT from the Ramada hotel until sometime in July. That determination depends on the reporting, permitting, or request for exemption by the hotel operator, county Public Information Officer Gilbert Rebollar stated.

Any position that the hotel operator takes in regard to the TOT will be made explicit in its quarterly “TOT Return” form, corresponding with the months of April through June, that it has to submit to the county by July 31, Rebollar said in an email on Tuesday, April 20.

“It is then when we shall see if an exemption is requested or the total amount that is expected to be collected,” Rebollar said. “If the operator chooses to submit a TOT exemption form, our tax administrator will discuss with Counsel (the county’s) next steps.”

The two local hotels are part of four sites being contracted by the California Department of General Services (DGS) to temporarily house migrants in Imperial and San Diego counties as part of the state’s Statewide Travel Program and Asylum Seekers Program, a DGS spokesperson said.

The two San Diego-based sites include the Four Points by Sheraton San Diego and the Wyndham Garden San Diego.

At the Ramada hotel, the DGS contract stipulates that the hotel shall make available a minimum of 100 guest rooms per day for the length of the contract, which was ratified March 26.

The state is paying the hotel operator a flat rate of $90 per night for the use of the rooms, according to a copy of the DGS contract with hotel management.

At the Travelodge, the state is paying hotel management $71.66 per night, its contract stated.

The provisions of that contract required Travelodge to make available a minimum of 80 guest rooms per day starting April 5 and through the length of the contract, which was ratified March 31.

The contracts are scheduled to expire on June 30, when the Statewide Travel Program funding expires, said Monica Hassan, DGS spokesperson, in an email on Tuesday, April 20.

The DGS contracts, obtained through a public records request, do not appear to make any specific reference to transient occupancy taxes, but do state that aside from the daily room rate the state does intend to pay taxes.

The Other Sheltering Contract

On April 6, Catholic Charities ratified a $329,000 contract with the California Department of Social Services to provide wraparound services for the migrants being released into the county.

The nonprofit’s personnel had initially been deployed to the Travelodge to provide migrants with translation and interpretation services, three meals a day and hygiene items, coordination of medical services, travel coordination for the migrants to reach their destination, and transportation to the airport.

To do so, the organization had to hire multiple Valley residents so that its staff could be present onsite seven days a week, Catholic Charities reported.

Although the two local hotel housing contracts end June 30, with no information immediately available on whether they would be renewed or extended, the Catholic Charities contract is good through Feb. 28, 2022.

In the meantime, the state has taken over the medical screening and COVID-19 testing for the migrants that are being released into and temporarily housed in the county, Pajanor said in an email on Tuesday, April 20.

Much of that screening and testing had previously been performed at the Imperial Valley College Quarantine and Isolation Shelter, which closed its operations Friday, April 16.

The ongoing release into the county of migrants who might be COVID-positive or potentially exposed has been a point of contention for county officials since the state-led housing initiative got underway.

During the April 20 meeting of the county Board of Supervisors, it voted to ratify a letter county staff had already sent April 12 to U.S. Customs and Border Protection requesting that it establish a pilot COVID-19 testing program in the Valley much like the one the agency established at a CBP facility in Del Rio, Texas.

Previously, the El Centro Sector Border Patrol reported that until there is guidance from Border Patrol headquarters in Washington, D.C., the local sector will not be performing COVID testing on those immigrants it apprehends and subsequently releases into the Valley. 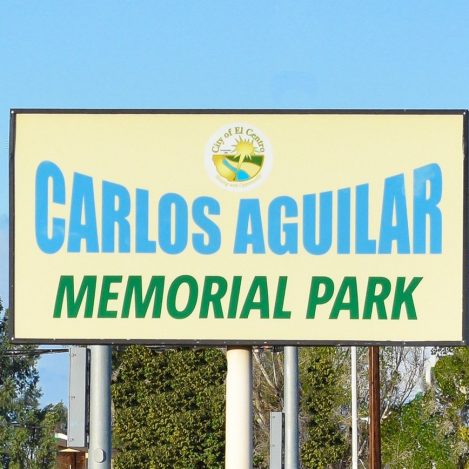