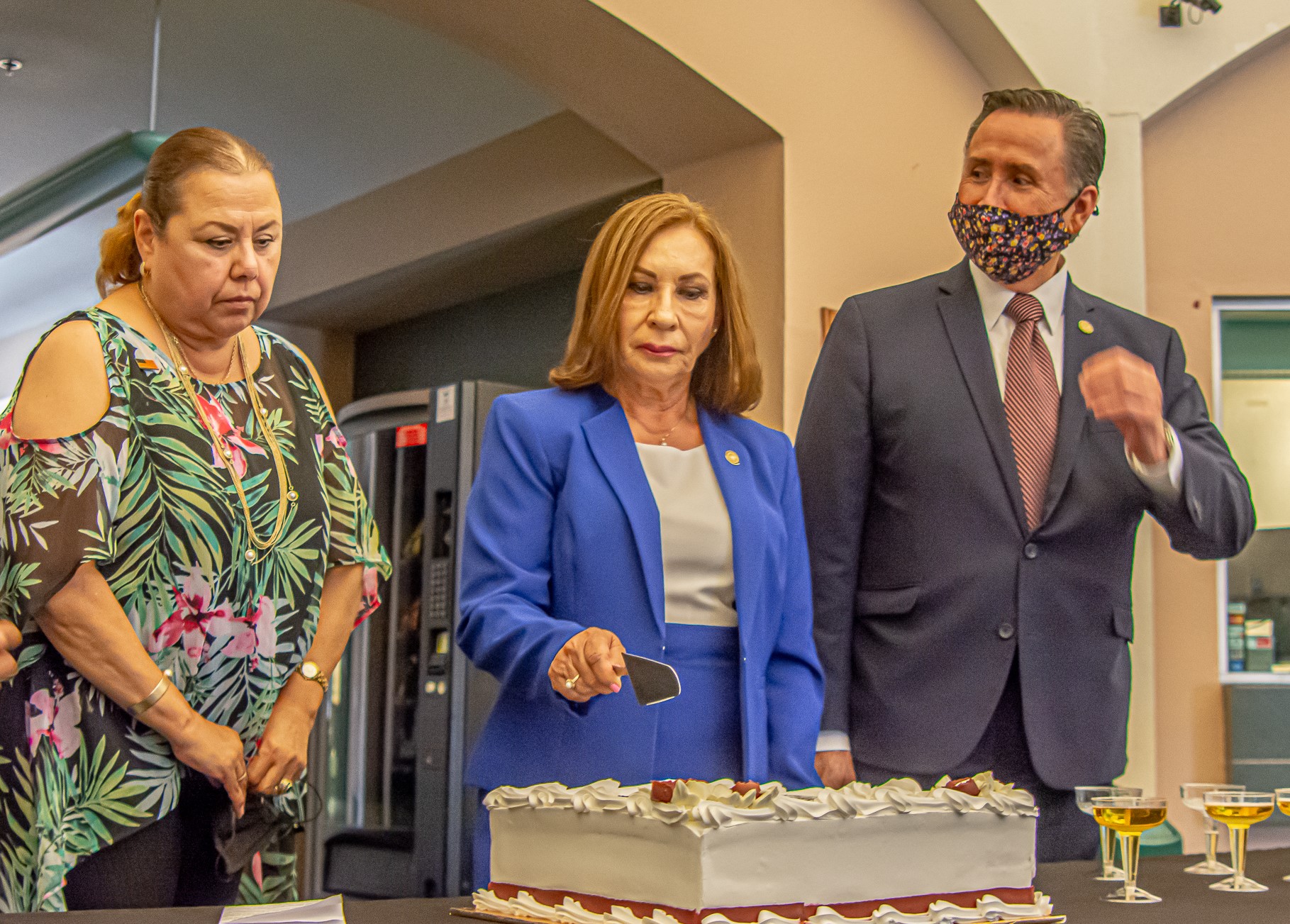 City was incorporated on April 16, 1908, a former tent city of the Imperial Land Company

CALEXICO — Even as most local Imperial County cities wait until the major milestones to celebrate their dates of incorporation, like the 100th, 105th or 110th anniversaries, the city of Calexico seems to make the most of its birthday nearly every year.

Have cake, will travel.

On Friday, April 16, Calexico Mayor Rosie Arreola Fernandez and three of her four fellow City Council members, gathered in a locked-down and physically-distanced City Hall lobby to commemorate the 113th anniversary of the city’s incorporation.

And yes, there was a fairly good-sized cake at the livestreamed celebration, along with several glasses of a bubbly beverage in plastic champagne glasses with which to toast the day.

“I am extremely honored and privileged to be with you on this important occasion for our great city,” Fernandez said. “Calexico is a vibrant and unique border city with a bright future. We continue to improve municipal services, bring attention to opportunities that will help address the needs of our business community, and the residents of our city.

“Although it has been a very difficult year due to COVID-19, we will forge ahead and continue to work for the benefit of our citizens and visitors. It is a huge responsibility that all of us, as city leaders, take very seriously as we serve you,” Fernandez said.

The mayor was joined by Mayor Pro Tem Javier Moreno and council members Gloria Romo and Camilo Garcia. Council member Raul Ureña was not in attendance.

Spaced along the circular lobby of City Hall were several others in attendance, who Fernandez introduced, including District 1 Supervisor Jesus Escobar, a former member of the Calexico City Council, and Division 4 Imperial Irrigation District Director Javier Gonzalez.

“All of us here have a chance to make our mark, and this is going to continue for hundreds of years,” council member Garcia said, adding that although COVID has tested the city, “now is the time for leaders to come together.”

Garcia emphasized that on this day in celebration of the city, it’s the city employees who deserve their due.

City staff make sure “service is available to us day in, day out,” he said, “getting up every day and going to work.”

To that end, toward the finish of the short celebration, Calexico City Manager Miguel Figueroa said, “I carry the voice of the workers, who right now are out on the field, at the water plant, at the wastewater plant, the laborers who are cleaning our city right now, my staff that are in finance right now, getting ready to pay vendors that provide us service, the staff that actually arranged this through the city clerk’s office, my staff in the city manager’s office, and I can go on and on.

“It is an honor and a privilege to serve the city of Calexico,” Figueroa continued. “I take pride in the work that myself and my staff do on a daily basis to make this a better place to live, a better place to visit.

“We have a long ways to go … but I believe that we’re on a path that is going to allow us to give our community what they deserve,” he continued.

Running with the theme of unity, Supervisor Escobar spoke of a city united to do great things and looked to former council member and Mayor Lewis Pacheco’s inspiring words when Escobar first took office as a Calexico council member.

“Council member Pacheco quoted JFK, and switched it around and said, ‘Ask not what your city can do for you, but ask what you can do for your city,’” Escobar said. “I think that’s what needs to resonate for us to really take the city to the next level.”

Unfortunately, the virtual celebration was marred in the early going by technical difficulties. Much of the audio feed at the start of the Facebook Live stream on the city’s social page was too low to discern, punctuated with moments of thunderous feedback, and the signal was glitchy, starting and stopping.

The event was also supposed to be on Zoom, but the link sent out by the city was on an invitation without a live hyperlink to join the webcast.

Some of those watching live on Facebook commented in real time about the Zoom link and sound issues, and at least one person took an opportunity to take a potshot at the city.

“Are you celebrating that councilmembers have transformed downtown’s Alleys into Public Restrooms? Are you celebrating the lack of responsabilité in action to make Calexico better! There is nothing to celebrate now,” commented a viewer identified as Hugo Castro, the immigrant and farmworkers rights activist who was living at the encampment at First Street and Andrade Avenue that was recently cleared out by city police on April 7.

Castro, who is credited with establishing the encampment in late January, was placed in handcuffs and taken to the Calexico police station the morning of April 7, where he was cited and released for failing to comply with a police officer’s commands.

One of the men who had Castro taken away that morning, Calexico Police Chief Gonzalo Gerardo, was also watching the celebration online. He commented almost immediately after Castro.

“Glad to be a part of the 54 years in the 113-year anniversary. Viva Calexico. Time to move forward,” the 54-year-old chief commented.

It has been a difficult calendar year for the city. The 112th anniversary passed without much fanfare in 2020, as Calexico was in the grips of the earliest wave of the pandemic, when scores of businesses were closed and the border city had among the highest number of COVID-positive cases at the time.

Since the start of the pandemic in late February 2020, Calexico has been the hardest-hit community by the disease, with 7,084 total cases and 227 deaths. Even today, Calexico leads the Valley’s other cities in active COVID cases by almost double the nearest city. There were 83 active cases on April 16; El Centro, the next largest city, had just 49 active cases.

Still, there was cause for celebration, amid a pandemic, as more Calexico residents are being vaccinated, more areas of the business sector are opening, and more areas of life are returning to some semblance of normalcy.

Even as city officials celebrated in City Hall, dozens of farmworkers and others were receiving doses of the vaccine at “El Hoyo” in Calexico, the area of the city where the former Vons was located on West Second Street/Anza Road. Pioneers Memorial Healthcare District in conjunction with Salud Sin Fronteras and the local office of the United Farm Workers helped inoculate more than 315 people.

City Manager Figueroa closed out the celebration, leading to a toast and the cutting of the cake.

“I want to make sure that regardless of the situation we are going through right now with COVID-19, that a very special day such as the anniversary of our city didn’t go unnoticed, and I believe that with the presence of the partners that are here with us today, it’s a sign of what we need to do, which is come together to get things done,” he said.

Previous
Brigadettes Change It Up with First Ranch Ride