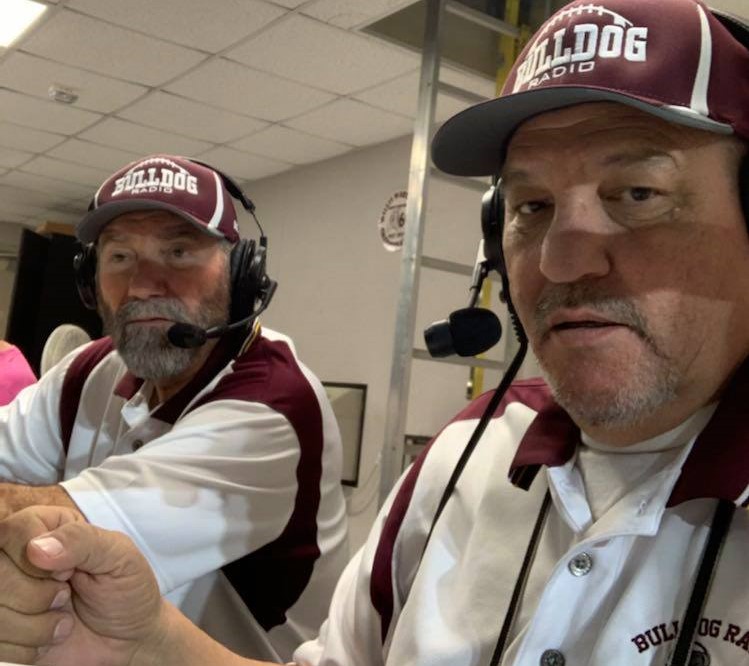 Victor Carrillo (left) and John Moreno, the voices of Bulldog Radio for 27 years, will do their final radio broadcast on Friday night, April 16, when Calexico High takes on Vincent Memorial in the fourth Battle for the Border game. The pair will return next season as members of the Valley Sports Network crew, broadcasting livestreamed game. | COURTESY PHOTO
Home
Featured Stories
In Featured StoriesLocal NewsSports

CALEXICO — “From the Chocolate Mountains to the Sea of Cortez, up and down the border, on a Friday night, it’s Bulldog Radio.”

John Moreno first uttered those words on Sept. 15, 1994. It was his second year of radio broadcasting live Calexico High School Bulldog football games. After recruiting his cousin, Victor Carrillo, the duo would go on to become Friday night staples and the voices of Bulldog radio broadcasts for 27 years.

On Friday, April 16, Moreno and Carrillo, or “John and Vic,” as they are known to many, will broadcast their last game on the radio during the fourth revival of the Battle for the Border tilt between the Bulldogs and crosstown rivals, the Vincent Memorial Scots.

It will be “difficult to broadcast knowing that we will be ending this chapter,” Moreno said via a Zoom interview alongside Carrillo.

The final broadcast, on AM 990 Rocola XECL out of Mexicali, can be heard live on CalexicoChronicle.com and HoltvilleTribune.com

Moreno said he remembers how he was given “a crash course in radio broadcasting,” as he put it. Come up with a station ID, have your notes in order, enunciate, be monotone, and be objective, he said, rattling off his list of must-do’s.

Moreno said he would listen to Lee “Hacksaw” Hamilton, who would broadcast San Diego Charger games. The mandatory station identification he uses is a take on Hacksaw’s “from Baja to the Canadian Rockies.”

Moreno said he listened to the broadcasters of 1090 AM radio station. After doing the job alone the first year, he knew to succeed, he would need help with the broadcast. As Moreno provided the play-by-play and color commentary, Carrillo would concentrate on player involvement, stats, and history, and being objective.

Carrillo and Moreno’s vast knowledge of Imperial Valley football, especially Calexico football, is undeniable, but Carrillo was quick to give credit where credit is due. He praised the help of Mike Charles, who shared year-by-year trivia on Bulldog football history.

Growing up in the Imperial Valley, Moreno and Carrillo would learn about every school’s history and the players who built those teams. It is this knowledge that has won them praise from the Calexico loyal, but also from fans and coaches of opposing teams, who “appreciated that we gave shout outs to their players as well as our own,” Carrillo said.

It is this objectivity that will propel them to the duo to its next venture. Just because they are saying goodbye to radio broadcasting, doesn’t mean they’re leaving the airwaves.

Moreno and Carrillo will be trading in their analog radio waves for a digital platform of video livestreaming come fall 2021, becoming a second crew and second weekly game under the banner of Valley Sports Network.

VSN founders Will Torrez and Ron Rubio will broadcast one game a week mostly toward the central and north end of the Valley, while Moreno and Carrillo will run a south county game.

It’s a major change in direction for Carrillo and Moreno, who said they had seen the writing on the wall and understood that this move was inevitable. It was going to happen regardless of if they wanted to be a part of it or not, the pair said.

Some 27 Years of Memories

Moreno and Carrillo shared many stories of mishaps, forgotten cords, and everything that could go wrong along the way. A favorite yarn occurred at Hilltop High School in San Diego, when they once noticed that there were no LAN line connections that are necessary for live radio broadcasting.

With the Hilltop football field nudged up against a neighborhood, residents in the area often watched the games from their windows, setting up carne asadas and drinking beers. One such local saw the confusion between Moreno and Carrillo and volunteered the use of a 60-foot LAN line extension and hook up. Their former radio station, KICO in Calexico, paid the bill for using the resident’s phone line for two and a half hours.

Moreno expressed gratitude to a list of people who assisted in making the broadcasts possible, including the many sponsors and administrators.

He also remembered a halftime show in which they interviewed the late Rollie Rodriguez, who they replaced in 1993. They spoke countless praise to their predecessor, “the original voice of Bulldog football.”

In a sentimental memory, Carrillo and Moreno spoke of a home game against the visiting Holtville Vikings they broadcasted in which they praised the play of Joe Iten of Holtville.

The Viking quarterback was having an inspired game, and Carrillo acknowledged that. He also made it personal, as he recounted the days when Joe Iten’s father, Larry Iten, was a naturally gifted, stellar sportsman for Calexico in the mid-1960s. Carrillo said Larry Iten excelled in every sport and had an opportunity to participate in professional baseball. Unfortunately, Larry’s father was in a car accident and Larry chose to leave his dream behind to help with the family farm, they said.

A listener from Holtville heard all the praise given to Joe and the care Carrillo gave in remembering Larry’s prowess on the football field and baseball diamond, which was in turn related to Larry’s mom. She got a hold of Carrillo and asked if she could hear the tape of the broadcast, and he obliged, giving her a copy.

As the final second tick off the clock of Friday’s final Bulldog Radio broadcast, no matter which team on the field emerges the winner of the Battle for the Border, it’s Victor Carrillo and John Moreno who will have won the hearts and minds of their longtime listeners. With gratitude and objectivity. Like they have for 265 games. 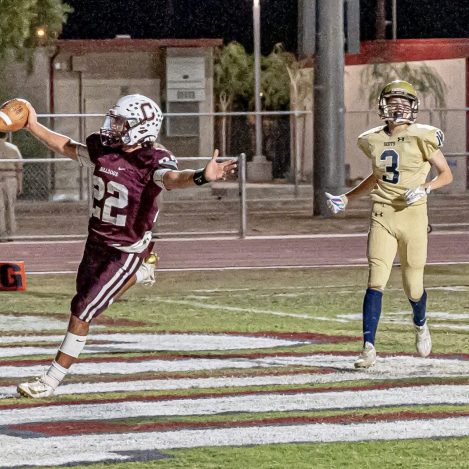