Calexico Poet Gets ‘Lost in Thought’ 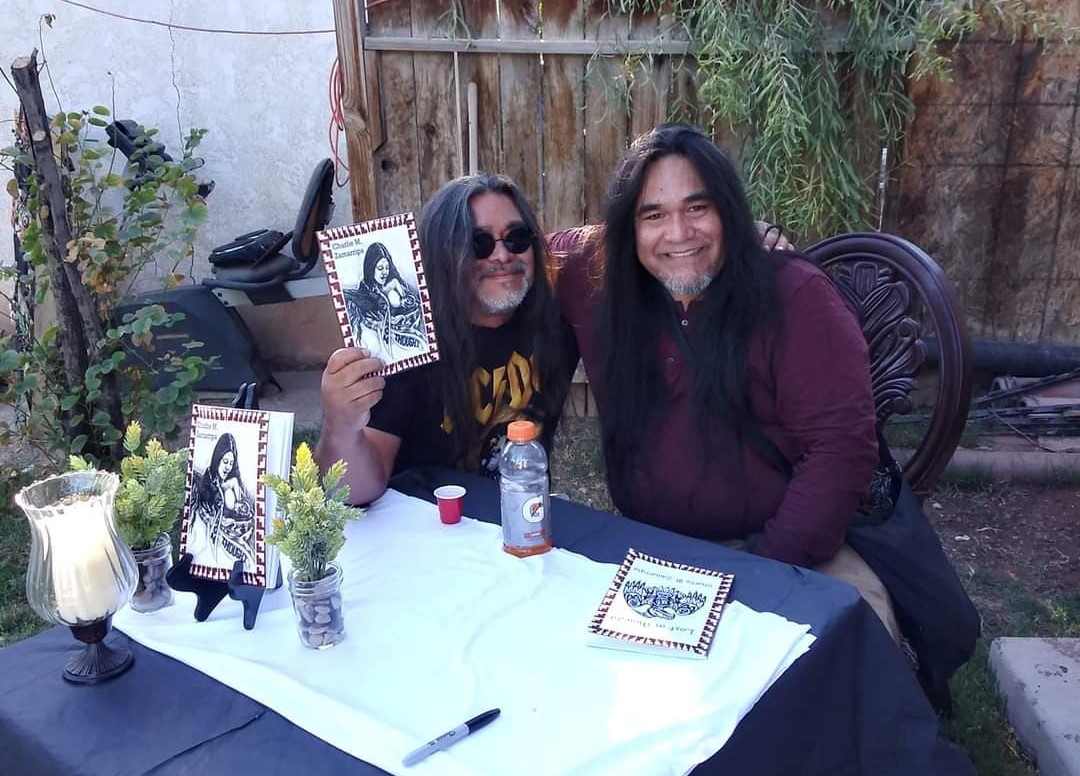 CALEXICO — That Iron Maiden’s heavy-metal adaptation of Samuel Taylor Coleridge’s seven-part “Rime of the Ancient Mariner” would plant the seeds of a junior-high hesher’s lifelong love of poetry is apropos.

Apropos in the sense that some 15 years later, this child of the border, Calexico native Charlie M. Zamarripa, would wake from a fever dream to pen his own fully realized seven-part epic, “The Tragedy of Crazy Bear,” portions of which fill the pages of his first published volume of poetry, the recently released “Lost in Thought.”

His tale of inspiration is as vivid and outlandish as Charlie himself.

“I like telling the story because it’s so strange,” he said of the night he awoke with a voice speaking in his ear. “It was really awesome. It never happened again, but I wrote it all. I was trying to sleep but the voice kept saying, ‘Get up now.’”

He did get up and wrote it all down until the sun came up. That was at age 29. Now 50 years old and a father of four, Zamarripa has finally seen his seemingly divine inspiration get an earthly foothold thanks to his relentless spirit and the vision of his publisher, a Brit name Steve Cawte.

“What has always inspired me about Charlie is the fact that he is his work,” Cawte said during a telephone interview from the United Kingdom. “That character is reflected in his work … He is open and honest, and he is not afraid to allow all of him to be present in what he writes.”

These types of “warts-and-all” authors, poets, and creators, Cawte said, tend to be the most authentic. “He shared both the polished persona of a writer, and the honest and vulnerable and unrefined parts of himself in equal measure,” Cawte explained.

“Charlie’s work is a mixture of an understanding of place, heritage, customs and himself,” he added. “That raw and open approach makes him someone I just enjoyed reading.”

Zamarripa’s book, “Lost in Thought,” which was released on March 28, just few days shy of April’s distinction as National Poetry Month, has been a lifetime in the making.

For some years now, Zamarripa has submitted his poetry to multiple publications, yet it was the small publishing house, Impspired (yes, that’s “Imp-spired”), and Cawte’s movement from an online-only platform, that afforded Charlie the chance to be on bookshelves, or at the very least, on Amazon.

And lest people think this was a vanity pressing, or a “pay-to-play” proposition, as it were, Zamarripa did not pay to publish and will earn royalties on his work.

Recently, on April 3, to celebrate the release of his book, a friend held a book signing in El Centro in their backyard, where the personable and quirky Zamarripa got the opportunity to hold court and gather with family members he hadn’t seen in a quite a while, like his elder brother, 52-year-old Paul Zamarripa, who lives in Brawley.

“I hadn’t seen my brother in over a year, and with him there, I don’t give a (flip); I had a great time,” Zamarripa said of the lowkey turnout. “In total, eight people showed, but my brother was enough for me.”

Charlie hopes to have a hometown book event soon. He said he’s trying to swing a signing at the Carmen Durazo Cultural Arts Center adjacent to the historic De Anza Hotel.

From an Albatross to a Crazy Bear

A 1989 graduate of Calexico High School, Zamarripa’s journey from punk kid to published poet had its roots in heavy-metal happenstance.

Twelve-year-old Charlie, in his attempt to outfox his seventh-grade English teacher, and prey on an unfamiliarity with the intricacies of England’s Iron Maiden, recited a “poem” he already knew.

“I just wanted to cheat,” Zamarripa said with a laugh. He and a friend agreed to recite the lyrics to Iron Maiden’s “Rime of the Ancient Mariner,” an adaptation of the 1834 piece by Coleridge about a sojourn at sea.

“I didn’t know what to look for, my friend said (the original poem) was super long. But I could remember the lyrics because (the Iron Maiden song) was seven minutes long,” Zamarripa said. “We knew it already; we’d been singing it forever.”

Yet his go-round at gaming the system kind of backfired, as a love of poetry was born from that moment, never to let go.

It wasn’t until he went back to college in his early 20s that he started to do more than admire the art, developing that love into something deeper.

Zamarripa was reading a lot of work on his own, and when he took one of Jeanette Shumaker’s classes at San Diego State University-Imperial Valley campus, it was “at the end of the semester we had to produce an anthology,” one of his early forays into finding his own voice through writing.

The title of that anthology — a play on another poet’s work (who just happened to be the Lizard King Jim Morrison of The Doors) — was “Writers on the Storm.”

Around this time and briefly after, Charlie would get married (and divorced), find his mystical groove at 29, when the waking dream that led to the seven-part “The Tragedy of Crazy Bear” came to him one night, and he’d graduate from SDSU-IV with a degree in English in 2000, in no particular order.

Admittedly, Zamarripa would be the first to tell you he’s been a wayward soul, having seen his writing stop and start in fits of creativity and long periods of not doing much at all. He’s also had a brief dalliance with teaching that didn’t turn out too well.

He became the person in the family that everyone believed would never grow up. “When I hit 30,” Zamarripa would say, “I’m going to take things seriously.” It took a few more years, but eventually he’d find his creative mojo.

It would take the better part of 20 years for that to happen, though.

One person who has known Zamarripa through that period has been a former instructor at San Diego State and longtime friend, Bret Kofford, who contributed a quote for the cover of “Lost in Thought.”

Kofford, a former newspaperman and a published screenwriter himself, said Zamarripa was memorable from the time they first met, and they shared in their kindred obsessions of music and film.

“I think people who write in any sort of professional way, people who pursue writing, they can hear the music in other writers’ writing,” Kofford said. “There’s people who are confident writers, but they don’t have that music to their writing. Charlie’s always had that.”

From Zero to Sixty

It was less than a year ago when Zamarripa’s fortunes took an upward arc, a direct result of him joining a Facebook poetry society in July 2020.

There, he honed his craft through workshopping and caught the attention of Impspired’s Cawte, who at the time was running an online-only bi-monthly poetry magazine and a quarterly anthology.

In short order, Cawte was tabbing Charlie to publish a few poems, first in issues seven and nine of the magazine, starting back in October, and eventually, in Cawte’s quarterly anthology in January.

By early February, Zamarripa was one of the more popular writers on Impspired’s website.

“Just wanted to let you know, that after looking over the stats for January 2021, you were in the top-10 most read authors on our site,” Cawte wrote to Charlie in an email.

The two became offline friends as well, and after Zamarripa introduced Cawte to “Crazy Bear,” the publisher offered the poet a contract nearly on the spot. Charlie inked the deal a day before his 50th birthday.

Throughout this time, Zamarripa was putting in the work, so when Cawte decided to move from a digital space to a more traditional print publisher, Charlie was among those first Impspired authors to take that trip with him.

“My kids … they saw me working, they saw me struggling, getting upset and happy at the times that I felt I got it right,” Zamarripa said.

Cawte asked him to submit 30 of his strongest pieces, and it was then that Zamarripa began to see his work through a thematic lens.

While “The Tragedy of Crazy Bear” has been Zamarripa’s “Rime of the Ancient Mariner” and his reason to write since he was 29, only a few parts of the multi-part poem made it into “Lost in Thought” for a reason.

“I purposely left out two parts because I was hoping it would spark some interest so that fans want to know what happens to him,” Zamarripa said.

What’s Next for Charlie Z?

Zamarripa said he’s always dreamed of seeing his name in print, and now that that’s happened, he’d next like to see his work inspire others.

The father of two adult children, ages 26 and 27, as well as two other children in fifth and seventh grade, Zamarripa hopes to get his book in the curriculum for local high schools — that’s the reason “Lost in Thought” has two versions on Amazon, each with different cover art.

He wants to be able to get his book in front of the class of one of his dear friends, a teacher at Central Union High School in El Centro, where he has done readings before.

“We can conquer one school district at a time,” Zamarripa said with a laugh. “I’m not going to change the content; I’ll only change the cover.”

He said he feels inspired when there’s a possibility of local teenagers in the Imperial Valley seeing a local author published and succeeding, and making his voice heard.

Although Zamarripa’s work contains a lot of fictional accounts, Charlie said that poems like “Beautiful and Breathtaking,” from “Lost in Thought,” relay a lot of what it felt like to grow up in a small community in the large shadow of a well-known father and brother.

“I didn’t have my name; I always had to fight for my name. For the longest time I was always Paul’s brother, or Charlie’s son,” he said. “I tried to put that in some of my poems, but hardly any of it is true to my life. I take the story from here to there.”

To that end, Impspired’s Cawte sees and feels Zamarripa’s struggle with identity loud and clear in his writing.

“I think that a lot of people all over the world struggle to define who they are at times. We tend to live in communities with people who are like us, who live in the same way as us,” Cawte explained. “We can see all that is different from our own existence and feel we are bland, dull, or lacking in some way. The truth is, those people living on the tropical islands, or inner city have the same thoughts, and look at the people outside of their ‘normal’ with the same eyes.”

Zamarripa might still be dealing with that feeling of otherness, but he’s found an outlet, and a publisher willing to see him on that journey, even though it seems as if it took forever to get to this point.

For anyone else in the same position he has been in, Zamarripa encourages others not to give up. “Don’t be afraid to submit. Somebody’s got to say yes.”

Now he’s looking forward to even more publications with Impspired, but the next one will be a bit different.

“The next one is going to be music themed,” Zamarripa said.

“(Charlie’s) on a quest to be a really good writer and he’s becoming better and better,” Kofford said. “Poetry is not totally my expertise, but it’s really good, funny, and it’s deep. He’s gifted.” 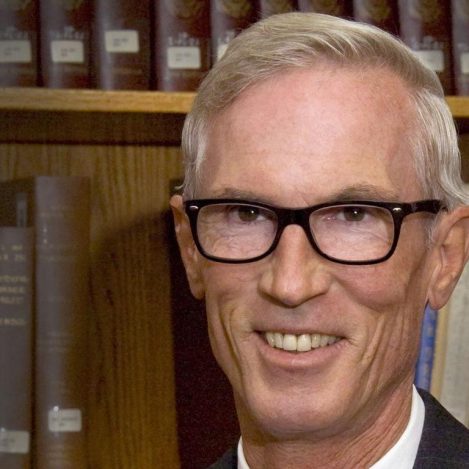