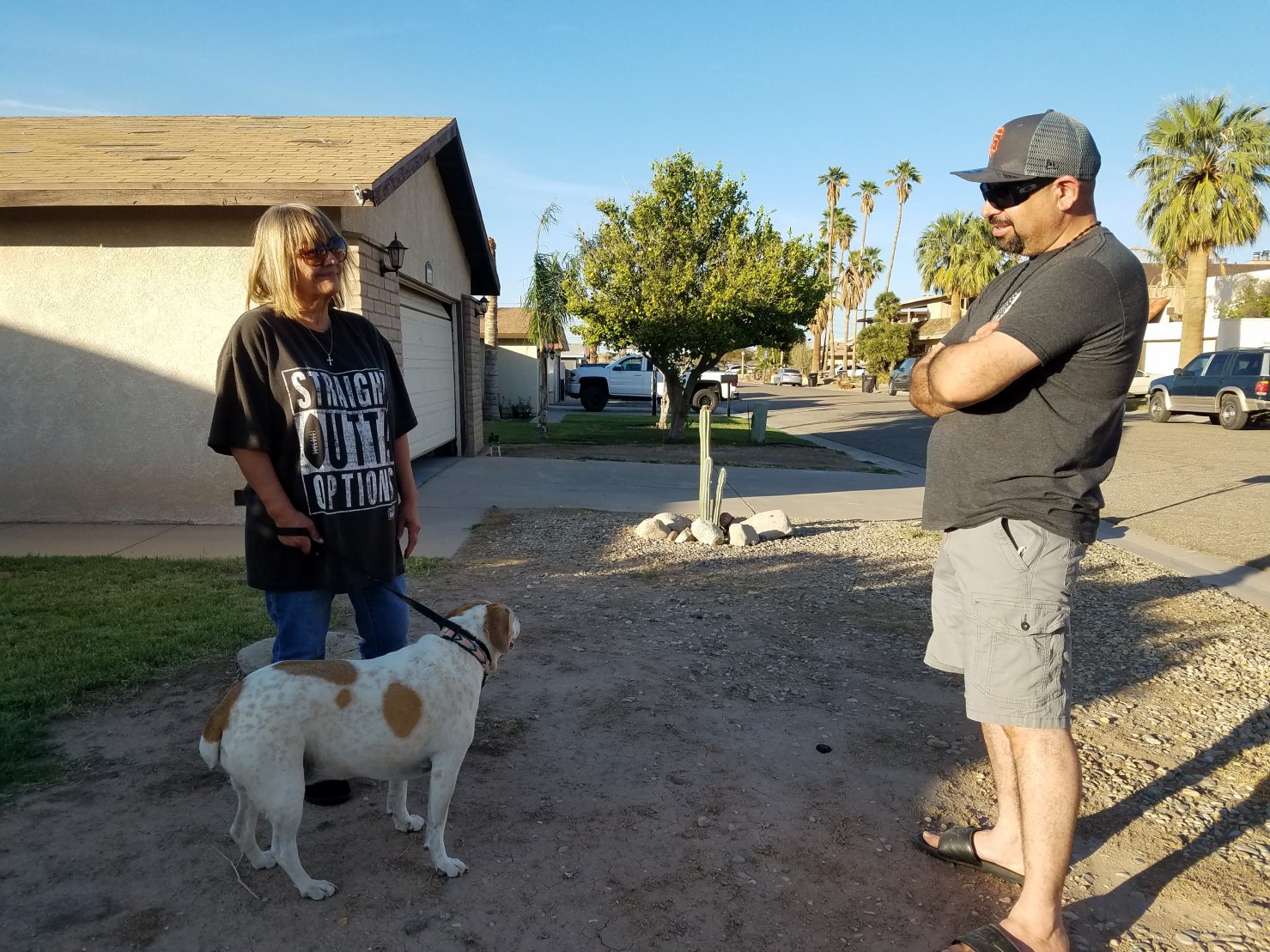 Murray Drive residents Irma Nickell (left) and Luis Garcia on Friday, April 9 shared their thoughts about the housing of migrants at the Ramada by Wyndham Hotel at the nearby Barbara Worth Country Club near Holtville. | JULIO MORALES PHOTO
Home
Regional News
In Regional News

HOLTVILLE — Residents of the homes adjacent to the Barbara Worth Country Club have been consigned lately to swapping concerns and rumors regarding the housing of migrants at the resort’s Ramada by Wyndham Hotel.

The concerns and rumors, some residents have said, stem directly from the unexpected rollout of the state-led initiative and the perceived lack of information that local, state, and federal stakeholders have voluntarily made available.

Since about March 23, the resort’s hotel has been under contract with the state to provide temporary housing for an increasing number of migrants and asylum seekers that are being released in the county from the custody of federal immigration officials.

Since then, nearby residents have struggled to get information about the initiative, said Ralph Strahm, a longtime resident of a home that is located adjacent to the golf resort.

“They probably should’ve had some workshops to explain what was going to happen instead of just doing it without public input,” Strahm said during a phone interview Thursday, April 8.

Strahm’s concerns were enough that he called two of members of the county Board of Supervisors, including Supervisor Ray Castillo, whose district includes the unincorporated land where the resort and nearby residences are located.

Strahm said the supervisors did not disclose any additional information that gave him a better idea of what was happening at the resort or for how long the current initiative would be in place.

“They didn’t tell what me they were going to do,” Strahm said.

Strahm said he was under the impression that the migrants being housed at the hotel were COVID-positive and expressed concerns that their status would contribute to the county’s case rate and slow its progress toward fully reopening businesses.

While the migrants being housed temporarily at the hotel are in isolation or quarantine, the majority have not tested positive for the coronavirus, said Margaret Sauza, executive director of the Sure Helpline Crisis Center, which was providing wraparound services for the migrants at the hotel.

Additionally, a county official said the migrants who are being released from custody into the county and who have tested positive for COVID-19 are not counted among the county’s overall positive cases.

Strahm expressed similar unease about the possibility that the migrants being housed at the hotel may pose a safety risk for nearby residents. Of the half dozen visits he has paid to the resort grounds, he has yet to encounter any security.

And though he has seen some of the adult migrants wearing electronic ankle monitors, Strahm said he has been left wondering whether those housed at the hotel have criminal records that he and his neighbors should be worried about.

“We don’t know any of this,” Strahm said. “We would like to see more transparency.”

A security guard has been hired to patrol the resort grounds at night as part of the housing initiative, resort owner Eddie Mejorado previously stated. The county Sheriff’s Office has also been conducting more frequent patrol checks in response to the situation, sources said.

Another lingering rumor regarding the hotel is that the federal government intends to install additional shelter on the resort grounds in the form of tents or travel trailers.

During the Holtville City Council’s meeting on Monday, April 12, City Manager Nick Wells told the council that he had heard a rumor over the weekend that the federal government is trying to figure out a way to install an unspecified number of travel trailers at the site to accommodate additional migrants.

Wells remarks came in response to Mayor Pro Tem Richard Layton’s concerns about whether the hotel and its large volume of current occupants could potentially have a negative impact on the hotel’s sewer line and the city’s sewer system.

Wells responded that the current situation presents a “problematic” scenario. He further explained that the hotel pays the city for treating its sewer and with the reported high number of occupants, the hotel will likely cross the threshold into a costlier usage rate for sewer. He also explained that the use of travel trailers would require a different kind of sewer connection, if installed.

“They can’t just dump that into our sewer system without first talking to us about it,” Wells told the council. “It has to be a separate connection.”

Since the hotel began housing migrants, resort owner Mejorado has stated that he is not able to disclose any specifics about his contract with the state or potential plans at the venue.

The hotel’s sewage was also one of many listed concerns that appeared on a flyer headlined “CALL TO ACTION” that reportedly was recently distributed among some of the residences nearby the golf resort.

The flyer raised further questions about whether zoning ordinances prohibited the conversion of the hotel for temporary shelter, whether nearby property values would be impacted, whether other sites had been considered, and whether the overall initiative was cost effective.

The anonymous flyer provided the names and phone numbers for elected officials at the local, state, and federal level and asked residents to contact them to demand greater transparency. A hand-painted sign stating “Boycott BWCC,” referring to the Barbara Worth Country Club, was also recently observed in the neighborhood.

In fact, there were a total of four signs affixed to utility poles surrounding the country club late last week, each with a different message, including one asking, “Where’s the Transparency?” and another, “Is this Govt Representing You? Castillo Vargas Garcia.”

Murray Drive residents Irma Nickell and Luis Garcia both said they did not receive the flyer in question, but nonetheless had concerns of their own.

As Nickell stood in the front yard of the home she has rented for the past 11 years speaking with Garcia, her neighbor, both conceded they did not see any immediate solution to the surge of migrants entering through the United States’ Southwest border.

Though Nickell, too, expressed concerns about safety, she acknowledged that she hasn’t noticed any unusual activity around the neighborhood as of late.

The children whose lives have been uprooted and who now find themselves at the Ramada hotel certainly have Nickell’s sympathy. But the costs associated with housing such a large group over an extended period also has Nickell worried about the average taxpayer.

“In other words, we’re paying for it,” Nickell said.

For his part, Garcia said the migrants’ presence didn’t bother him all that much. They are humans simply looking for a better opportunity, he said.

What he did take issue with was how criminal organizations were exploiting the migrants by providing them false information about U.S. immigration policy and downplaying the dangers of crossing the U.S.-Mexico border. Equally troubling, he said, is how the current migrant surge has been politicized to make it seem like the Biden administration is failing to properly address the issue.

“It’s a crisis on the border and they just want to make it worse,” Garcia said.

The scope of the current migrant influx has been the subject of recent tweets by the Twitter accounts of U.S. Customs and Border Protection El Centro and Border Patrol El Centro Sector Chief Gregory Bovino.

On Thursday, April 8, Bovino Twitter’s account reported that sector personnel encountered a group of 92 immigrants from South America within in a 24-hour span.

“Most claimed to be family units when encountered,” Bovino tweeted.

Anyone over the age of 14 that is apprehended by Border Patrol is fingerprinted and their information is run through national databases for any matches. Those who have records entered into national databases, immigration or otherwise, will appear during the records check, said sector Agent and Special Operations Supervisor Miguel Garcia.

Nor does having a criminal record in the United States preclude the Border Patrol from releasing a migrant on their own recognizance with a Notice to Appear in immigration court, Garcia stated in an email Friday, April 9.

“Each apprehension is handled on a case-by-case basis,” Garcia said.

As the elected official who represents Holtville, District 5 Supervisor Ray Castillo acknowledged receiving a “handful” of phone calls from concerned residents about the situation at the Ramada hotel. Some of those concerns seemed to have been overblown and did not reflect what he had observed on site, he said.

“A lot of times, if people don’t have information about what’s going on, people start thinking up their own scenarios,” he said.

Castillo, too, said that he heard the rumor about potential plans to erect tents on the resort’s grounds to house additional immigrants. During one of his several visits to the resort, he asked Mejorado whether the rumors had any merit and was told no.

“I told him that it wouldn’t be suitable for additional housing back there,” Castillo said. “Hopefully, they won’t consider that.”

Since the housing of the migrants is considered an urgent matter, officials at the state and federal level aren’t obligated to notify county officials of their response plans, he said.

And although the county fairgrounds were briefly considered as a possible site to house the migrants, it was determined to have inadequate infrastructure and amenities to house a large number of individuals, especially as the summer heat approached, he said.

Still, the county is maintaining a dialogue with stakeholders and recently assigned its intergovernmental relations director to reach out to involved parties and elected officials to find out more about the evolving situation.

In the meantime, Castillo requested on the county’s behalf that concerned residents keep in mind that county officials are doing their best to respond to the challenging circumstances posed by the migrants being released in the county.

“I would like to ask for their patience to let us work through this crisis, because it is a crisis,” Castillo said.