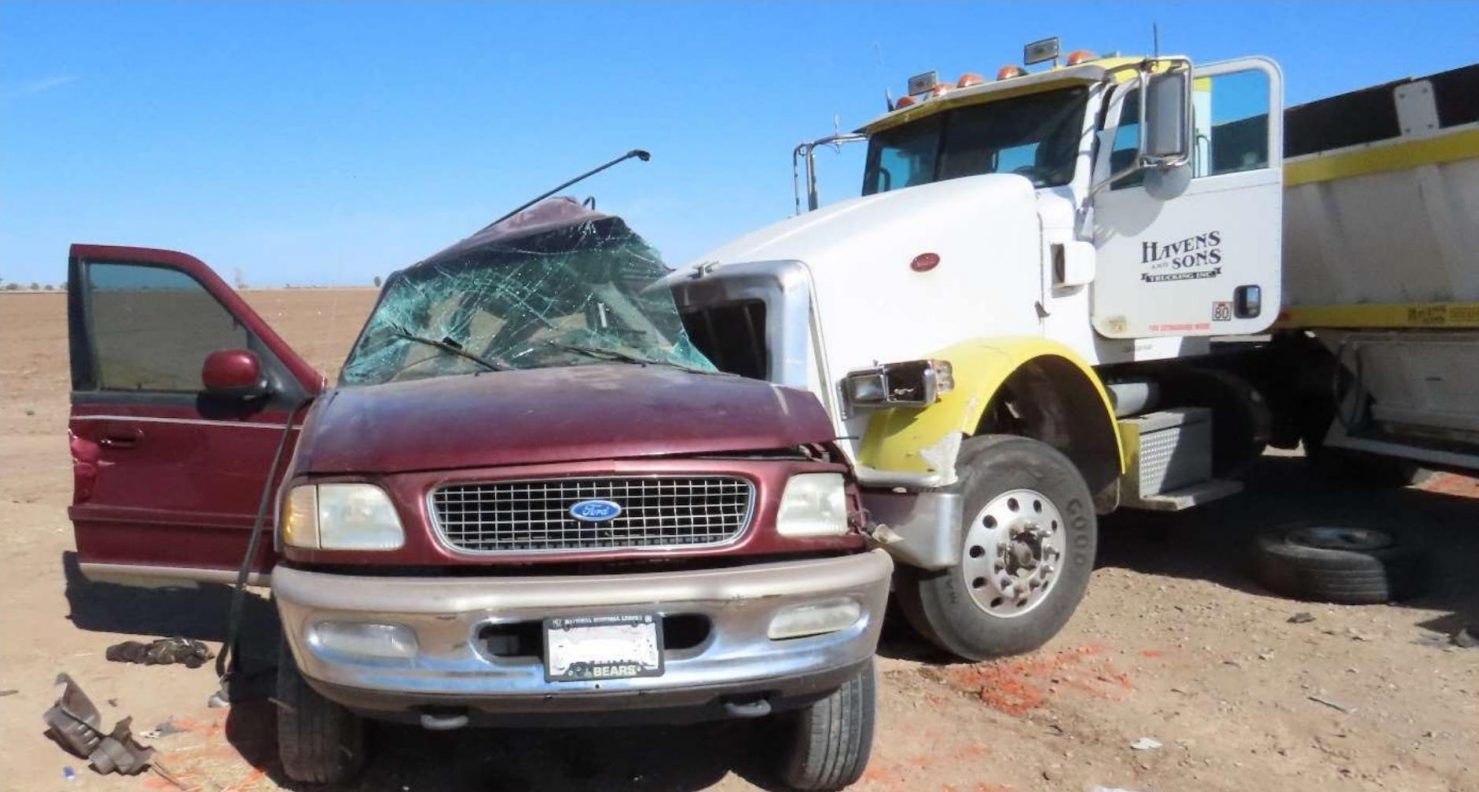 The final resting spot of the 1997 Ford Expedition and the 2011 Peterbilt tractor-trailer rig involved in a fatal collision at Highway 115 and Norrish Road northwest of Holtville that killed 13 and injured 12 is shown. After the semi-truck rammed the sport-utility vehicle on March 2, the vehicles came to rest in the northwest quadrant of the intersection. | CALIFORNIA HIGHWAY PATROL/NATIONAL TRANSPORTATION SAFETY BOARD PHOTO
Home
Public Safety
In Public SafetyRegional News

HOLTVILLE — The driver of a sport-utility vehicle loaded with 24 Mexican and Guatemalan migrants did slow down or stop at a posted stop sign at the intersection of Norrish Road and Highway 115 near Holtville when it was struck by a tractor-trailer rig on March 2, according to a preliminary report from the National Transportation Safety Board.

That was the key new finding regarding the fatal collision that killed 13 people, including the 28-year-old driver from Mexicali, in the NTSB report released on Monday, April 2, on the federal agency’s website.

The California Highway Patrol’s El Centro office and San Diego Border Division-based Multidisciplinary Accident Investigation Team has yet to release any details on exactly how the collision transpired, but first responders at the accident site had told this newspaper it appeared, from the carnage at the scene, that the Ford Expedition ferrying the undocumented immigrants had run the posted stop sign when it was T-boned by a semi-truck.

“According to the truck driver, the SUV stopped or slowed to a near stop at the stop sign, then accelerated onto (State Highway)-115 in front of the combination vehicle (semi-truck). The driver of the combination vehicle applied the brakes and skidded until the front of his vehicle collided with the left side of the SUV,” the NTSB report states, referring to El Centro resident Joe Beltran, the 68-year-old driver for Haven & Sons Trucking Inc.

Beltran suffered moderate injuries in the accident, including several broken ribs. He was airlifted to Desert Regional Medical Center in Palm Springs but released a day or so later.

The full NTSB report can be read here. Most of the information in the report has been previously reported.

Beltran was heading north on Highway 115 and the driver of the SUV, Jairo de Jesus Dueñas Landin, was traveling west on Norrish. There is no posted stop sign on 115, only on Norrish.

The occupants of the Expedition died at the scene, except for one who succumbed after being transported to El Centro Regional Medical Center.

Guatemalan nationals who died in the accident were Magdalena Elizabeth Lopez Escobar, 20, and Yesenia Magali Melendrez Cardona, 23, of Chiquimulilla, Guatemala.

The 12 other passengers in the SUV all sustained some degree of injury and were transported by ground or air to hospitals throughout Imperial, San Diego, and Riverside counties.

The accident itself is still under investigation by multiple agencies, including the NTSB, which stated in the release that it “continues to collect and analyze data about the precrash actions of both vehicle drivers, motor carrier operations, and the configuration of the intersection. All aspects of the crash remain under investigation as the NTSB works alongside the California Highway Patrol (CHP), which is conducting a separate, parallel investigation. In addition to the CHP, the Federal Motor Carrier Safety Administration and Caltrans are parties to the NTSB investigation.”

The human-smuggling activities related to the incident are still under investigation by the Department of Homeland Security and its related agencies.

Mexicali resident Jose Cruz Noguez, age 47, a legal permanent resident of the United States, was charged in federal court by the United States Attorney’s Office on March 30, with coordinating the March 2 human-smuggling event. He was arrested on March 29 as he crossed into the U.S. from Mexico at a Calexico-area Port of Entry.

Cruz appeared for a preliminary hearing in federal court in El Centro on Tuesday morning, April 13, via teleconference before U.S. Magistrate Judge Ruth Bermudez Montenegro, where his attorneys reportedly requested additional time to prepare their defense.

He is also scheduled to be arraigned at 9 a.m. April 27, also in front of Montenegro.