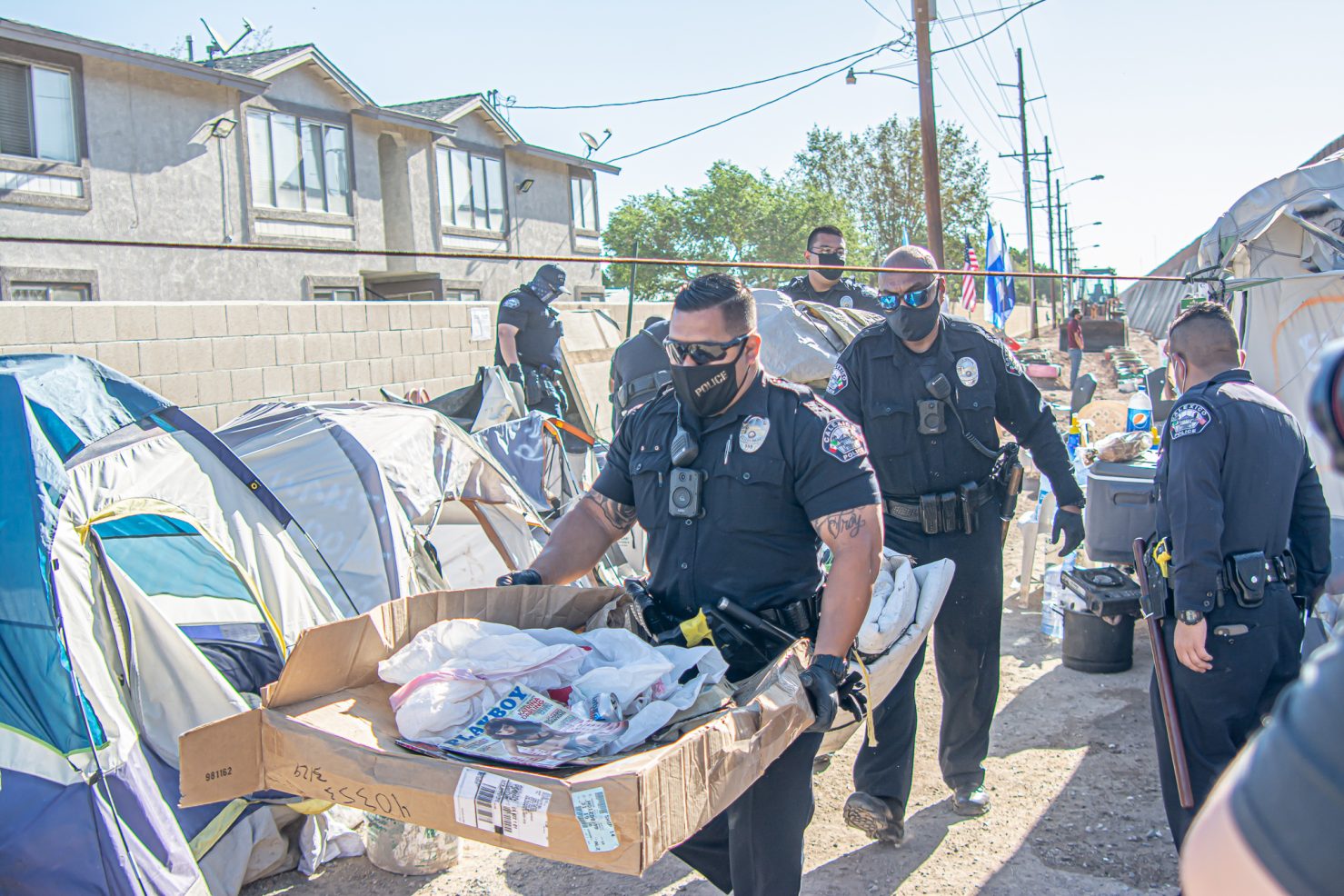 CALEXICO — Despite some pushback by two City Council members and others, the city of Calexico moved forward with the planned removal of a makeshift encampment at the corner of Andrade Avenue and First Street on Wednesday morning, April 7.

The cleanup effort was announced 48 hours in advance and advised the camp’s occupants that any items found onsite were subject to removal and possible destruction if they posed any health or safety risk to the public.

The cleanup effort was also coupled with outreach services for the camp’s occupants. As a result of the outreach effort, two of the three occupants who were present the morning of the cleanup effort agreed to seek housing at the homeless men’s shelter nearby on Andrade Avenue.

Though the camp’s few occupants seemed resigned to the site’s dismantling, Calexico City Council members Gloria Romo and Raul Ureña opposed the action and called for its postponement.

Romo and Ureña unsuccessfully tried to persuade Calexico Police Chief Gonzalo Gerardo to delay the action until the city could determine the precise boundary of the parcels that the city had previously agreed to sell to the federal government to construct a secondary border barrier.

Romo further argued that it wasn’t clear whether the encampment was situated within the 60-foot width of land extending north of the international boundary known as the Roosevelt Reservation, and which grants the federal government its use for immigration enforcement.

She had also indicated that the Calexico City Council should have the ultimate say about whether the encampment should be removed, and that she intended to introduce an agenda item at the council’s regular meeting of April 7 to consider such an action.

The issue would be discussed later that night at the council meeting, although it was not — nor would it be — part of the meeting agenda.

In the meantime, both council members had argued on Wednesday morning that it would be premature and unjust to remove the encampment without first determining whether it was indeed infringing on the federal government’s right of way.

Gerardo listened politely but ultimately decided to go ahead with the camp’s planned removal.

“I think we would’ve been done in an hour if not for the council members trying to stop us from doing it,” the chief said afterward.

After it became clear that the council members’ pleas were not going to prevent the cleanup effort, local farmworker and immigrant rights activist Hugo Castro decided to take a different tact, refusing to voluntarily leave the site.

Castro, who is credited with establishing the encampment in late January, was placed in handcuffs and taken to the police station, where he was cited and released for failing to comply with a police officer’s commands, Gerardo said.

Prior to his arrest, Castro said the Police Department had erred last month when a travel trailer that he had parked at the site was towed by police without properly notifying him.

In response, Gerardo advised Castro that the enforcement action was no different from the towing of any other unregistered and illegally parked vehicle on city property. The response only seemed to further goad Castro.

Heavy equipment was brought in for Wednesday’s cleanup effort, as was Public Works Department personnel, vehicles, and trailers.

The encampment was situated on one of two city parcels that were in the process of being sold to the federal government so that a secondary border barrier could be constructed the parcels.

Though Gerardo conceded that some confusion did surround the boundaries of Roosevelt Reservation and an easement the city awarded the federal government in 1948, city officials had consulted the city’s counsel, who advised them that the camp’s planned removal was legal.

“It’s very confusing but they gave us the go ahead,” he said.

One of the individuals displaced on Wednesday was 56-year-old Antonio Cuevas. The Mexicali resident said he had been residing in a tent at the camp since its creation in January after his temporary work visa expired, preventing him from moving freely between Mexico and the United States.

With the assistance of Spread the Love Charity personnel, who were on hand on Wednesday, Cuevas agreed to seek housing at the nearby men’s shelter that is operated by Catholic Charities. The organization will also help Cuevas resolve his immigration status.

Cuevas was one of two occupants that agreed to relocate to the nearby men’s shelter. A third individual who was residing at the encampment was transported from the scene by Calexico Fire Department personnel for an injured knee, Gerardo said.

Less than half a day after the eviction and cleanup of the site, the Calexico City Council gathered in chambers for its regularly scheduled meeting.

Ureña used his council member report to address the issue in what was a lengthy statement that ran the gamut from social and actual costs of what had transpired that morning, to issues specific to the now-stalled land sale that arguably birthed the encampment in the first place, to a harsh critique of his fellow council members’ politics and lack of innovation.

“This morning I witnessed a pretty expensive crime against humanity on the part of the city of Calexico, where pretty much just about all of our city employees, the whole Police Department, Fire Department, parks, cities and streets, evicted eight people to the heat of the streets,” he said.

Referring to the encampment as a “survival camp for farmworkers,” Ureña said that at the very least the eviction should have been placed on hold due to delineation of the boundaries of the Roosevelt Reservation map being unclear.

IID Works To Be More Prepared for Power Outages

While acknowledging Spread the Love’s presence at the site, he said the charity only secured housing for two of the 10 farmworkers, leaving eight others with nowhere to go.

“We can’t simply rely on the nonprofit sector to solve these structural problems,” he said, adding it was a governmental function to step in and address issues like homelessness.

Ureña said it was the decision of Mayor Rosie Arreola Fernandez, Mayor Pro Tem Javier Moreno, and council member Camilo Garcia to move forward with the eviction. He then went on to call out Moreno and Garcia by name.

Ureña said Garcia made the decision to cast aside a public call not to sell the land by the San Diego State University-Imperial Valley campus students who Ureña said put Garcia in office.

In Spanish, Ureña then said many people have asked him how Moreno can have such racist views when it comes to the border fence and the immigration policies in effect.

He added, still speaking in Spanish, the San Diego-area media have covered the encampment issue and they are laughing at Calexico, although it wasn’t clear who he meant was laughing, the media or those reading the stories.

At one point, in criticizing the lack of innovative ideas from Garcia, Moreno, and Fernandez, he implied now is the time to act on behalf of citizens due to multiple crises, including COVID, meth and opioid addiction, housing, “economic recession with the return of insane oil prices,” climate issues, “we have a drought on top of a dying river and a diminishing water supply, and on top of that we have historic inequality.”

Ureña said he sees other cities in California, including El Centro, make decisions with their COVID relief funding based on principles of social justice, yet Calexico doesn’t know what it wants, he said.

Moreno and Garcia remained silent, but Fernandez used a portion of her board member comments to fire back at Ureña, saying the decision to remove the tents and people from the site were the “government’s doing.”

“The people that were there, they were not all farmworkers and you know it,” Fernandez told Ureña.

She added neighbors in the area were unhappy and complained, that “they broke into people’s homes,” stole electricity from nearby apartments.

“You were cooking fried chicken in the tents. What safety is that?” Fernandez asked.

At the end of the meeting, Romo asked that eviction of farmworkers be placed on the next council meeting. Although she never said what the specific issue was to be discussed, Ureña spoke up and said that he believed she wanted clarity on the Roosevelt Reservation issue and the 1948 deed of trust over the land parcel. 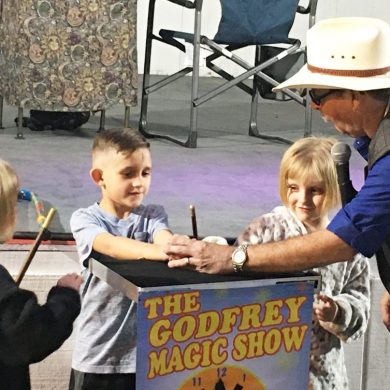