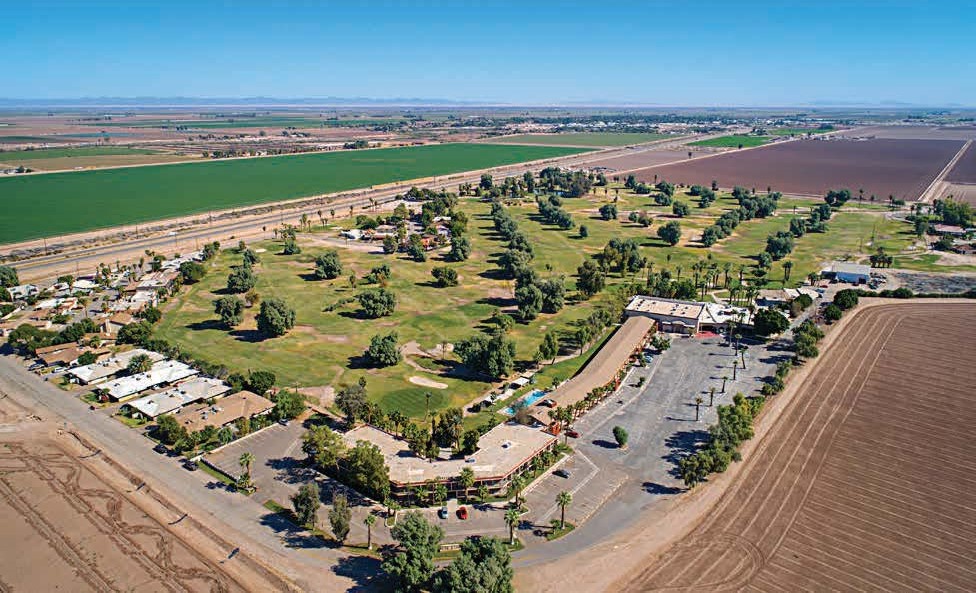 An aerial overview of the Barbara Worth Country Club is shown in this image found on a real estate website. The California Department of Social Services has contracted with the resort's Ramada by Wyndham Hotel to house an undetermined amount of asylum seekers in its rooms, it was revealed on Thursday, April 1. | COURTESY PHOTO
Home
Public Safety
In Public SafetyRegional News

HOLTVILLE — An undetermined number of asylum seekers that have been released from the custody of federal immigration officials are being temporarily housed in the hotel at the Barbara Worth Country Club.

The local housing of asylum seekers has resulted from an increase in the number of migrants being apprehended at the border by U.S. Border Patrol, as well as the inability of the Immigration and Customs Enforcement to detain subjects, a local Border Patrol official said.

Resort owner Eddie Mejorado said the arrangement with the state happened quickly without any advance notice and was facilitated by similar arrangements between state officials and Wyndham Hotels & Resorts, which operates the Ramada hotel at the resort.

Though he said he was not at liberty to discuss details of the arrangement, he did state that about 30 rooms are being occupied by individuals from Syria, Brazil, and Russia, to name just a few.

“It’s a mixture of teenagers and little kids going through the courts,” Mejorado said. “They’re a bunch of good kids.”

He could not say for certain whether more asylum seekers will continue to arrive or whether the resort will need to establish additional temporary housing, such as tents, to accommodate them.

Security has been hired to monitor the grounds around the clock, as has an additional crew to perform cleaning duties.

County Supervisor Ray Castillo, whose district includes Holtville, said he was unaware of the housing of asylum seekers at Barbara Worth until the Wednesday morning, March 31, when a resident of the resort contacted him to express concerns about the situation.

“I was kind of caught by surprise,” Castillo said on Thursday, April 1.

The revelation prompted him to visit the country club, where he spoke with Mejorado.

Castillo said Mejorado reportedly told him that the resort was contacted by state officials who requested the use of the facility’s hotel to temporarily house asylum seekers who are in the process of reuniting with family or sponsors elsewhere in the country.

“The folks that are coming here are strictly in transit and are going to have a high turnover,” Castillo said.

Castillo said he was unaware of how long the overall initiative may be in place but was in the process of seeking answers.

“Are we talking about weeks, months?” Castillo said. “Those are the questions I have, and I’d like to get an answer to.”

When contacted on Thursday evening, Mejorado, too, said he was not certain how long the initiative might be in operation.

One resident of the resort, who asked to remain anonymous, said they were caught off guard by the situation, and felt disappointed that nearby residents were not notified.

The resident said that unverified reports have suggested that up to 500 individuals may be housed at the hotel. Trying to get answers from public officials has also proven fruitless, the resident said.

“I feel like this isn’t an issue to ignore,” the resident, who has lived at the resort for the past two years, said. “We don’t know who these people are.”

Mejorado brushed aside such concerns.

“They are not here to harm anybody,” he said. “Instead of being worried about who’s there and where they’re from, we should take toys to the kids.”

The local housing of migrants appears to stem from a recent change in policy that prohibits federal immigration officials from transporting subjects beyond a five-mile radius, said Gilbert Rebollar, who is a member of the County Executive Office’s Joint Information Center.

“Whether this change in policy was due to COVID-19 or the federal government’s administration, the county is committed in providing humanitarian support for our local agencies and (non-governmental organizations) aiding those unable to shelter or quarantine during this time,” according to Rebollar in a written statement Thursday.

Aside from the asylum seekers that are being housed at the resort’s hotel, an increasing number of them are being transported outside of the county to the Galilee Center in Mecca, which provides services for the less fortunate.

In the past, the Border Patrol would often transport asylum seekers directly to the Galilee Center for temporary housing, said Claudia Castorena, the center’s co-founder and chief financial officer.

Since the federal government’s March 1 change in immigrant transportation policy, shelter personnel have been traveling to the county Mondays through Fridays to pick up individuals released from Border Patrol custody, Castorena said.

The shelter has a capacity of about 70 people. Lately, migrants released in the Imperial County and transported to the shelter have accounted for about 50 to 70 percent of those housed there, she said.

Typically, the Border Patrol will provide the shelter advance notice of the number of asylum seekers it is processing.

“They’re doing what they can and they’re pretty good about communicating with us,” Castorena said. “They send us basic information ahead of time.”

The shelter is only accepting individuals who have tested negative for COVID-19. Those who test positive are referred by the shelter to county Public Health, which then will place the migrants at the Quarantine and Isolation Shelter (QIS) that has been established at Imperial Valley College.

On Thursday, there was 32 individuals sheltering at the QIS, with none being minors, Rebollar said.

“At this time, the county continues in our effort to maintain daily communications with federal authorities on information and notification of individuals and family units released within Imperial County,” Rebollar stated.

This comes as the El Centro Sector of the Border Patrol reported on its Facebook page on Wednesday evening that the Calexico station had set a single-day record for the largest group apprehension in the history of the sector at 64 undocumented immigrants.

Over the past 24 hours at the time of the post, the sector reported 208 immigrants detained, “a new 10-year high for our Sector,” according to the Border Patrol.

When contacted about the apprehensions on Thursday morning, an El Centro Sector spokesperson stated no further information would be released at that time.

All Imperial County Granted ‘Variance,’ Can Re-Open at 5 p.m. Aug. 25 with Modifications