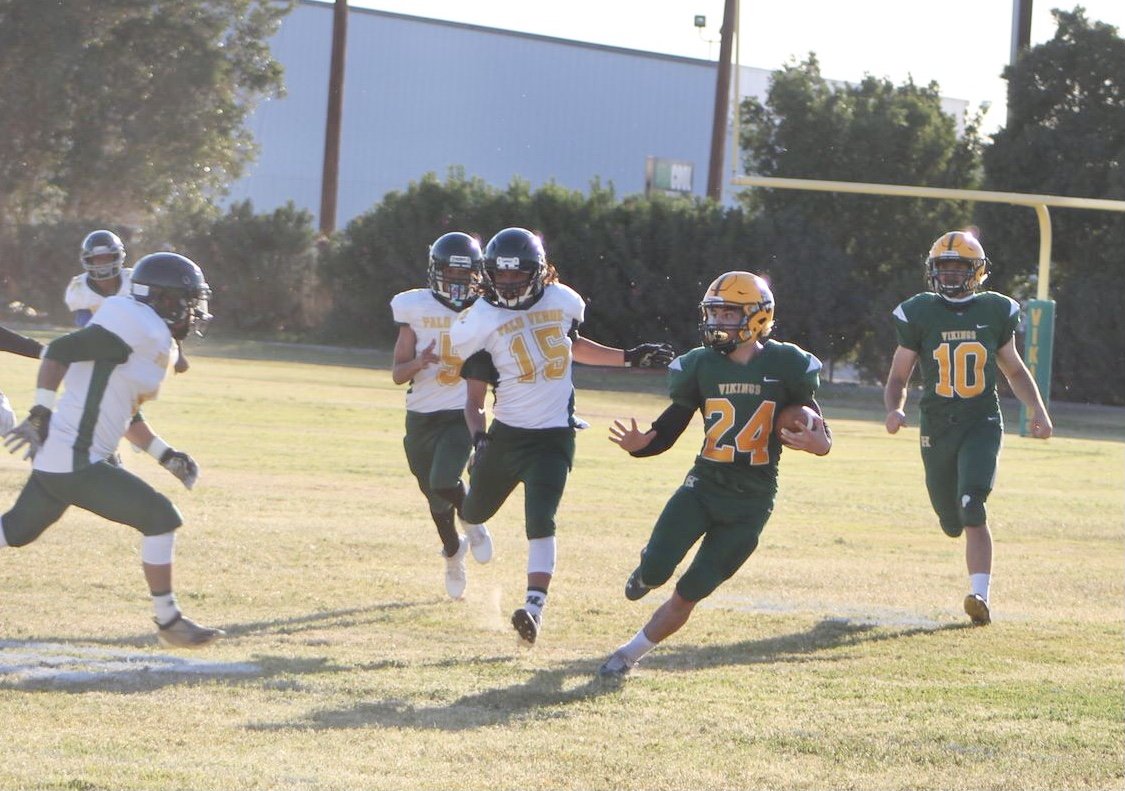 HOLTVILLE — Scoring twice late in the first half and once in each of the last two quarters, the Holtville High School football team dominated the Palo Verde High of Blythe Yellowjackets for a convincing 27-6 Desert League win on Senior Night at Birger Field on Saturday, March 27.

Holtville senior students participating in football, band and cheer were introduced along with their parents at halftime with Saturday’s game being the last home football game during this COVID-shortened season.

On the field, it was the Holtville (1-2 overall, 1-0 in DL action) underclassmen who showed their stuff. Senior running backs Jose Devoux and Abraham Ramos did not play most of the game as they are still recovering from injuries suffered two weeks ago in the Vikings’ opener.

“I’m just happy we had the opportunity to have a Senior Night and recognize these kids who’ve had so much taken away from them this year,” said Jason Turner, Holtville’s head coach. “On the field it was good to see what some of these other players are capable of when given the opportunity.”

The Vikings controlled the ball for most of the first half with Palo Verde (0-1 overall and in DL play) players getting their first opportunity on offense with just four minutes left in the first quarter after the home team’s initial drive stalled at the Yellowjackets’ 5-yard line.

Palo Verde went three-and-out before punting it back to the Vikings who started to methodically move the ball from their own 22-yard line. The Vikings again failed to score as a pass fell incomplete at the visiting team’s 15-yard line with 5:43 left in the first half.

Once again, it was three plays and a punt for the Palo Verde team as it failed to move the ball. The Vikings got the ball back at their 35-yard line with four minutes left in the first half.

Four plays later the Vikings would get their first score. After an incomplete pass on first down, junior running back Payton Iten carried the ball to Palo Verde’s 42. On the next play, sophomore quarterback Damian Rodriguez broke free on a scramble all the way to the opponent’s 7-yard line.

Iten carried the ball across the goal line from there. Fermin Velarde kicked the extra point, and the home team was up, 7-0, with 2:31 left in the half.

“Our line did a good job tonight opening up the running lanes and I was just trying to follow their lead,” said the 16-year-old Iten. “With the seniors still injured, I was happy to just get an opportunity and try to make the most of it.”

The Vikings attempted an onside kick which Palo Verde’s Xavier Gonzales-Pinon alertly fell on. Consequently, the Yellowjackets had their best field position of the game at that juncture and managed to get their initial first down of the game as they penetrated to the Vikings’ 45-yard line.

However, three plays later Viking cornerback Isidro Garcia intercepted a Yellowjacket pass and sprinted 60 yards down the sideline for a touchdown as time expired in the first half. The extra-point attempt was wide left and the Vikings took a 13-0 lead into halftime.

After receiving the second-half kickoff, Palo Verde managed to move the ball down to the Vikings’ 30-yard line before being stopped on a solid tackle by senior Nicholas Villegas on a fourth-and-3 play with seven minutes left in the third quarter.

Strong running by senior Carlos Nuñez and Iten took the ball to the Yellowjackets’ 39-yard line. A Rodriguez-to-Roger Rolfe pass completion set the Vikings up at the Palo Verde 2-yard-line where senior Ryder Merten was able to bull his way into the end zone. The same play worked for the two-point conversion as Merten again found pay dirt, and the Vikings’ were up 21-0 with 4:40 to go in the third quarter.

Iten found the end zone again with 5:55 left in the game and Velarde’s extra point made it 27-0.

Palo Verde finally got on the scoreboard with 1:41 left in the game when sophomore Xavier Bejarano bolted in from two yards out.

Holtville travels to take on Desert League foe Vincent Memorial Catholic of Calexico at 7 p.m. Thursday, April 1, with the game being played at Cal Jones Field on the Central Union High campus in El Centro.