CALEXICO — One key mistake led to one big play and turned a tight contest into a victory for the Calexico High School football team on Friday, March 26, when the Bulldogs beat Southwest High of El Centro, 19-12, at Ward Field here.

Trailing 13-6 with five minutes left in the game, Southwest had just forced Calexico to punt and took over possession at its own 38-yard-line. On the first play of the drive, momentum turned, and the game was decided.

Eagles’ freshman quarterback Logan Jungers locked his eyes onto his receiver a little too long and was intercepted by Calexico junior linebacker Frankie Arreola, who returned it 41 yards for a Bulldogs touchdown and a 19-6 lead.

“I just dropped back into my zone and saw the quarterback’s eyes and was just hoping he’d throw it over the middle,” said the 17-year-old Arreola. “I had to make sure I caught it and then when I did, I just saw green, and it was a race to the end zone.”

The win evens Calexico’s overall and Imperial Valley League record at 1-1 on the COVID-shortened season and leaves Southwest at 0-3, including 0-2 in IVL action.

While the Bulldogs’ offense struggled, mounting only 31 yards passing and 132 yards rushing, the Calexico defense shut down Southwest’s running game, limiting it to negative-9 yards rushing. Jungers did go 11-for-23 in the air for 149 yards, but tossed two interceptions, along with two touchdowns.

“Our main focus all week was stopping the run and forcing them to try and beat us with the pass,” said first-year Calexico head coach Fernando Solano. “If he was able to beat us with his arm, then so be it, but we were going to keep our focus on the run.”

The Bulldogs’ first score of the game came with 3:32 to play in the first quarter when they were able to take advantage of excellent field position. A bad snap on a Southwest punt attempt gave Calexico the ball at the Eagles’ 17-yard-line.

It took the Bulldogs seven plays to reach the end zone, getting the final three yards from junior running back Julian DeLeon, who finished the night with 12 carries for 55 yards and the touchdown. Lorenzo Rodriguez booted the extra point to put Calexico ahead 7-0.

“We came out pumped up and ready to play,” said the 17-year-old DeLeon. “We watched film and ran their scout team offense all week, so we were hyped up for this game.”

The Bulldogs extended their lead to 13-0 in the second quarter after a nine-play, 52-yard drive ended with a 16-yard touchdown pass from sophomore quarterback David Esquer to freshman receiver Andrew Rivera. While Esquer didn’t throw the ball much, he did complete 6-of-7 passes for just 31 yards and the touchdown.

Southwest would answer late in the first half, scoring with 20 seconds left when Jungers hit Nate Smith for a 10-yard touchdown strike. The Eagles missed the point-after but had pulled within 13-6 at the half.

Smith was the top receiver in the game, catching six passes for 85 yards and two touchdowns. His second score came with 1:45 left in the game when he caught a 16-yard pass from Jungers to get the Eagles within 19-12.

Southwest’s attempt at the ensuing onside kick was recovered by the Bulldogs’ Rivera and Calexico was able to run out the clock and preserve the victory.

“We’ve really focused on what we need to do to get better as a team,” Solano said after getting his inaugural victory with the Bulldogs. “We’ve kept drilling the fundamentals into them and we are holding them accountable.”

Calexico will next host Brawley at 7 p.m. Thursday, April 1, while Southwest hosts Palo Verde of Blythe in El Centro, also at 7 p.m. April 1. 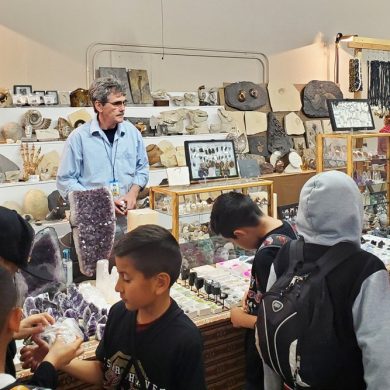