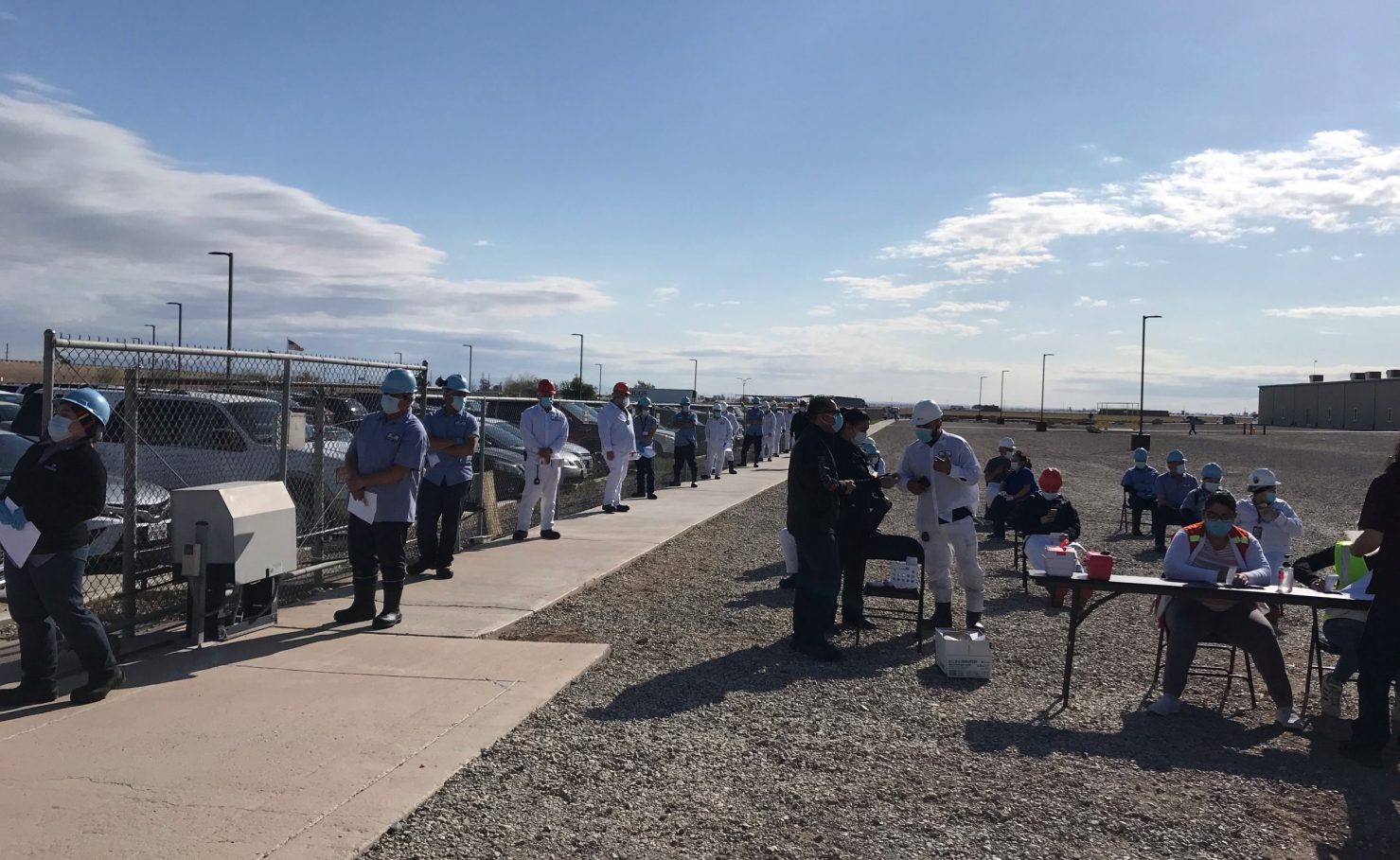 Employees at the One World Beef processing facility in Brawley, who are part of the farmworker and food industry sector, took part in a COVID-19 vaccination clinic held through Pioneers Memorial Healthcare District in conjunction with Salud Sin Fronteras on Friday, March 26. | PHOTO PROVIDED BY LUIS OLMEDO
Home
COVID-19
In COVID-19Featured StoriesRegional News

As Imperial County’s COVID numbers get smaller, the good news is arguably getting bigger … and better … as vaccine allocations and those eligible to receive them rapidly increase.

What’s more, by Tuesday midday, March 30, if the present direction of data hold course, the Imperial Valley is expected to be in the Orange Tier, or “moderate,” according to county Public Health Department officials.

The move from the current Red Tier to Orange, where only nine California counties and just over 10 percent of the state’s population resides, could bring with it significant social and economic changes, chief among them, removing percentage capacity caps off most retail businesses for the first time in a year and increasing indoor capacity from 25 percent to 50 percent for churches, restaurants, and movie theaters.

Meanwhile, California has made big moves in the last week-plus to dramatically increase vaccine allocations for underserved communities, with Imperial County receiving between 16,000 and 17,000 doses over a period of three days this week, March 22-25, to inoculate farmworkers, seniors, and higher-risk groups, according to county Public Health officials.

“It’s extremely important to share … all the collaboration, all the effort occurring, not just with the county of Imperial but all our partnering agencies, to make a true difference here in Imperial County,” said Tony Rouhotas Jr., county executive officer, on Thursday, March 25.

“With the increase in vaccines, which is something we were advocating for for several weeks and now it’s coming to fruition, it’s great to see our community getting vaccinated on the verge of changing tiers again,” Rouhotas said during the county’s joint press conference on COVID.

Over the last several days, vaccination events have occurred for multiple populations, from farm laborers and food workers, to educators, seniors 65 and older, and other eligible groups, up and down the Imperial Valley in numbers almost too many to track.

It remains to be seen whether that pace can be sustained, but it will need to, if the increased demand is to be met when the floodgates open in April on who will next become eligible to be vaccinated.

Gov. Gavin Newsom announced late in the week that on April 1, all Californians age 50 and older will be eligible to receive the vaccine, and on April 15, everyone 16 and older who is “medically eligible,” meaning if they meet the minimum age requirement of each brand of vaccine in circulation (16 years old for Pfizer-BioNTech; 18 for Moderna and Janssen/Johnson & Johnson), they can receive it no matter their health conditions.

Imperial County has some catching up to do considering that the recent surge in vaccine shipments has everything to do with how far behind the region was — and still is, to some degree — on getting enough doses to one of the poorest, sickest, most impacted counties (and zip codes, therein) in California, at least according to the state’s Healthy Places Index, an equity-based measure that factors in healthcare access, socioeconomics, and environmental conditions, among other metrics.

“The reason for the larger number is twofold: No. 1 is that more vaccine has been available, and No. 2 is when the state went to using the Healthy Places Index, to really try to get (those California zip codes in the bottom 25 percent) to that first quartile (top 25 percent), and basically move twice as many vaccines into that quartile than to the other quartiles,” Imperial County Health Officer, Dr. Stephen Munday said. “Obviously, that had a major positive impact on vaccine coming to Imperial County because we have a large number of people that fall into that (bottom) quartile.”

Prior to the Healthy Places Index-based allocation, which was announced March 4, some 40 percent of all COVID cases and deaths in California occurred in the bottom quartile of the state’s zip codes (which includes 400-plus communities), of which more than a dozen of those are in Imperial County. As a result, Governor Newsom stated that 40 percent of all vaccine allocations would be pushed out to those areas.

Imperial County Public Health Director Janette Angulo explained on Thursday that this past week, the health department received more than 14,000 doses (9,000 first doses and more than 5,000 second doses) and that Pioneers Memorial Healthcare District and Dr. Tien Vo’s health clinics received a total of around 3,000 between them directly from the state.

The health department was expecting another 9,000 first doses next week, with an as-yet undetermined number of second doses, Angulo said Thursday.

Stats for Seniors and Farmworkers

Seniors 65 and older, and more recently, farmworkers and those working in the food sector, are still the present focus.

Just under 40 percent of California’s 6 million eligible seniors had received at least one dose of the vaccine as of March 25, but in Imperial County, concentrated efforts seem to be putting the Valley’s most vulnerable population ahead of the curve.

“When it comes to our senior population, we’ve reached quite a bit,” she added. “We still have a little bit to go, and we will continue to outreach to our elderly.”

That 22,000-plus segment of seniors who have at least one dose represents more than 84 percent of the estimated 26,000 seniors over age 65 living in Imperial County. Some 14,400, or 55 percent, are considered partially vaccinated and 7,500 seniors, or 28 percent, are fully vaccinated, Angulo added.

The farmworker population is arguably where the fastest advancement has occurred, considering the first group of 20 field laborers did not get doses until Feb. 22.

This past week was a full-court press to get farmworkers inoculated, with major vaccination events in downtown Calexico, at One World Beef, various packing sheds, and at Pioneers Memorial Healthcare District offices in Brawley and through Pioneers mobile clinics, and there was yet another mass drive-through clinic at Imperial Valley College.

That direct allocation of 3,000 doses to Dr. Vo and Pioneers that Angulo referenced, all of which she said were single-dose Johnson & Johnson vaccines, were earmarked specifically for ag workers and came directly through the governor’s office in a collaborative partnership with the Newsom administration, Assembly member Eduardo Garcia, D-Coachella, and Salud Sin Fronteras, according to Luis Olmedo, executive director of Comite Civico Del Valle.

“Salud Sin Fronteras is a grassroots concerted effort born in response to the pandemic and has now become a trusted name among farmworker populations, allowing us to register thousands of farmworkers to access vaccines,” said Olmedo on Friday. Olmedo is a founding member of Salud Sin Fronteras, a coalition of social justice organizations focused on improving health conditions for COVID-impacted ag laborers.

“We have great partnerships with Salud Sin Fronteras, PMHD, Dr. Vo and Desert Pharmacy,” Olmedo said. “The ag sector is being really helpful, and One World Beef, they were very well organized and had dedicated COVID safety experts on staff.

Some 1,200 field workers were reportedly vaccinated in the Calexico area alone in the past 36 hours, according to a Friday night Facebook post from Eric Reyes of Brawley, a member of Salud Sin Fronteras and a veteran in the local social justice movement.

Photos were shared among various people Friday showing hundreds congregating near Donut Avenue on Third Street in downtown Calexico overnight in yet another pop-up clinic from Dr. Vo.

In the north end of the county, Pioneers’ mobile units administered some 900 doses of vaccine in a 27-hour period at such locales as One World Beef, Sahara Packing Co., and in the Salton Sea area, according to PMHD administrator and District 4 Supervisor Ryan Kelley.

In the central area of the Valley, mass vaccination clinics at IVC staged by county Public Health and its partners have accounted for some 2,000 total doses administered to farmworkers, and another 2,300 through Public Health mobile clinics to reach laborers at their places of business in areas such as Bard, Winterhaven, Heber, and Holtville, according to Angulo’s report.

Angulo could not say how many total farmworkers have been partially or fully vaccinated as Thursday afternoon, and on Friday, Public Health staff stated 2,000 to 3,000 more were to receive doses through next week.

It’s unclear how many total farmworkers are in Imperial County, as estimates have been 12,000 to 13,000 on the high end. There seems to be a minimum of around 10,000 working in ag-related jobs, according to the more comprehensive Imperial County Crop Report Plus, produced in 2017.

Orange is the New Red

While nearly all Southern California is now awash in Red, Imperial County was the first to reach that marker in the collective region on March 10, with neighboring counties following suit a week later.

Once again, Imperial stands to be the first SoCal County to reach Orange as soon as next week. The state updates its metrics every Tuesday, with a new designation to take effect the following day.

“For Imperial County, I’m sure you guys are aware, since the numbers came out on Tuesday, our numbers continue to look better. Those numbers are numbers that are actually in the Orange Tier,” Dr. Munday said on March 25. “But it isn’t enough just to meet those numbers.”

Imperial County for the week of March 22-26 had a seven-day average positivity rate of 1.9 percent (Orange requires 2 percent to 4.9 percent), a 3.6 percent health equity rate (Orange requires less than 5.3 percent), and three cases of COVID per 100,000 residents (Orange ranges from one case to 3.9).

Munday said those metrics must hold steady or decline for two consecutive weeks to move up a tier. What’s more, Imperial County would go to Orange first again, because a county cannot advance tiers for at least three weeks after entering a new tier. Tuesday, March 30, would be three weeks.

There were 77 active COVID cases in Imperial County as of Friday morning. The raw numbers for the day were 4.85 cases per 100,000 residents and a positivity rate of 9.37 percent, both of which include the state prisons but are adjusted by the state on Tuesdays.

Deaths, the lagging indicator of COVID in a community due to the varying length of time it takes to investigate and verify that each case is a COVID-related death, was at 712 on Friday.

If Imperial County makes it to Orange next week, Munday said, “of course that would mean additional things get to open up.”

“So, we’re super excited about that, it’s fantastic news for the community, and it just shows the really hard work that everyone’s been doing,” he added.

Some of the more specific advancements that come with the new designation (besides those mentioned earlier) include:

All the good news does come with caveats, Dr. Munday said.

Some statistical models do “predict an uptick” in cases, he said, with the continued presence of the variants of the SARS-CoV-2 virus, including the more severe Brazilian variant that has been found in both San Diego County and Yuma. Munday also referenced the upcoming holidays, and the fact that only 15 percent of the nationwide population is fully vaccinated.

“It is now spring break and Easter season, and as we have seen with every holiday since the beginning of this pandemic, surges do occur over the holidays because, of course, people want to be with their loved ones,” Munday said.

“I would ask that everyone please, please, please continue to follow the public health guidelines of masking and distancing, even if you’re vaccinated,” said Munday, adding that vaccinated means two doses of Pfizer or Moderna and one dose of Johnson & Johnson, and that 14 days have passed since that vaccination. 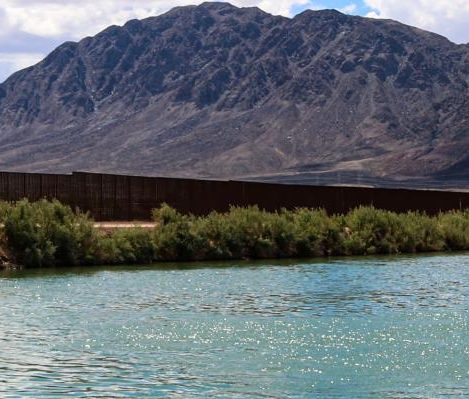