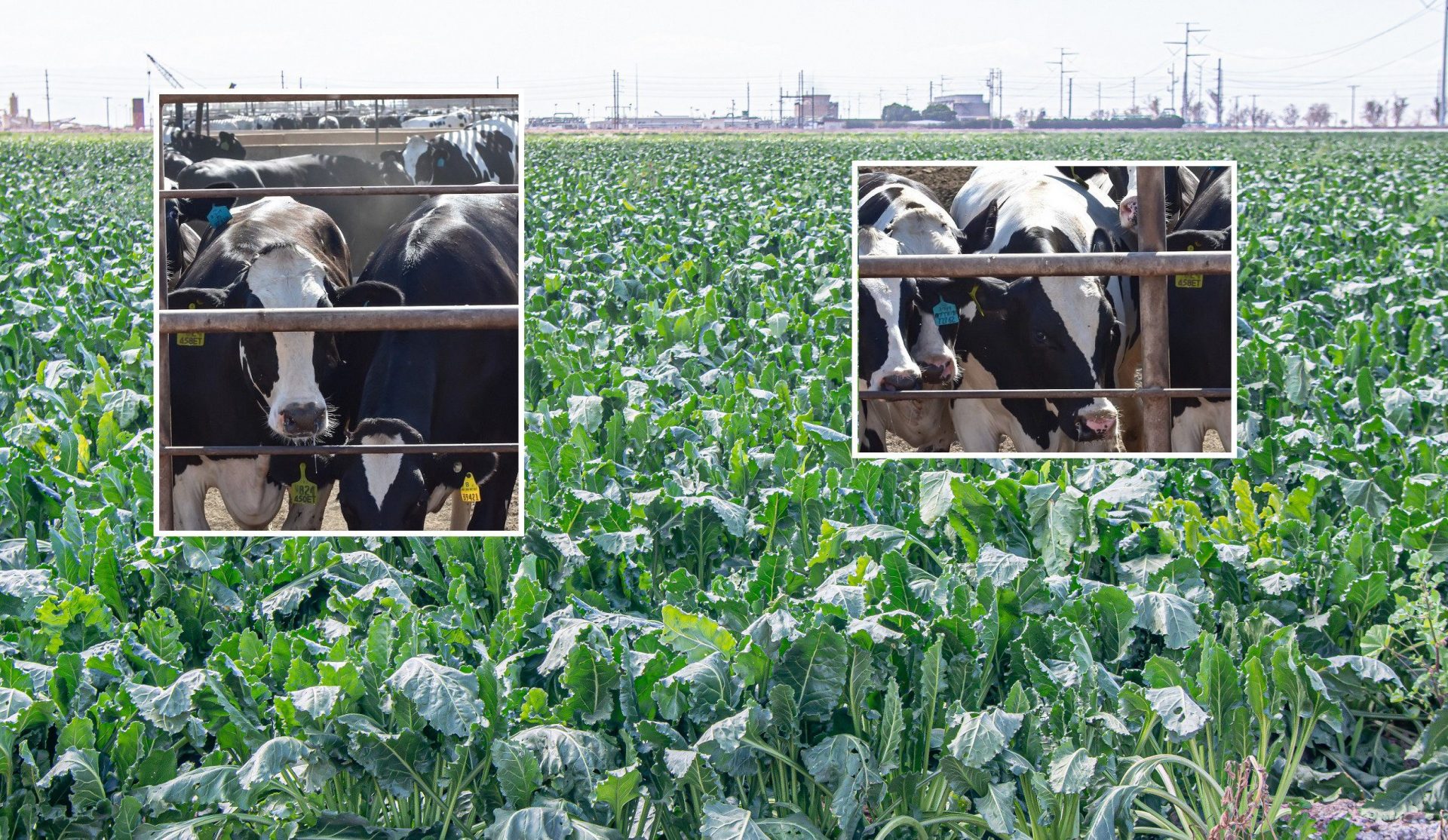 A leafy green field south of Heber stands adjacent to a cattle feedlot (inset photos from same feed yard) illustrating the issue of attempting to provide a buffer between such fields and cattle to eliminate the possibility of the kind of E. coli contamination that happened in the Yuma area in 2018. | CAMILO GARCIA JR. AND FILE PHOTOS
Home
Agriculture
Share

A massive E. coli outbreak in romaine lettuce in 2018 linked to five deaths and more than 200 illnesses has had a ripple effect on Imperial Valley growers and feedlots that is still being felt today.

Although an E. coli outbreak has never occurred in Imperial County, local farmers have been among those in the agriculture industry who took on a self-regulating role to appease buyers and prevent such future outbreaks, the likes of which crippled an industry for a year.

In the absence of hard data after the 2018 outbreak, there was the belief that feedlots in proximity to leafy green plots were the cause. The bacteria E. coli is commonly found in the intestines and feces of cattle and other animals.

“Are feed yards a problem in contaminating vegetables with E. coli?” Scott Howington, a Holtville farmer and president of the Imperial Valley Vegetable Growers Association, asked rhetorically. “How is it being transmitted? How do we mitigate that? Right now, it’s hit-and-miss. Nobody even knows if the feed yard is even a problem.”

Regardless, food safety rules were tightened. Buffers were expanded between feedlots and the fields, making planning more difficult and potentially limiting vegetable production, some growers say.

To this day, the actual source of the outbreak, E. coli O157:H7, has never been identified. But no one in Imperial County wants a repeat of 2018, when for several months, any leafy greens anywhere were verboten per public opinion.

To that end, any hit to the local leafy green stock would be costly — the combined value of spinach, leaf, head, and romaine lettuce grown in the Imperial Valley was nearly $300 million in 2019 — so local growers are looking at their neighbors to the east on what not to do.

Valley growers and those speaking out on their behalf openly question whether the proactive measures implemented thus far could do more harm than help. Some buyers now require buffers even wider than those that growers adopted following the outbreak.

That hit-and-miss approach is complicating matters for Valley growers, who worry that those increased buffers for buyers will render vast tracts of land unusable for fruit and vegetable production, even though there was no proof that the Yuma outbreak was caused by a feedlot.

“The amount of farm ground that you lose — thousands upon thousands of acres are out,” said Jack Vessey, a Holtville farmer who grows a variety of vegetables such as spinach, iceberg and romaine lettuce, cabbage and broccoli on about 5,000 acres.

“If you’re going grow for those (buyers), you have to take those requirements into account,” Vessey added. “We sometimes have to move fields around to meet their requirements.”

The Yuma outbreak effectively brought the romaine industry to a standstill. Media reports advised consumers to avoid romaine lettuce from Yuma. It also spurred growers and packers to reevaluate their food-handling safety protocols once again.

The effort was reminiscent of an event 12 years earlier, when an E. coli outbreak in spinach infected nearly 200 people, led to kidney failure in 31 people, and the deaths of three people.

Reports issued by the U.S. Centers for Disease Control and Prevention, the California Department of Public Health, and the U.S. Food and Drug Administration indicated that the probable source of the outbreak was a cattle ranch that had leased land to a spinach grower.

The publication of those reports in 2006 forced growers and packers to start the Leafy Greens Marketing Agreement, a voluntary program for food safety that set standards for growers and packers. The 2016 Food Safety Modernization Act used many of the leafy green standards to establish federal standards.

In April 2019, the California Leafy Greens Marketing Agreement announced more stringent food-safety practices required on member farms. The new standards forbade the use of untreated surface water for overhead irrigation of leafy greens prior to harvest, and to sanitize irrigation water if necessary.

There were other changes.

Illnesses caused by the Yuma County-based outbreak strain started to appear on March 13, 2018, according to the FDA. Yuma’s romaine harvest was well underway.

Interviews with the ill helped public health officials to identify chopped romaine from the Yuma growing region as the likely source of contamination one month later, on April 13. The traceback investigation commenced.

The last shipments of romaine lettuce from Yuma were harvested three days later, on April 16, bringing the harvest to an end. This meant that contaminated lettuce that made people sick would no longer be available.

Three days after the end of the harvest, on April 19, Alaskan health officials announced that eight people from a correctional facility there were confirmed as part of the outbreak. They had eaten romaine lettuce that was eventually traced back to a single farm in Yuma. The results of that investigation were released on April 27, 2018.

The FDA and local regulatory officials eventually traced contaminated romaine lettuce to numerous other farms, and processing and packing facilities in the Yuma growing area.

FDA, CDC, and state agents fanned out in Yuma County on June 4 — nearly three months after illnesses were first reported.

They collected water, soil, and manure samples from vegetable fields, the single feedlot there, and took samples along various points in an irrigation canal serving the area to determine the source of the bacteria. They also interviewed produce farmers and packers and conducted a regulatory inspection.

The outbreak strain could only be identified in water samples taken from the canal in the Wellton-Mohawk Irrigation and Drainage District, according to the FDA environmental assessment. Those samples were taken in locations adjacent and downstream from the feedlot.

By June 27, 2018, some 210 people infected with that strain of E. coli had been reported from 36 states and several Canadian provinces. Ninety-six people had been hospitalized, including 27 people who developed kidney failure. Five people died. By June 28, the outbreak appeared to be over, according to the CDC.

The process by which public health officials went about the task of pinpointing the cause of the outbreak was flawed, according to Kay Pricola, who represents the Imperial Valley Vegetable Growers Association on the California Leafy Greens Marketing Agreement subcommittee on “adjacent lands.”

“Here’s my criticism of what started this,” Pricola said. “The powers that be at the CDC, USDA, didn’t show up on the scene for 75 days. It was almost three months later. As they start doing the testing and trying to find the strain, it’s no longer hot. Conditions have changed.”

The FDA’s environmental assessment report says as much: “Because the Yuma region’s growing season had concluded weeks before the EA started, no leafy greens were available for sampling and testing by the EA team.”

The outbreak strain was not found in the feedlot or any of the other areas that were sampled. Investigators are not sure how it got into the canal water.

“A large animal-feeding operation is nearby but no obvious route for contamination from this facility to the irrigation canal was identified. Other explanations are possible, although the (environmental assessment) team found no evidence to support them,” according to the report.

In the absence of hard data, vegetable growers and cattlemen alike brush aside implications that a feedlot was at fault.

Oldfield emphasized that growers and cattlemen in the Imperial Valley have worked well together for years, and he pointed at a study performed at a Nebraska research facility whose conditions, he said, were nothing like those in Imperial County: There were five months of drought, produce was planted against the feedlot’s fence line, and there were no dust-mitigation measures in place.

Dust-mitigation requirements in California, which call for the application of water to manage dust in livestock pens and on roads, should reduce the transmission of bacteria, according to Oldfield.

Valley cattlemen fed more than 770,000 head in the 1970s, according to USDA figures. But the industry has been in decline for years now. Japanese buyers, which had been buying cattle from the Valley that was under 20 months old, started buying beef from other suppliers in 2013, and National Beef’s Brawley packing facility closed its doors in 2014.

“As the county with the highest concentration of feedlots, we are the No. 1 feedlot cattle county in California,” Pricola said. “We’re ninth in California for crop production to include cattle, but there have been no known problems, no outbreaks traceable to here.

“Even with the four outbreaks — Yuma, Salinas, Santa Maria, and another in Salinas — none were here. That speaks volumes to me about how we’re able to coexist and respect each other,” she added.

Cattle is the No. 1 commodity produced in Imperial County, with a gross value in excess of $449 million, according to the most recent Imperial County Agricultural Crop and Livestock Report. Data from 2019, the last available year, shows that there were more than 386,000 head of cattle in the Imperial Valley.

Last August, the Imperial County Board of Supervisors approved an expansion plan for El Toro Land & Cattle Co. that would have the Heber feedlot add 17,000 new head of cattle over a period of two years. The plan came under fire almost immediately. Three lawsuits were filed to halt the expansion until further environmental impacts could be assessed.

One of the lawsuits was filed by Scaroni Properties, which is owned by Linda Rossi and Steve Scaroni, who own and manage land in the immediate vicinity of the expansion project.

“Major buyers such as McDonalds, Yum Brands and many other buyers of leafy greens who supply grocery, food service and schools, all require a minimum one-mile buffer radius of any cattle feedlot operation. Some retail and food service retailers have created internal protocols that call for a two-mile buffer as an added precaution.

“Expanding a feedlot, given these limitations on fruit and vegetable production, significantly impacts neighboring agriculture by limiting not only the crops that can be grown, but the value of land for local owners as a result,” according to the Scaroni lawsuit.

El Toro Land & Cattle has since requested the county rescind its approval, which it quietly did on March 2.

It’s hard to say what comes next. The FDA, in November, announced the launch of a multi-year study to understand pathogens in the environment that cause food-borne illnesses. The study will look at how pathogens survive and move through the environment and possibly contaminate produce. Valley growers and feedlots, meanwhile, will continue to coexist.

IID Board: Hamby Gets Decisive Win in Div. 2 Run-off