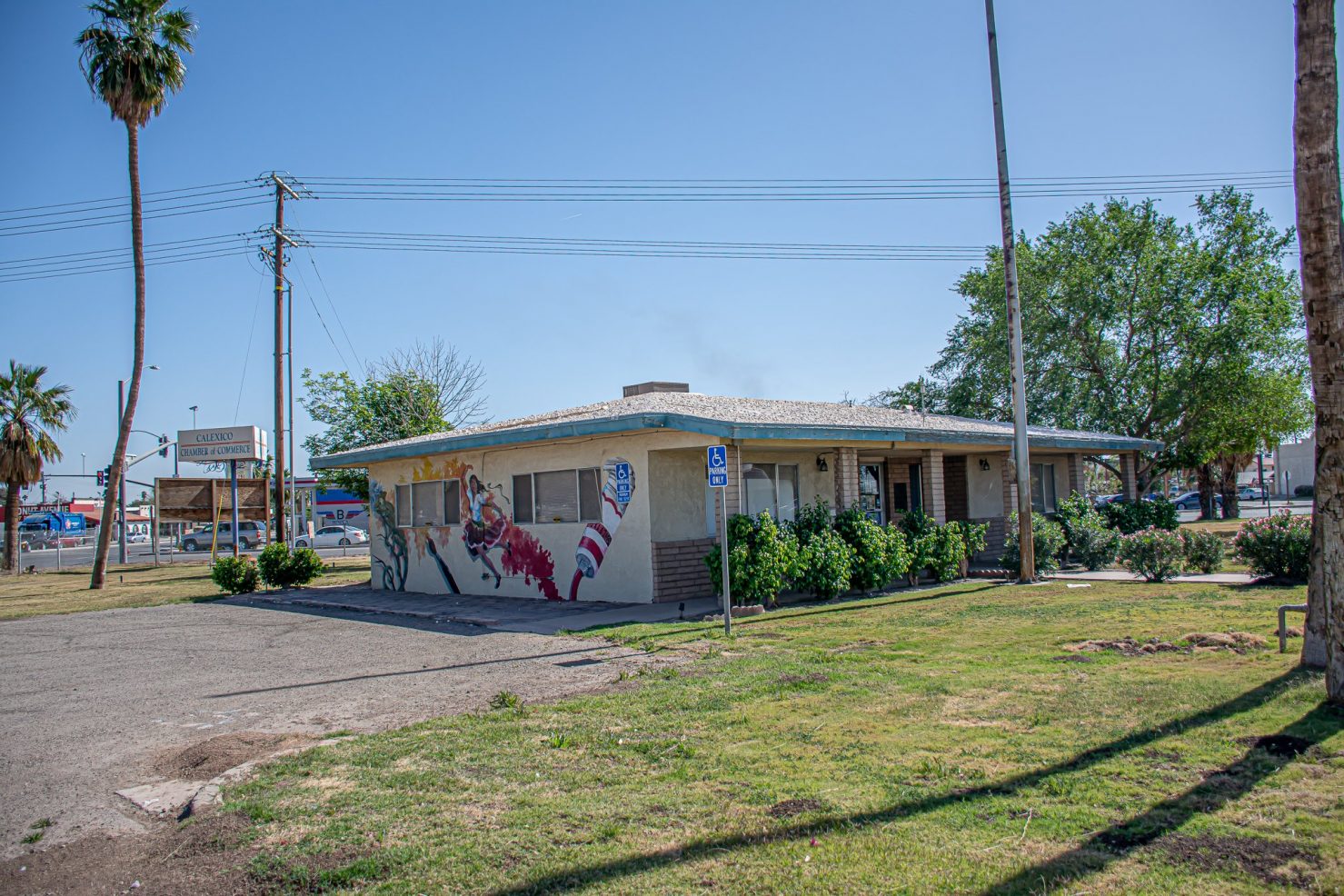 The now-closed Calexico Chamber of Commerce offices at the northwest corner of Highway 111 and Highway 98 is shown recently. Chamber officials are working to reopen the dormant organization, while some city officials think the city should play an active role in the chamber’s resurgence. | CAMILO GARCIA JR. PHOTO
Home
Business
In BusinessFeatured StoriesLocal News

CALEXICO — An air of uncertainty around the future of the Calexico Chamber of Commerce continues to surround the organization, compounded recently by reports that its longtime executive director has stepped down.

It’s been a year since chamber officials decided to close, halting membership renewals and going on what has been an indefinite hiatus, which included the layoff of Executive Director Hildy Carrillo, a term she herself used when contacted by this newspaper some months ago.

Yet now, representatives with the Calexico chamber have confirmed Carrillo’s official departure from the business advocacy organization.

“Hildy has since retired,” said her cousin Victor Carrillo, who spoke on behalf of the chamber on Monday, March 22. “If the chamber is ever to reopen, Hildy won’t be part of it.”

Hildy Carrillo did not return multiple requests for comment on her departure. However, Victor Carrillo, a former Calexico mayor, did confirm she made the decision to retire last fall during the chamber’s closure.

There is growing concern from the two council members who question the reasons the organization closed at time when businesses need the most guidance and advocacy.

Meanwhile, no concrete date has been confirmed for when the chamber plans to reopen.

“When COVID hit, all of our plans changed, and unfortunately we had to close the chamber,” said Gil Acuña, one of three current Calexico chamber presidents. “We are really in dire need for a budget, but we just don’t have the income right now.”

Prior to the pandemic, the Calexico Chamber of Commerce had been facing financial difficulties that made surviving 2020 nearly impossible, Victor Carrillo explained.

“A lot of the chamber’s primary funding source is the membership. That pays for the salaries, the expenses, and the operations of the chamber,” Victor Carrillo said. “Calexico, like some of the other small chambers, is on a very tight budget.”

The former executive director shared similar sentiments about the financial state of the chamber in a previous interview with the Calexico Chronicle in fall 2019.

“I think all chambers are struggling. That’s just how it is now,” stated Hildy Carrillo in Chronicle story from Nov. 20, 2019. “We’re having a little bit of a hard time.”

Currently, Acuña, Eduardo Rivera and Daniel Romero have been leading the chamber’s efforts to reopen as co-presidents, Victor Carrillo said.

“Right now, there is an effort to reorganize, regroup, and there’s a potential for the chamber to be able to restart,” Victor Carrillo said. “We are having meetings and we still have other meetings projected, but a resolution hasn’t been reached yet. … it is a process for the next couple of months.”

A main focus for the chamber is get open first, “after that the next thing is to attract the former membership, then new members because that will make us viable,” Victor Carrillo explained.

He said there are currently no plans to seek a new executive director, but Victor Carrillo believes the Calexico chamber will make such a decision once operations return to normal.

In contrast to the efforts described by Victor Carrillo and Acuña to reopen, two City Council representatives are convinced they will be able to move the reopening process farther along by having the city take a more proactive approach to the nonprofit organization.

“In my opinion, the Chamber of Commerce requires new blood, which brings new ideas, new relationships, among other things, to initiate a change,” council member Romo said recently.

Her concerns regarding the chamber were raised at the end of the City Council meeting on March 17, in which she requested a report be prepared by City Manager Miguel Figueroa detailing the status of the chamber.

“I believe that the chamber should not have closed, since it was able to connect with its members through electronic networks,” Romo said in an interview with this newspaper.

Although Romo wouldn’t comment on why she thought a report by the city manager was necessary, she did mention that “a few weeks ago the city manager received several members of the Chamber of Commerce in his office,” and that she would like to see a “joint reopening project” created between the city and the Calexico chamber.

“All companies without exception were affected in some way” by the closure of the Chamber of Commerce, Romo said. She believes “had it not closed” more businesses “would have participated in obtaining more economic funds and tools for companies.”

Sharing similar sentiments was Ureña, who also believed the city should take a more proactive approach to the nonprofit Chamber of Commerce.

“I don’t really buy this story of there’s no money during COVID so the chamber had to close, but if that was the case, then it comes back to City Hall,” Ureña said. “What is the City Hall doing to make sure the Chamber of Commerce is open so that it can help these businesses during these very tough times?”

Ureña said he would like the city to utilize some of the COVID relief aid to help re-establish the Chamber of Commerce with at least $200,000 injected into the organization.

“I want to include everyone into the new Chamber of Commerce, and I really want to get it up and going as soon as possible,” Ureña said.

Despite the ambitions of both Romo and Ureña, City Manager Miguel Figueroa downplayed the city’s involvement in any chamber’s reopening, saying it needs to “come together for the good of our business community in Calexico, but that’s something for them to address.”

“We definitely want to see a chamber of commerce in Calexico thrive,” Figueroa said, to result in the “business promotion we need here in Calexico.”

Victor Carrillo also clarified that the Calexico Chamber is a nonprofit organization that is separate from the city and that neither he nor the three presidents have heard from Romo or Ureña regarding their proposed plans.

One Member Responds to Chamber’s Closure

One Calexico chamber member said she was unaware of the executive director’s departure from the chamber, nor was she notified of the chamber’s decision to close last March.

“During the pandemic it was evident that there would not be any meetings,” said Maritza Hurtado, former mayor and owner of Barron Enterprises in Calexico. “I just wonder how, if it was true that they’re closing, why is it I didn’t hear that information?”

Hurtado did recall speaking to the former executive director about the chamber’s potential eligibility to receive funding by applying for a Payment Protection Program loan, which was designed for organizations like the chamber during the start of the pandemic.

“I told her, ‘Hey, I can help you, I’ll do it as a volunteer. I can help the chamber apply for PPP’ because that’s what actually helped a lot of businesses,” Hurtado recalled. “I was aware that it was available for the nonprofit, but I never heard a response back.”

Hurtado hopes the chamber can restart soon, as she’s noticed a serious lack of information being provided to the business community regarding applying for pandemic relief programs like PPP or even Pandemic Unemployment Assistance, which was created under the pandemic relief for self-employed businesses.

“I had one lady tell me she never knew what PUA was, and she had been suffering,” Hurtado recalled a recent conversation with a client. “She had lost everything, and she could have qualified for this a long time ago.”

To fill the void left behind by the Calexico chamber’s closure, one Calexico business owner has formed the Calexico Independent Chamber of Commerce to help speak up for local businesses.

“In the beginning, to prove what we can do as a community, I need to show results,” said Jesús Gallardo, executive director of the Calexico Independent Chamber. “That’s why I’m financing everything myself, and I’m not asking anyone to put any money because I don’t want anyone to think I’m doing this for profit.”

Gallardo had the idea to form an independent chamber back in October 2019, after being a Calexico Chamber of Commerce member for about six years and not receiving the type of support he felt other chambers in the Valley were providing members.

“Something that I’ve noticed about the Calexico Chamber of Commerce, there was no education for business owners on how to do business permits, on how to do marketing, or how to do anything while other chambers do all of that,” Gallardo said. “Their events are aimed at helping and developing relationships rather than just having cocktails and parties.”

In contrast, Gallardo said he hopes to have his independent chamber focus on providing security and marketing for local businesses under one platform.

“Security is one of the most important aspects of the movement I’m trying to create, because we get broken into on a daily basis as a downtown area,” he said. “As a chamber, how can I ask businesses to build something here, bring more jobs and revenue to the city if it isn’t safe?”

Although Gallardo has been in contact with city officials, he said he prefers to continue operating his chamber independently “to show businesses, to show our city council, and show our city management what we as a community are capable of doing.”

Because he does not collect due, Gallardo said he also does not track what he considers membership per se.

“We don’t need anything from businesses, but their support,” Gallardo said. “The managers and owners of the businesses I’ve talked to here in downtown are happy they are finally going to have a voice at City Hall.” 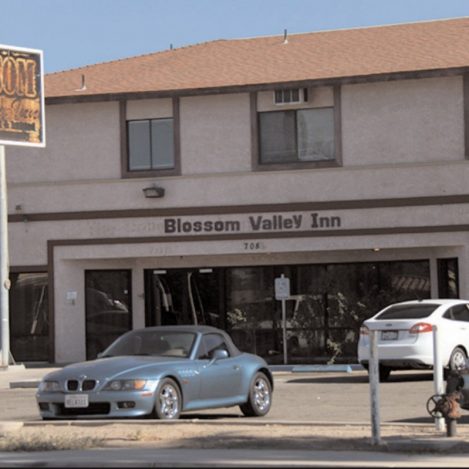