IMPERIAL COUNTY — The following reports were collected from the Imperial County Sheriff’s Office call logs from March 11 through March 16.

6:21 a.m.: A Niland construction company near the intersection of Alcott Road and Davis Road reported that windows and tires at the business had been vandalized.

10:03 a.m.: A citizen called sheriff’s deputies to report that a man wearing a gray jacket and gray jeans was at the Red Earth Casino in Salton Sea Beach harassing customers at the gas pumps.

10:58 a.m.: A Winterhaven resident called deputies to report that the RV park where she is living is holding her mail and has refused to give it to her for more than a week. She told deputies that the post office told her that they couldn’t do anything and referred her to the Sheriff’s Office.

11:35 a.m.: A resident of Cholla Road in Ocotillo reported that her daughter refused to take her to her doctor appointment, threatened to kill her and threatened to kick her out of the house.

12:11 p.m.: A Bombay Beach resident on Hobbs Road called deputies to report that a dog was trying to kill her chickens.

1:18 p.m.: A Salton City resident reported a group of juveniles ranging in age from 5 to 11 riding off-road vehicles with no helmets, accompanied by a dog with no leash.

5:22 p.m.: A resident of Dogwood Road in Imperial called deputies after he returned home from running errands to find an unknown man, dressed all in gray, on his property. The resident confronted the man who then attacked him before fleeing northbound on foot.

3:56 a.m.: A resident of the Slab City area requested a patrol check after hearing people whispering outside his camp.

7:32 a.m.: A resident of Andrade Road in Winterhaven reported that six puppies and two adult dogs were wandering around in the area. The caller was concerned for the dogs’ safety and believed that somebody dumped them there.

9:10 a.m.: A window was reported stolen from a fifth-wheel trailer parked at Red Hill Marina.

10:42 a.m.: A resident of Applestill Road in El Centro called deputies to report that he believes that his daughter may be a victim of human trafficking.

3:46 p.m.: A resident of Rio Vista Road in Seeley reported a neighbor “spraying rat poison into the air” and requested that a deputy intervene. The neighbors consented to a search of their property, but deputies were unable to locate any poison or any suspicious activity.

3:48 p.m.: A 16-foot utility trailer was reported stolen from a property on Evan Hewes Highway in El Centro. The reporting party told deputies that he believes he has video footage of the subjects who stole the trailer.

5:41 p.m.: The manager of a motel in Niland reported that a female subject had threatened to kill her. The subject was last seen headed toward the Buckshot Diner.

10:45 p.m.: A Salton Sea Beach resident reported that a white, king cab pickup truck was creeping through alleys near the intersection of Thermal Road and Santa Rosa Road with its lights turned off.

8:38 p.m.: An El Centro area resident reported hearing people outside his trailer talking about him getting in and out of the shower.

10:43 a.m.: A resident of La Brucherie Road in Imperial called deputies to report that a man who was hired to work on repairing an RV had instead moved into the RV with his three children.

12:46 p.m.: A citizen called deputies to express concern about a sheep near the corner of Holt Road and Keystone Road in Brawley that was separated from its flock and had been laying down for three days.

4:53 p.m.: A citizen on Stallard Road in Palo Verde reported that an orange drone had been following her and her family while they were riding quads.

8:01 a.m.: A suspicious black Nissan van was reported in the area of Fredericks Road and Highway 111, in an area commonly used to illegally dump garbage. The reporting party said that the van had been in the area for about 40 minutes. 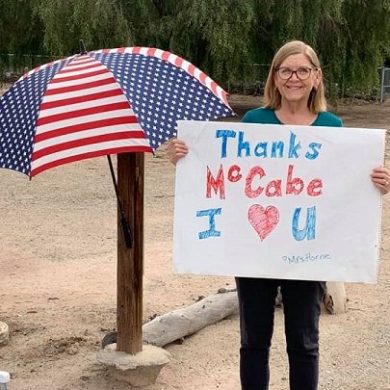