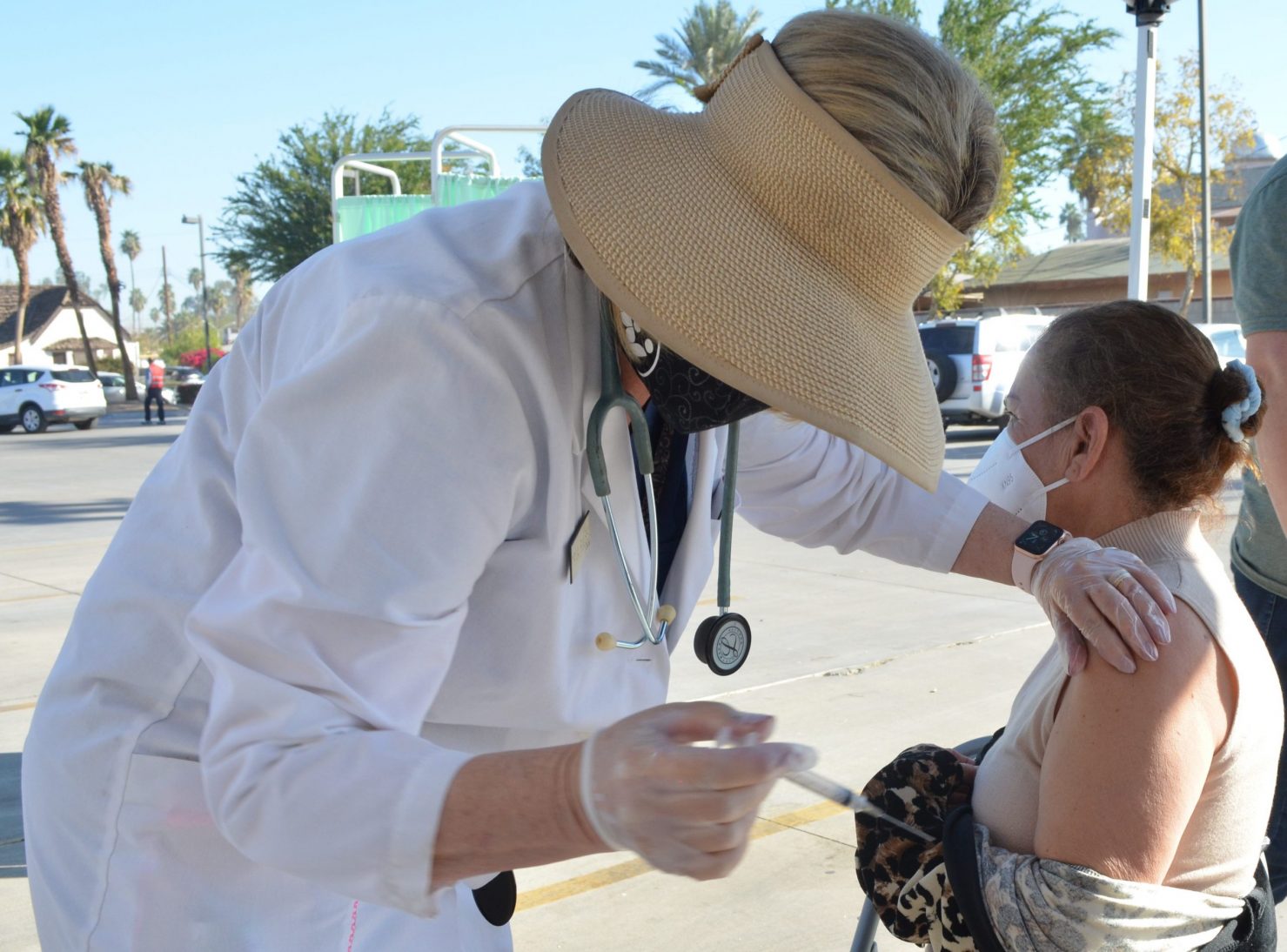 Brawley resident Bertha Alicia Castellanos was one of the first of the 100 seniors who were scheduled to be vaccinated during a clinic hosted by the Calexico Wellness Center on Wednesday, Feb. 24. | JULIO MORALES PHOTO
Home
COVID-19
In COVID-19Featured StoriesLocal News

CALEXICO — The recent efforts of two local healthcare providers temporarily turned Calexico into a COVID-19 vaccination destination, with some 1,300 vaccines administered to seniors over the course of four days.

On Wednesday, Feb. 24, the Calexico Wellness Center was scheduled to administer the Pfizer-BioNTech vaccine to 100 seniors who had preregistered in advance for the clinic.

A very grateful Virginia Castañeda was among the first to be vaccinated. The 71-year-old Mexicali resident said she had previously attempted to register for a vaccination clinic that the county Public Health Department had hosted at Imperial Valley College but was turned away after those appointments quickly filled.

For the past several months, Castañeda said she has been limiting her social interaction, even limiting the time she spends with her family.

Yet, she has continued to work in El Centro throughout that time as part of a production crew that employs more than 80 individuals, and which has experienced its share of positive cases, despite the safety protocols the worksite had adopted.

The vaccine, she said, will ease some of her safety concerns but she doesn’t plan on altering any of the precautions she has been strictly following.

“This won’t change much,” Castañeda said in Spanish. “We still need to take care of ourselves because this is just a test.”

The seniors who received the vaccine from the Calexico Wellness Center were its patients, said Blanca Morales, chief executive officer. While many of those who registered to be vaccinated arrived in vehicles, others arrived on foot.

“We’re starting with the oldest,” Morales said. “The majority of them want it.”

The center provides healthcare services for about 350 seniors and had requested just as many vaccines from Public Health, she said.

As of Feb. 16, the center had also compiled a waiting list of nearly 150 nonpatients who were requesting to be vaccinated.

As a patient of the Wellness Center, 69-year-old Calexico resident Sergio Humberto Hernandez jumped at the chance to be vaccinated. He, too, had attempted to get vaccinated at a clinic hosted previously in the Valley, but also was turned away when the appointments filled.

Even though he considers himself to be of good health, Hernandez said the current situation demands he do all he can to protect himself and others.

“With everybody doing their part to get vaccinated, the situation should improve little by little,” he said. “This should all be over soon enough.”

Aside from its first-ever vaccination clinic, the Wellness Center has been ramping up its efforts to reach vulnerable members of the population amid the pandemic, as well.

The center began testing homeless individuals for COVID-19 in May and has since taken them on as regular patients. They number about 65 and include farmworkers, too.

“Some of them come to our clinic, or we go to them,” Morales said.

In December, the center also opened a thrift store, located at 406 E. Second St., which is considered an extension of its community outreach efforts that also includes the monthly provision of food to local homeless individuals, she said.

On Sunday, Feb. 21, hundreds of senior citizens received a COVID-19 vaccination during a large-scale, drive-through clinic organized by Dr. Tien Vo and his Vo Neighborhood Medical Clinic in Calexico.

The vaccination clinic was made possible after Vo had received 965 doses of the Pfizer-BioNTech vaccine from the county Public Health Department on Feb. 19, he said.

The allocation from the county was expected to have arrived earlier in the week but was delayed by inclement weather in parts of the East Coast and in the South, he said.

Vo’s allocation came from a stockpile of the county’s second doses, and the unexpected arrival of Vo’s Pfizer doses on Feb. 19 jolted the physician and his employees into action. By the next day, they were able to register about 550 of his patients who are 65 years of age or older for Sunday’s vaccination clinic.

The large amount of vaccine that arrived also prompted Vo to host Sunday’s event in the parking lot of the Calexico 10 Theatres on Scaroni Road, which provided easy access for participants and a considerable amount of space to set up operations.

“This is the only way we can get it out quickly to people,” Vo said.

On top of the hundreds of seniors who were successfully vaccinated on Sunday, Vo said he expected vaccinations to continue Monday, Feb. 22, and possibly the following day at his medical center on Cole Boulevard to use up all off the allocation he received from the county.

Students with Disabilities Across California Stuck in Limbo

That same day, his staff was also able to administer 250 doses of the Moderna vaccine at the clinic in Calexico, 140 doses in El Centro, and 40 doses in Brawley, he said.

Those vaccines were part of an allocation of 600 doses of the Moderna vaccine that was distributed among his three clinics, with 200 doses each going to his offices in Calexico, El Centro, and Brawley, he said.

Sunday’s vaccination clinic was supposed to have gotten underway at 9 a.m. but was started about an hour earlier to accommodate the line of cars that had started forming about 7 a.m., Vo said.

Calexico resident Evangelina Rodriguez said that even though her appointment was set up for noon, she was allowed to receive the vaccine a few hours in advance after having driven to the site ahead of time to observe how the clinic would operate and the volunteers on site urged her to get in line.

The 78-year-old said she lives alone in the Calexico Senior Apartments, hasn’t been venturing out in public all that much during the pandemic and limiting her social interaction to her immediate family.

Still, Rodriguez said getting the vaccination was a relief, and that it was the first time she had attempted to register to receive a COVID-19 vaccine. Like the hundreds of others who participated in Sunday’s clinic, Rodriguez had been contacted by Vo’s staff to ask whether she would like to register for the event.

Heber resident Carlos Romo Ramos said he had previously attempted to register to receive the vaccine from other local healthcare providers but was not successful until Vo’s staff called him to notify him of Sunday’s event.

Romo said he is aware of how his type 2 diabetes, high blood pressure and past heart problems places him in danger of serious illness or death if he contracts COVID-19. His vaccination on Sunday helped ease those concerns.

Sunday’s mass vaccination event also drew the assistance of the Calexico Fire Department, various community-based organizations, and the Heffernan Memorial Healthcare District, which was handing out bags of personal protective equipment and hand sanitizer to participants as they left the premises.

The healthcare district has been in constant communication with the Public Health Department and local healthcare providers to determine how it can assist COVID-19 recovery efforts.

Heffernan is currently considering the purchase of two specialized freezers to store COVID-19 vaccine but is awaiting direction from the county regarding how the freezers might best be put to use, said Tony Pimentel, Heffernan spokesperson, who attended the vaccination event.

Vo said he recently was able to acquire a subzero freezer that can store more than 20,000 doses of the Pfizer-BioNTech vaccine and is amenable to storing other healthcare providers’ doses in it, as well. In June, he had acquired two similar freezers to store the Moderna Vaccine. 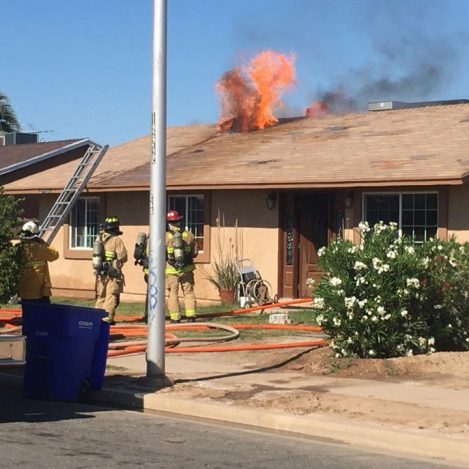