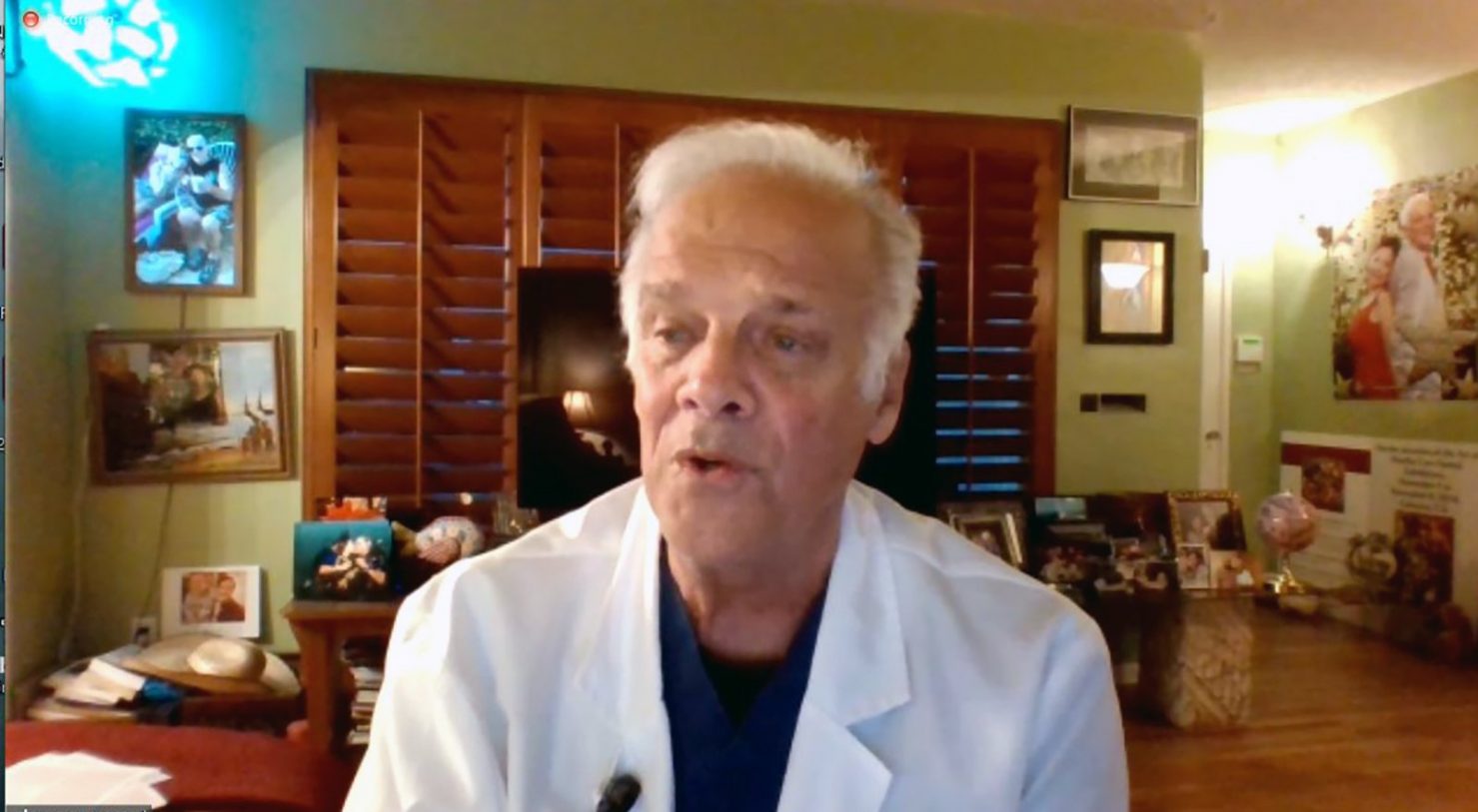 Dr. George Fareed was one of two Imperial Valley doctors who participated in an online conference Feb. 11 to promote the idea of using early-treatment protocols in the battle against the COVID-19 pandemic. | VIDEO CAPTURE
Home
COVID-19
In COVID-19Regional News

Imperial Valley physicians Dr. George Fareed and Dr. Brian Tyson, both outspoken advocates on the national stage for early treatment for COVID-19, took part in an online conference Feb. 11 along with several doctors from around the country who have controversial opinions on issues related to COVID, such as the efficacy of vaccines, wearing masks, and practicing social distancing.

Fareed and Tyson focused their efforts on early-treatment protocols using drugs such as hydroxychloroquine and ivermectin. Fareed said that he and Tyson had collectively treated about 5,000 patients with these techniques and had seen exceptionally good results in most patients.

“Our country — FDA, (Dr. Anthony) Fauci, NIH, CDC — has been inhumane in what they’ve lacked in promoting early treatment,” Fareed said. “It’s truly a crime. It’s inhumane, that’s all I can say.”

Fareed said that many of his fellow practitioners in the Imperial Valley “fell for” the mainstream narrative, gave their patients monoclonal antibodies and sent them home. When they took a turn for the worse, Fareed said he was still able to help them using the ivermectin protocol.

“There are hundreds of articles showing that this is effective,” he said. “EUA (Emergency Use Authorization by the U.S. Food and Drug Administration) should have been easy to offer and everyone should have been encouraged to do what we’ve been doing and won’t stop doing. It just feels so gratifying to do something when you know you’re right.”

Tyson, who owns and practices at All Valley Urgent Care in El Centro, has been featured on the One American News network in the past to explain his stance on early-treatment protocols for COVID-19.

Tyson said that he has sourced early-intervention drugs from a local pharmacist since the beginning of the pandemic, even though the treatments were considered controversial at the time.

“Luckily for us, in our valley, rural communities tend to stick together and sometimes you can form an alliance,” he said. “So, we’ve made those alliances and we’ve had those alliances the whole time.”

Of the 5,000 patients Fareed and Tyson have treated, Tyson said that only four have died and those four had only partial treatment or were cases where the virus presented too late for the drugs to help.

“It was not anybody who presented early and got full treatment,” he said. “Out of 5,000 in a valley that is predominantly Hispanic, overweight and diabetic. That’s a lot of the population that we deal with.”

Even without one of the most common and most controversial early-intervention drugs, hydroxychloroquine, Tyson said that COVID-19 patients should still be using drugs such as albuterol, receiving oxygen, hydration through intravenous fluids and vitamins D3 and C, which have shown to be effective in preventing the virus.

“We see all of these things that are available and yet still nobody wants to talk about even that,” he said. “Even if hydroxychloroquine didn’t work — say it doesn’t work — there’s no harm in giving it. We’re not looking at the big picture as physicians, right? Treat, observe, re-treat. Tailored treatment, right? Isn’t that what we do?”

Tyson added that he believes the National Institute of Health and the Centers for Disease Control and Prevention should be held accountable for “malpractice,” and he questioned the practice of isolating those with COVID at home with their families.

“We’re isolating sick people with non-sick people and then we want to know why everybody in the household gets sick,” he said. “These are the policies that didn’t make sense. I come from a very commonsense background of practicing medicine. If you do something and it works, repeat it, and see if you get the same result, right? Isn’t that what we’re taught? If you do something and they get better, try it again and if they get better, great. If not, let’s try something else. That’s what we do in medicine all the time.”