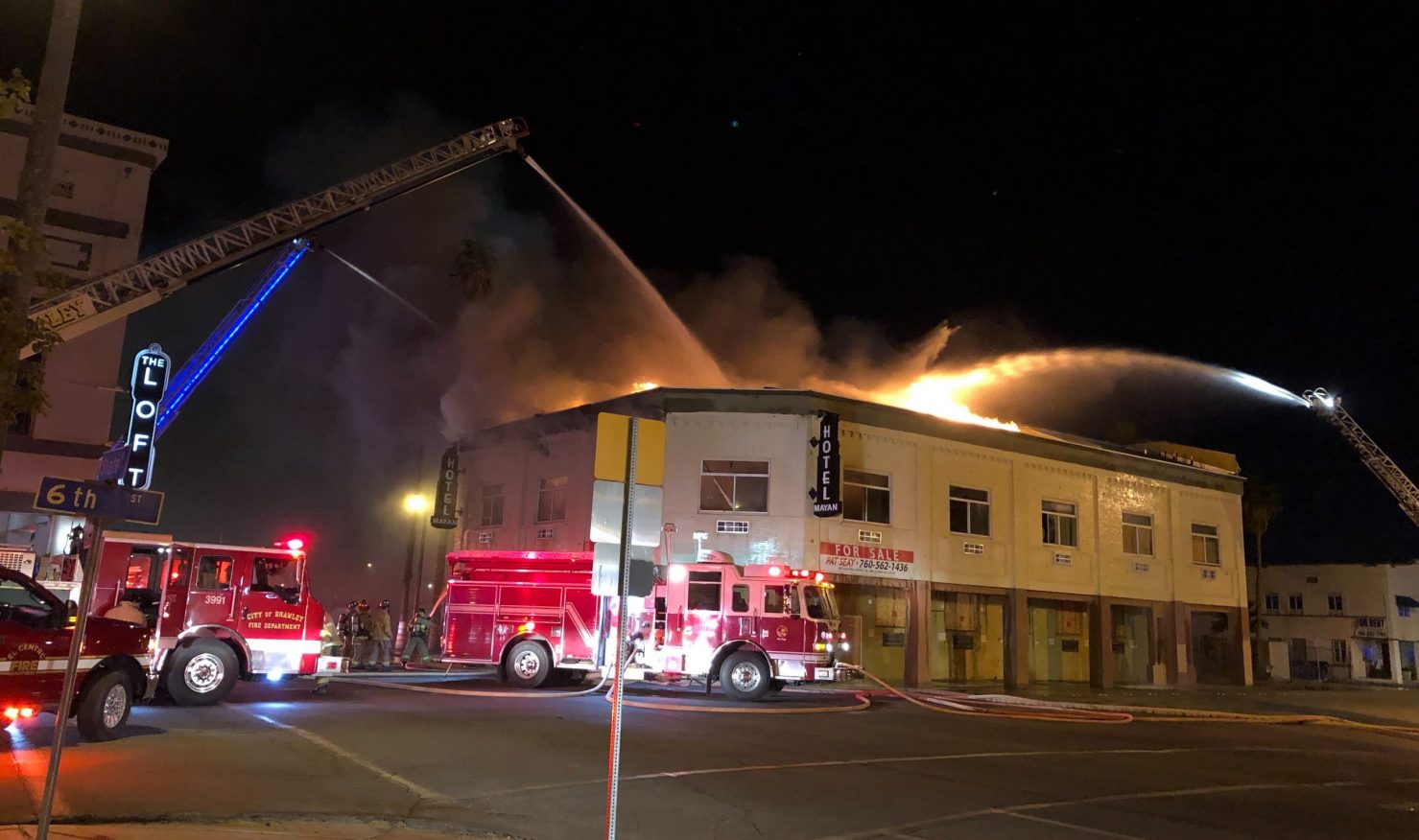 Three ladder trucks can be seen dumping thousands of gallons of water per minute onto the roof of the burning Mayan Hotel in downtown El Centro. A fire was reported at the vacant building at 11:08 p.m. Saturday, Feb. 13, and as many as 31 firefighters from eight department arrived in El Centro at the height of the three-alarm blaze to assist. | SCREEN CAPTURE FROM VIDEO FOOTAGE COURTESY OF ANTHONY AGUILAR
Home
Public Safety
In Public SafetyRegional News

EL CENTRO — The inferno that raged through the boarded-up Mayan Hotel in downtown El Centro over the weekend was expected to smolder through the end of Monday, Feb. 15, as fire officials now start to piece together the chain of events that might have caused the building with a troubled past to go up in flames.

Arson is already suspected to be the cause of the fire, whether accidental or intentional, yet with the interior of the building unstable and still burning in some small areas, investigators were expected to seek out any potential video surveillance footage from surrounding businesses this week that might give further clues into the blaze’s origin, El Centro fire Battalion Chief Cedric Ceseña said on Sunday night, Feb. 14.

“There were no services (electricity or gas) to the building and no reason why the fire would have started,” said Ceseña, adding that the Mayan at 595 W. State St. had been closed for at least a couple of years. “It would have to be an act of carelessness, someone who didn’t put out a fire, or on purpose.”

Flame and smoke were reported to the El Centro police and fire dispatch center through multiple 911 calls at 11:18 p.m. Saturday, Feb. 13. By midnight, after a third alarm had been sounded due to the rapid advance of the flames, as many as 31 firefighters and three ladder trucks dousing the roof of the three-story building were on scene through the early-morning hours to protect homes and nearby businesses in the neighborhood.

Ceseña said during an interview Feb. 14 that there has been a history of squatters breaking into the sealed building and staying there. In mid-December, a smaller fire ignited in the former hotel-turned-apartment complex that saw El Centro crews rescue a woman from inside.

Although firefighters were never able to fully enter the building late Saturday night because the heat, flames, and smoke were too intense by the time the initial crews arrived, it was not believed anyone was in the building.

“There was no one around this time telling us someone was inside,” Ceseña said, adding that when El Centro fire arrived at the Mayan in December for a smaller fire, there was a transient telling crews a woman was trapped within.

It wasn’t immediately clear when the Mayan Hotel had last been opened, yet according to previous media reports, the building had been deemed unlivable by El Centro code enforcement officers for substandard conditions in early 2018, and all of those residing in the units were forced out.

Ceseña said attempts had been made to reopen the facility by ownership, and several months ago, a security guard had been posted in front of the building to keep people away. However, he said the guard had not been there for some months.

At various times over the past decade and more, the hotel has been beset by bed-bug infestations, crime, drugs, and, at one point, had numerous residents under its roof who could be found on the state’s Megan’s Law website. The Mayan Hotel has long had a reputation as a modern-day flophouse.

The Aftermath and Ongoing Effort

Although the four walls of the Mayan remained standing on Monday morning, Feb. 15, the inside of the building is basically a smoldering heap, where Ceseña said the floors began to “pancake” on top of each other early Sunday, with fire trapped between each floor.

Still, he said the Mayan was a well-made building that will have to be torn down once the fire is extinguished. Until it is out, a single crew from El Centro Fire Department — down from eight departments total by midnight Saturday — would remain on site through the end of the day Monday.

On Sunday, Feb. 14, the single crew of anywhere from three to six firefighters, which Ceseña said rotated with other El Centro crews every six hours or so, had to deal with hot spots, or flare-ups, throughout the day.

Around 10:30 a.m. Sunday, El Centro’s aerial ladder truck was lowered, and the crew began disconnecting the hose, as onlookers attempted to get closer to the smoking building by moving around the barriers that had been erected by El Centro Public Works Department.

Yet by 3 or 4 p.m., a heavy column of gray smoke was aggressively rising from the south end of the building, as the ladder truck was again aloft, spraying a tight stream of water onto the roof. The acrid, bitter smell and taste of smoke hung heavily over the downtown and nearby neighborhoods.

“Since last night (Sunday), the remaining active areas have significantly decreased through the continued application of water from the aerial (ladder). As a result, smoke production as of this morning is minimal if not almost gone,” Ceseña stated around noon Monday.

“Structurally, all four interior walls are intact, though some (are) compromised … as cracks are beginning to develop,” he continued. “We have ceased applying water since early this morning … and are keeping the public from the (potential) collapse zones.”

Offense to Defense: That Escalated Quickly

On its initial response to the Mayan fire late Feb. 13, Ceseña reported that two engine companies with a total of 11 El Centro fire personnel arrived at the area of Sixth and State streets to find visible smoke and flame streaming from the building.

Firefighters tried to enter the building to search for occupants and attack the fire itself, but the heat and flames proved too intense and crews retreated, after a second alarm call for assistance had already been sent at 11:13 p.m.

“That fire had some time to develop (inside the building) before we were called,” Ceseña said late Sunday night. “The minute our crews got pushed back by the fire … we moved from an offensive position to a defensive position, trying to contain the fire and radiant heat from burning anything (buildings or homes) around it.”

More personnel and more equipment arrived in two waves, with Holtville, Calexico, Imperial, and Imperial County fire departments arriving about 15 minutes after the second alarm. A third alarm was sounded at 11:32 p.m., and Ceseña said it took additional crews and engines from Naval Air Facility El Centro, Brawley Fire Department and Westmorland Fire Department as long as a half hour to arrive.

By midnight, he said there were as many as 31 fire personnel helping fight the blaze, which at that point was a raging inferno with flames shooting as high as 10 feet into the air above the roof. Three ladder trucks — two north of the structure on State Street and one to the west on Sixth — with nozzles positioned above the building dumped thousands of gallons of water per minute onto the fire just to keep it under control, Ceseña explained.

Efforts continued with this intensity until around 2 a.m. Feb. 14, when Calexico fire crews were released to return home, with the remainder of the visiting departments leaving El Centro around 5 a.m., the battalion chief said.

No nearby homes or structures sustained any real smoke or water damage since the Mayan Hotel stood a safe distance from other structures, Ceseña reported, adding that even the homes directly south are buffered by an alley. However, during the height of the blaze it was the intense radiant heat that was a concern, which he indicated can cause nearby buildings to catch fire.

No fire personnel or anyone else was reported injured by the fire.

Any witnesses or individuals with information related to this fire can call 760-337-4530, according to an El Centro fire press release. 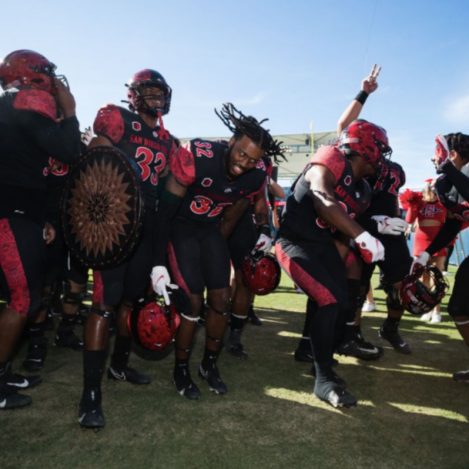