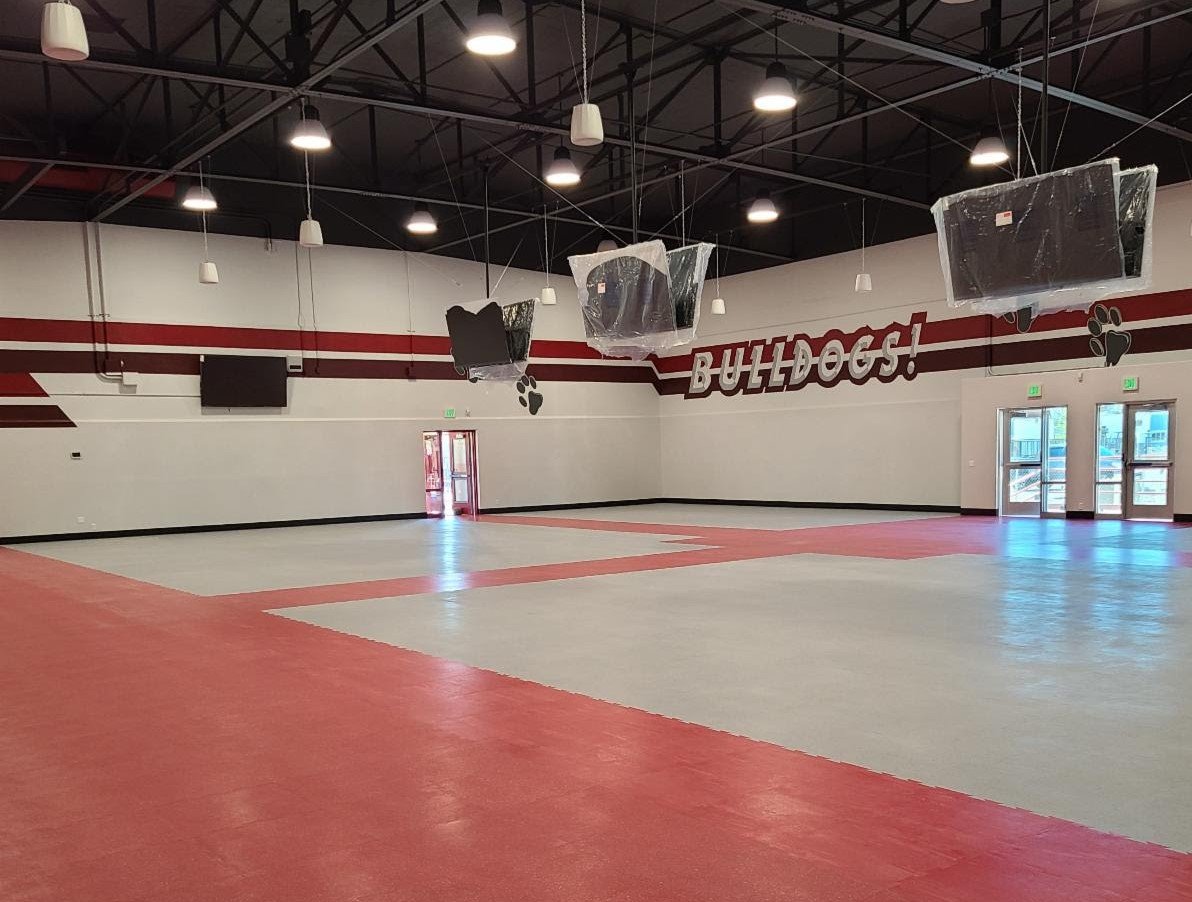 The word Bulldogs in painted in stylized text in the signature Calexico High School colors of garnet and white inside the newly renovated Godfrey Gymnasium. Video monitors still in their plastic wrap can be seen mounted around the gym. | COURTESY PHOTO
Home
Education
In EducationFeatured StoriesLocal News

CALEXICO — Although the revamped Godfrey Gymnasium at Calexico High is not quite finished and it will be some time before students will be able to take her for a spin, the school district is showing off a bit of the facility’s new shine.

The interior renovation of the gym — which was first opened on Feb. 21, 1939, at Seventh and Mary Streets before being moved to its current location on Encinas Avenue in the winter of 1954 — was finished in December as part of the second phase of the Godfrey modernization project.

“Godfrey Gym has been on my radar for years. I have been trying to make improvements with site funds as much as possible. Thanks to the recent measure passed by the community we have been able to move from small changes to a complete renovation,” Calexico High Principal Gabrielle Williams-Ballesteros said. “It has been dear to my heart for years. It is an iconic, historic building in this school that was in need of upgrades.

“I am excited for our students. I can already see them walking into Godfrey and being inspired and motivated to change their health style,” she said.

The 10,215-square-foot Godfrey Gym is part of a three-phase renovation project that started in late 2019 and will finish this coming fall, and span funding from both voter-approved bond packages, Measure V (2016) and Measure Q (2020), and from the school district’s general fund, according to Calexico Unified School District Public Information Officer Alejandra Limon.

Phase one, which was $578,000 funded through the district budget and Measure V, was for new heating, ventilation, and air-conditioning systems, paint, and a new roof.

Phase three, which is now in the planning phase, will be funded through a portion of the $47 million Measure Q bond package and involve the complete renovation of all shower, locker rooms, restrooms, office, and storage areas, according to the district.

The entire project will see the gym converted to a co-ed fitness center with state-of-the-art gym equipment that is scheduled to arrive by the end of this month, Limon stated.

“The renovated facility has been redesigned to mirror a college-level physical fitness center,” Limon said.

Among the new bells and whistles inside Godfrey proper are video monitors, including those hanging from the rafters, that have been installed throughout the gym that will allow teachers to display health information, model workout routines by health professionals, and any other information aligned to the physical education, or sports programs, Limon stated.

“A cycling corner with a monitor is also included in the building to allow students to enjoy a workout routine led by a cycling instructor. Other gym equipment will also be available for students’ use. This new equipment is scheduled to arrive within the next three weeks. The gym is now equipped with a sound system to play music as well,” she added.

Calexico High School Athletic Director Mariano Velez III called the work to Godfrey “a transformational renovation,” adding that “it is exciting to know that this iconic building will continue to serve our students for years to come.”

One of the cool features of the renovated interior that can be seen is a wall full of “word art” that Limon stated was created to inspire and motivate students and staff using the space.

“The CHS Bulldogs are hard-workers, committed, and strong, and this will be an ongoing reminder that everyone can achieve their health goals,” she said.

Godfrey Gym is one of two gymnasiums on campus, both of which will be utilized for different reasons, Limon stated. Godfrey Gym will be primarily used by physical education staff during the instructional day.

Moved to the new campus on trailers in the 1950s, the building wasn’t always named Godfrey — that’s a relatively new moniker. Limon said it was rededicated in memory of Linda Godfrey, a PE teacher at Calexico High during the 1970s and ’80s.

“On behalf of the Calexico Unified School District administration, student population, and CHS staff, we would like to express our gratitude to the community of Calexico for supporting bond measures V and Q. Our vision to have a state-of-the-art high school campus is now becoming a reality,” stated Calexico Unified Superintendent Carlos R. Gonzales. “The additional funds allocated by Measure Q will continue to help us renovate and expand Calexico High School facilities and other much-needed site projects for the benefit of our students.” 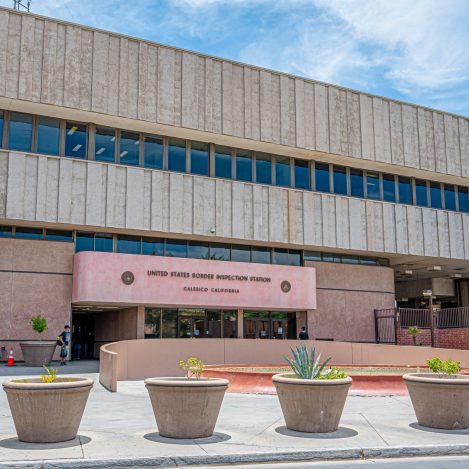 Border Travel Limits to Lift for Vaccinated in November