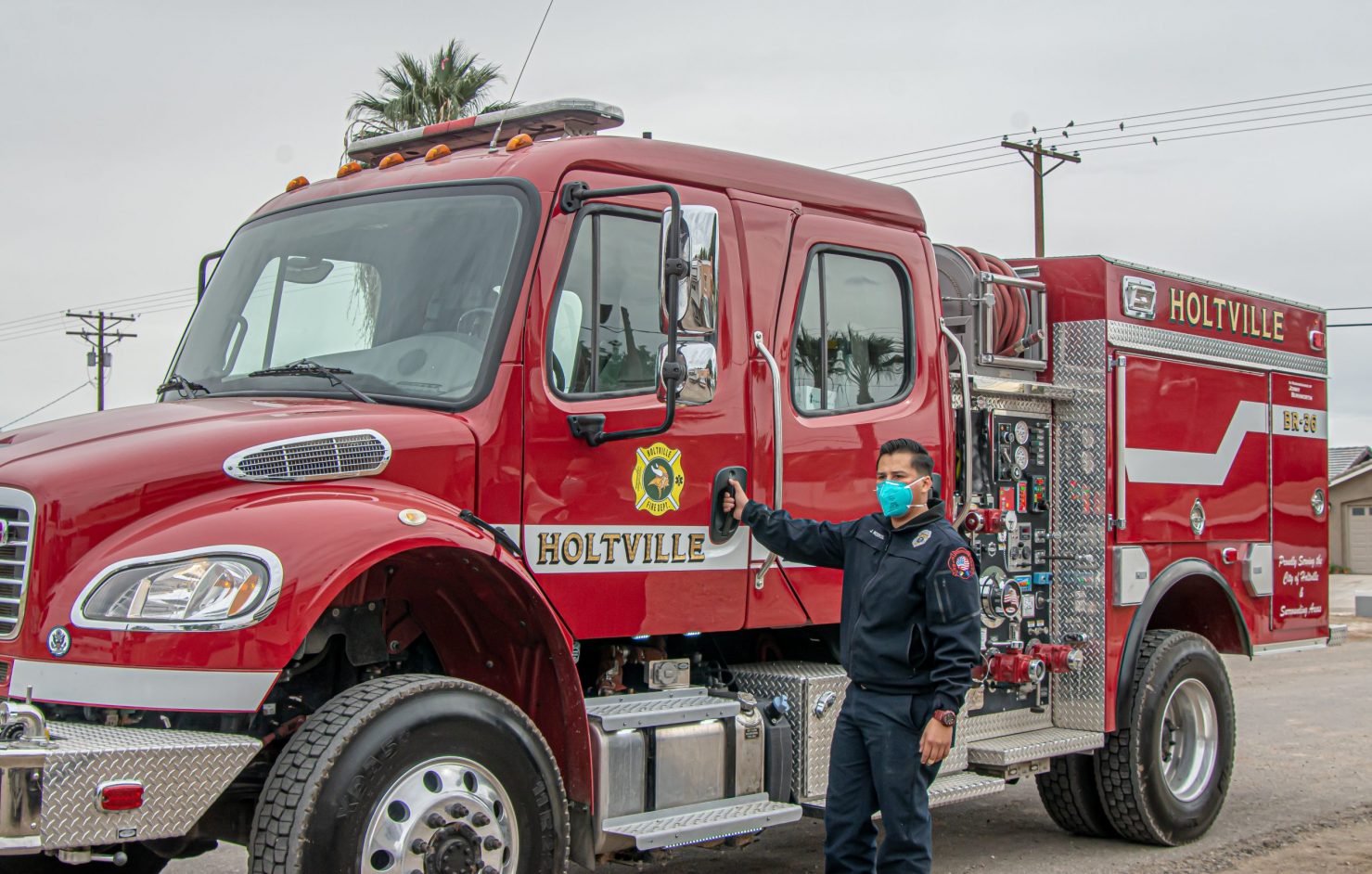 Holtville Fire Dept. Has Busiest Year Due to COVID

HOLTVILLE — The Holtville Fire Department has noticed a considerable drop in COVID-related calls for service in recent weeks, after the pandemic had contributed to the department’s record number of overall service requests in 2020.

Previously, the Fire Department was fielding about one COVID-related call a day, and is now encountering about two a week, Fire Chief Alex Silva recently said.

“COVID calls have been going down drastically, so that’s really a good thing,” Silva told the City Council during its Jan. 25 meeting.

Silva’s remarks accompanied an annual report he submitted to the City Council for review as part of the council meeting.

All told, the department fielded a total of 973 calls for service in 2020, a considerably greater number than the previous record of 844 calls set in 2013, Silva said.

And as trying as the year turned out to be for the department, it also highlighted the dedication and commitment of its personnel, whose lives were touched by the pandemic at both the professional and personal level.

“I cannot think highly enough of the work my guys have done the last year,” Silva said on Friday, Jan. 29. “They’ve stepped up and done the job without any hesitation.”

Had anyone told Silva that the coronavirus would’ve had the impact that it ultimately did in 2020, he said he wouldn’t have been able to believe it. Initial conversations he had had with colleagues in March suggested COVID-19 would “fizzle out” in a few weeks.

Instead, five of the department’s firefighters would test positive for COVID-19 by the close of the year, Silva said, while its operations continued into 2021 to employ a series of precautionary measures aimed at keeping personnel and the general public safe from potential exposure.

The firefighters who had contracted the coronavirus had done so outside of work at separate times and did not subsequently expose any of their colleagues at the worksite, Silva said.

“Nobody contracted it here due to work,” he said.

The subsequent quarantining of personnel did, however, result in a 10-day period during which time the department was not able to assist with mutual aid calls on account of having a limited number of firefighters available, Silva said.

“It’s been very trying for all of us,” he said.

To help limit firefighters’ potential exposure while responding to service calls amid the pandemic, firefighters will survey a household’s occupants to determine if anyone is COVID-positive or experiencing flu-like symptoms.

The survey is conducted by a firefighter who remains outside of the residence while practicing social distancing. If any household occupant reports being COVID-positive or experiencing symptoms, department personnel then suit up in protective gear before entering the home and having any direct interaction, Silva said.

And instead of having the usual number of three firefighters attending to the individual in need of assistance, only two will have direct contact with a patient, with the third remaining outside the residence.

The firefighters’ COVID-related protective gear includes a moisture-resistant, one-piece jumpsuit and a powered-air purifying respirator (PAPR) that has a hood connected to a high-efficiency HEPA filter worn on the waist and powered by rechargeable batteries.

“If we knew it was a COVID-related call, it took a little longer because we had to put on all our COVID protective gear,” Silva said.

Firefighters also spend additional time decontaminating its protective gear and vehicles following any response to a call for service. The decontamination process that had initially taken about half hour to complete was eventually streamlined to about 15 minutes with practice, Silva said.

Reserve Holtville Firefighter Joshua Rodriguez said it was not uncommon at the height of the pandemic for department personnel to return to the station following a service call, decontaminate themselves and their equipment, only to be called out again.

“We were pretty much doing back-to-back calls,” Rodriguez said.

As challenging as the past 10 months have been, Rodriguez said the pandemic has reminded him of the crucial role that fire departments play during such a time of crisis and his continued need for learning more about the profession.

He further acknowledged that regardless of whether a person has COVID-19, they deserve the same level of care and attention from responding firefighters during a time of crisis.

“It motivated me to be a better person and do what we do,” the 20-year-old Calexico resident said. “I’m thankful for what I do, and I’m thankful I’m ready to do it every day.”

For Rodriguez, being ready also means being certified to administer the COVID-19 vaccine. He is one of four emergency medical technicians within the department who have recently been trained by the state governor’s Office of Emergency Services to do so.

Prior to becoming certified to administer any COVID-19 vaccine, the department’s EMTs were prohibited from performing any medical intervention that would break the skin, such as using a hypodermic needle, Chief Silva said.

The department’s EMTs were trained along with personnel from other local fire departments to administer the vaccine during any upcoming mass vaccination events planned by local public health officials, Silva said.

“That’s the thing about the fire services,” Silva said, “we’ll do whatever it takes to make it happen, to make it work.”

To date, Holtville has not fared as badly as other Valley cities in terms of overall positive cases and deaths. As of Feb. 1, the city of about 6,600 residents has registered 1,003 total positive cases, with 31 of those considered active. The county Public Health Department’s website also reported the death of 38 residents to date.

By contrast, the city of Calexico, estimated population 40,000, has outpaced all other local cities and towns, with 7,033 total positive cases and 183 deaths reported by the Public Health Department as of Feb. 1.

As a resident of Calexico, Rodriguez said he has been mindful of following COVID-related health and safety guidelines whenever he’s in public.

“I’ve been really cautious about it ever since it started,” he said. “I’ve seen a lot of people impacted by it.”

Of the department’s 973 calls for emergency services, 599, or 61.5 percent, were rescue- and emergency-related, the department’s 2020 summary stated. A total of 123 fire-related incidents were reported, accounting for 12.6 percent of total call volume.

Out-of-county strike team deployments saw an increase the past year as well, totaling eight, and covered wildlands from San Diego to 50 miles south of the Oregon border.

For the past three years, the department has made use of a new brush truck for its strike team deployments, Silva said.

The brush truck is equipped with four-wheel drive and can climb steep mountainous terrain, which state emergency officials prefer to use to battle advancing blazes in place of deploying apparatus to provide structure protection, Silva said.

Local strike team deployments are reimbursed by the state, which Silva said could further offset the cost of the three-year-old brush truck and an additional fire engine which the department is hoping to acquire to replace one of its more-than-20-year-old engines.

“My goal is for the brush truck to pay for itself,” he said. “And to continue to go out on strike teams and pay for structure engine.” 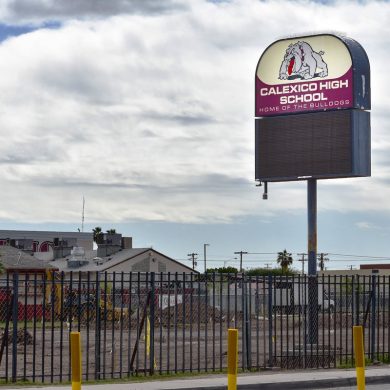