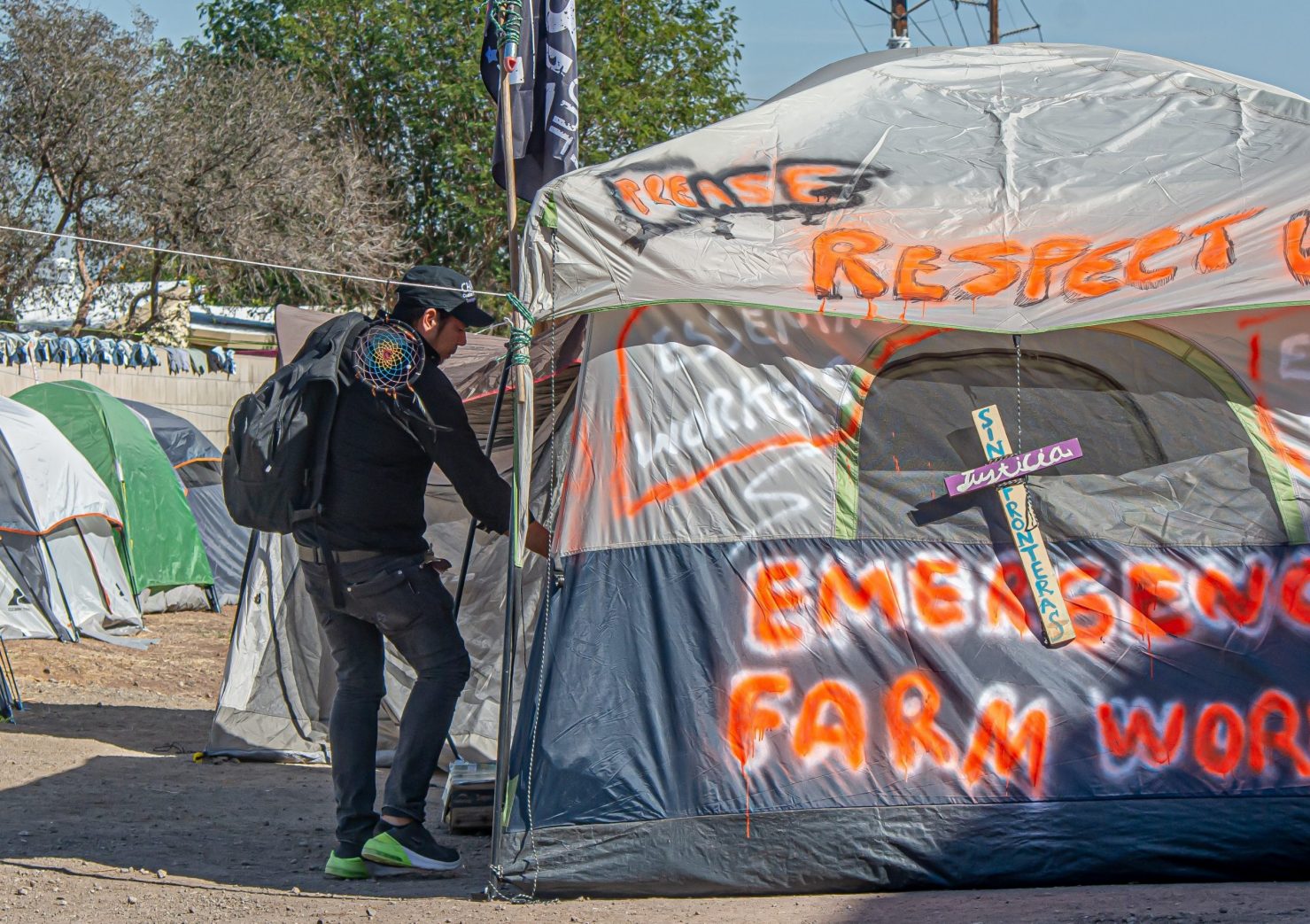 Presumably an unidentified migrant farmworker enters one of several tents at midday Wednesday, Feb. 3, that was set up at an emergency encampment reserved for farmworkers erected on a city-owned parcel of land near First Street and Andrade Avenue. The city had previously considered selling the parcel to the federal government to install a secondary border barrier. Recently, a member of the Calexico City Council is proposing establishing two permanent encampments in the city for farmworkers and the homeless. | CAMILO GARCIA JR. PHOTO
Home
Featured Stories
In Featured StoriesLocal News

CALEXICO — A proposal by Calexico City Council member Raul Ureña to establish two permanent encampments on city property for farmworkers and unemployed homeless individuals is expected to soon be taken up by the council.

The envisioned transitional housing site would allow for the relocation of an existing encampment located on city property at First Street and Andrade Avenue that is being used to house farmworkers who prefer to avoid prolonged border-crossing times.

Ureña said on Tuesday, Feb. 2, that he had hoped the matter would be discussed during the City Council’s regular meeting on Wednesday evening, Feb. 3, but the proposal appeared to not have been placed on the meeting agenda.

The planned discussion about transitional housing stems from an agreement Ureña said he reached with council member Javier Moreno during the close of the council’s Jan. 20 meeting to formally discuss the matter at a future date.

“I want the discussion to be in open session so the council can be there with stakeholders and the public to make a good plan,” Ureña said.

On Jan. 28, Ureña took to social media to advocate for the support of the existing farmworker encampment.

In a seven-minute video posted to his Facebook page, “Concejal Raul Ureña,” the newly elected council member advises the public of how it can support the encampment with monetary and food donations, as well as clothing and camping items such as blankets and mattresses.

One of the proposed encampments would house farmworkers who are either homeless or want to avoid the inconvenience of crossing from Mexicali in the early-morning hours for work, and who often must spend a few hours milling about downtown Calexico as they wait to be transported to work in the region’s agricultural fields.

The second proposed encampment would house unemployed homeless individuals who could also benefit from the amenities and services that the site would make available, Ureña said.

“We are going to lay out a clear vision of two permanent encampments in designated city lots,” he said in his video. “They both have very different needs, and we want to make sure we’re sensitive to that.”

It remained unclear whether a majority of the City Council would be supportive of Ureña’s proposal.

Both Mayor Rosie Fernandez and Council member Camilo Garcia said on Feb. 2 that they were unaware of any such proposal by Ureña to identify and establish new sites for the encampments he is envisioning. Moreno did not immediately respond to a request for comment about the matter.

Neither Fernandez nor Garcia took a position on whether they support Ureña’s proposal.

The existing farmworker encampment was created, without any formal permission, by a local representative of the Coalition for Humane Immigrant Rights on a city-owned parcel that the city had previously considered selling to the federal government to install a secondary border barrier.

The encampment consists of about a dozen tents and is likely to remain in place until the city can formally designate an alternative location for the site, Ureña previously said.

It is situated on the northern side of an unpaved road that is adjacent to the border barrier and which is used by Border Patrol to monitor and patrol the area.

The Border Patrol, which was not consulted about the encampment, indicated that it does not have any plans to force the removal of the cluster of tents since it does not have jurisdiction over the site, the agency’s Public Affairs Office stated.

“The encampment has not presented a security risk or an interruption in Border Patrol operations, but we will continue to assess the situation as we do with all border activity,” stated Agent Anthony Garcia in an email on Jan. 28.

The purpose of the encampment is to provide overnight shelter for farmworkers who live in Mexicali but who wish to avoid prolonged border-crossing times and then milling idly about the city’s streets while awaiting work, said Hugo Castro, Coalition for Humane Immigrant Rights Southern/Baja California region organizer.

Even prior to establishing the encampment, Castro was regularly performing educational outreach, advising farmworkers of their labor and immigration rights. He has also been providing them personal protective equipment during his early-morning efforts in Calexico.

He was moved to establish the encampment after listening to farmworkers repeated complaints about the harried work and living schedules they must adopt to seek work in agricultural fields stateside.

“I didn’t ask for permission,” Castro said, referring to the encampment. “I seen an emergency.”

Since its creation, the encampment has housed one to three farmworkers a night, Castro said. They typically arrive about 7 to 8 p.m., in time to be served a meal and hot chocolate.

Those who use the site are provided with a sleeping bag and blankets, socks, gloves, bottled water, sweatpants, sweatshirt, jacket and hand sanitizer, Castro said. The items were made available by the generous donation of local nonprofits Our Roots Multicultural Center and Comite Civico Del Valle, to name a few.

The coalition has publicized the site’s existence on its Facebook page, “CHIRLA Imperial Valley,” as well as on another popular Facebook group page, “Chisme filero,” that serves as a message board for the region’s farmworkers.

“We are providing essential services for essential workers,” Castro said. “They are the most vulnerable and neglected.”

Calexico police had responded to the site the first night of the camp’s establishment and indicated the department would be available for assistance, if any were needed, said Ureña during a Jan. 28 interview.

“They’re treating it like any other (homeless) encampment in the city,” he said.

Authorities in California and eight other states are prohibited from dismantling homeless encampments on public property if no other shelter is available, following a 2019 U.S. Supreme Court ruling.

Were the proposed transitional housing site to be established, Ureña said he would then turn his attention to addressing the issues related to farmworkers often using the city’s downtown streets and alleys as “open-air restrooms.”

“Once we get them out of the situation of sleeping on the streets and into something they call home, we can finally invest resources to clean downtown and keep it clean,” Ureña said during his Jan. 28 Facebook post.

Currently, there is a portable restroom at the site of the encampment, primarily to serve the construction workers employed at a project at the southwest corner of Andrade Avenue and First Street.

There is also a push underway by the activist group Calexico Union Against Corruption requesting that the city open the public restrooms that were closed in response to COVID-19. Some of those restrooms near the downtown area were frequented by farmworkers as they waited for their workday to start.

The initiative is separate from CHIRLA’s effort and Ureña’s proposal for transitional housing but is part of a larger plan to have the city be more receptive to the needs and concerns of farmworkers, Ureña said.

In a similar vein, City Council member Gloria Romo said on Jan. 28 that she has proposed that the council examine the possibility of having farm-labor contractors establish a shelter for the farmworkers to provide restroom access and respite from the winter and summer’s extreme temperatures while they await transportation to the region’s agricultural fields.

“It can be done,” Romo said. “And it shouldn’t even be debated.”

“Imperial County Community, when are the (United Farm Workers), Imperial County Farm Bureau, Farmers, and Farm Laborer Contractors going to step it up and do something for the workers??? I do NOT believe the City of Calexico and its residents should be paying for this. Our community and City cannot afford an expense like this. The People I mentioned above have a lot of money and get Government Concessions for their businesses. The UFW used to own about 2.5 acres of land where the new US Port of Entry is now. That property had a place for farmworkers to rest, use the restroom, and be picked up. I grew up in Calexico it was called El Hoyo,” Gerardo wrote. 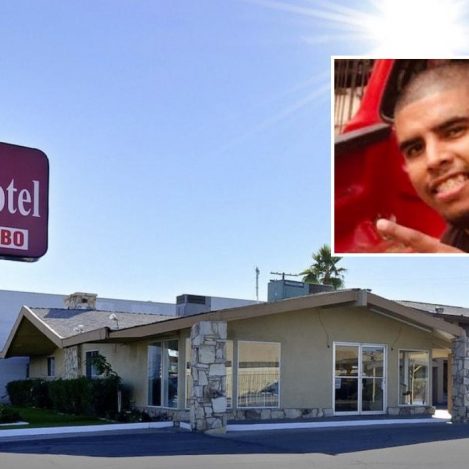