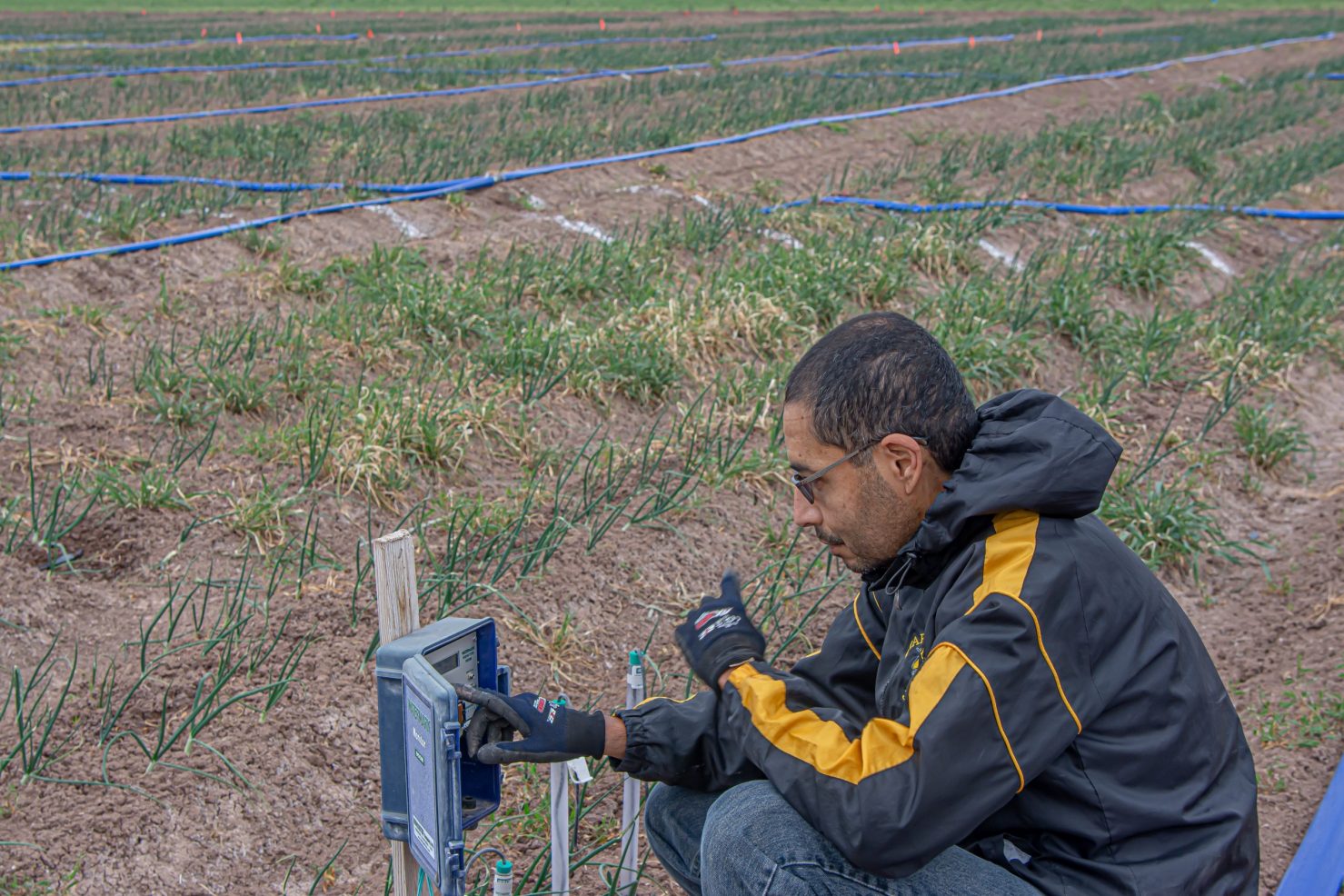 Jairo Diaz checks on the watering system used to measure the amount of water used to irrigate an experimental onion crop at University of California Agriculture and Natural Resources’ Desert Research Extension Center in Holtville. Diaz is director of the center. | CAMILO GARCIA JR. PHOTO
Home
Agriculture
In AgricultureFeatured Stories

HOLTVILLE — Well-kept cows and pesky bugs will be the focus of additional scholarly inquiry at the University of California Agriculture and Natural Resources site in Holtville in the coming years.

The UCANR site has long been on the cutting edge of agricultural and animal science and is looking to bolster those efforts with the recent hiring of two experienced academics.

The site is home to the UC Cooperative Extension (UCCE) and the Desert Research Extension Center (DREC), which acquired a new integrated pest management adviser and a feedlot management specialist, respectively.

Spread across more than 220 acres, the land-grant institution includes tree-lined drives, several office buildings, acreage dedicated to agricultural fields, and a feedlot that can accommodate more than 600 head of cattle.

Starting next month, Apurba Barman will be working onsite at UCCE as an integrated pest management adviser.

Barman was hired Jan. 11, and for the time being has been working remotely from Georgia, where he recently led a whitefly monitoring and management program at the University of Georgia that targeted crop systems in the state’s southern region.

The Valley’s prevalence and abundance of vegetable and cash crops will present additional opportunities for Barman to conduct research on the wide variety of pests that make their home here.

After his arrival, Barman’s first order of business will be getting to better know the local crops and seasons of cultivation.

“I think this is going to be the most exciting area to study in my life,” Barman said. “There will be a steep learning curve.”

Aside from whiteflies, which in 1990 wreaked havoc on local vegetable crops, Barman has done extensive research as well on insect pests that thrive on cotton.

While in Texas, he worked with the Texas A&M AgriLife Extension Service as a cotton extension entomologist and developed a research program to understand the extent of damage and management of thrips in the state’s High Plains region.

A particular interest of Barman’s will be how insects impact local high-value crops, which can tolerate less insect-related damage in comparison to crops deemed of lower value, he said.

“With my knowledge I can help farmers understand the severity and intensity of insects and how we can manage them,” he said. “The knowledge of insects in vegetables is going to be helpful when I start new research projects there.”

As the center’s integrated pest management adviser, Barman is joining a powerhouse of an institution whose prestige and research has worldwide reach. Barman said he found the job just as appealing for its location in the Valley, whose prevalence and abundance of vegetable and cash crops have earned it a global reputation, as well.

“I was lucky to find this opportunity,” he said. “It’s an absolute honor to be in the Imperial Valley.”

Pest management is an utmost concern in the Valley, whose shared borders with Arizona and Mexico bring with it added concern about migrating invasive pests, weed species and plant pathogens, said Oli Bachie, UCCE director.

As such, Barman will be working in the diverse disciplines of pest management, plant disease-causing organisms and weed management.

“We will be dealing with three enemies at the same time with the same person,” Bachie said, referring to Barman.

The integrated pest management adviser position had been vacant since the 2017 retirement of former UCCE entomology adviser Eric Natwick.

Barman’s hiring was partly funded by the county Board of Supervisors, which in November approved the expenditure of a total of $385,000 from its Agricultural Benefit Program over the next five years to help pay for the position. The University of California system is paying the other half of Barman’s compensation.

“For now, it is safe to say it is a five-year program,” said Bachie, the local UCCE’s agronomy adviser, in charge of soil management and crop production research and extension.

With the county having recently emerged as a prime location for industrial hemp cultivation, research opportunities have arisen for that crop as well. Though expensive, Bachie said such hemp research will help determine which varieties are performing well in the low desert, and how best to manage pests and pesticides.

“The incoming adviser is expected to work on this as well,” Bachie said, referring to Barman.

Despite the high stakes of the job, and the notoriety of the Valley’s summer temps, Barman said he is content with his decision to become the center’s next integrated pest management adviser.

“As long as there are crops and insects I will survive,” he said.

In 2019, field crops in the Valley grossed $498 million, while vegetables and melon crops combined for $799 million in gross value, according to the 2019 Imperial County Agricultural Crop & Livestock Report.

As impressive as those crop figures are, cattle remained atop the county’s 2019 top-10 list of gross values for individual commodities, at $522 million, the ag report stated.

With more than 386,000 head of cattle, the county ranked second in California for cattle and calf production, accounting for 13.5 percent of the state’s overall production in 2019, according to the ag report.

The significance of those figures is also reflected by the recent hiring of Pedro Carvalho as feedlot management specialist at UCANR’s Desert Research Extension Center in Holtville. The position is newly created and statewide in scope, said DREC Director Jairo Diaz.

Because of its capacity to accommodate more than 600 head, the DREC feedlot is one of the largest cattle research facilities in the United States, Carvalho said. In the coming weeks, some 220 calves will arrive at the feedlot, to conduct further research into beef production and nutrition.

“For a research center, it’s a pretty good number,” Carvalho said, referring to the Holstein calves the center will soon house.

A native of Brazil, Carvalho said the local extension center is well known around the world, and especially in his home country, further adding to the appeal of his new role.

His choice of careers should hardly be surprising. Carvalho had grown up on his family’s cattle and crop farm in the state of Goiás in Brazil. His father and grandfather were both animal scientists. As a result, being employed in the cattle industry was something that Carvalho said he had always envisioned.

Animal science has long been Carvalho’s field of study, and he has earned three degrees in that discipline.

An undergraduate of the Federal University of Mato Grosso do Sul in Brazil, Carvalho then went on to earn his master’s degree from the University of Illinois at Urbana-Champaign and a doctoral degree from Pennsylvania State University, where he conducted research projects to enhance the efficiency of Holstein steers in the feedlot.

Carvalho’s past research extends to the use of hormone implant technology in cattle, as well. Those findings have shown a subsequent negligible presence of hormones in the steer, as well as increased weight gains of 20 percent and an 11 percent rise in carcass production, which refers to the dressed meat that is sold to consumers.

Going forward, Carvalho said his focus will be to research and demonstrate which feedlot management practices are improving the quality or efficiency of beef production. He also wants to examine practices that could potentially help feedlot workers’ health and safety.

“That’s the main goal of our center right now,” he said. “We like to provide science-based information.”

In contrast to what private sector employment would likely have entailed, Carvalho’s current position comes with the added responsibilities of communicating regularly with statewide extension center personnel, representatives of the local and statewide cattle industry as well as the general public.

“I believe that gives me more freedom to do what I want to do,” he said.

One of Carvalho’s future goals is to increase the number of DREC’s onsite cattle to help expand research opportunities. Doing so will require additional student interns and workers to handle the larger number of cattle.

He said he’s hoping to boost the extension center’s pool of interns by encouraging local students to apply, as well as maintaining the close relationship it has with Mexico, from where many past interns have hailed. His plans also call for expanding internship opportunities to Central and South American countries, too.

Since having arrived, Carvalho said he has adapted smoothly to life in the Valley and was particularly pleased to find a staple of his home country, picanha steak (a specific cut of beef), at Ramey’s Meats in Brawley on one occasion.

“It was actually awesome,” the 31-year-old said.

The Mission of the Extension

Technically, Carvalho is an employee of UC Davis’s department of animal science, though he is assigned to the DREC in Holtville, from where he can assist feedlot advisors throughout the state, said Diaz, the DREC director.

In the three years that Latack has been with the UC Extension Center, stakeholders have been requesting a feedlot management specialist to assist with matters related to the industry, she said.

As an adviser, Latack has regular contact with cattle ranchers in the region to address specific needs. With Carvalho now aboard, she said she can act as a go-between to share his expertise with industry stakeholders.

“It truly benefits an area where the advisers are in,” Latack said.

Even before Carvalho’s arrival, cattle research had been ongoing at the extension center, thanks largely to the efforts of Richard Zinn, a renown UC Davis animal science professor.

Aside from presenting its research for scientific review, the mission of the extension center requires it to be able to share its findings to industry stakeholders and the general public in layman’s terms. The ability to do so is the very definition of “extension,” Diaz said.

“All the research that we conduct is applied research,” Diaz said. “And at the end of the day, we want that research to be available to the public.”

Indeed, despite the restrictions in place because of COVID-19, both UCCE and DREC continue to fulfill their missions and have hosted virtual workshops and seminars for stakeholders.

“We only shifted the mechanism by which we extend our services to our clients,” said Bachie, UCCE director.

More information about upcoming online events can be found at the respective websites of the UCCE, http://ceimperial.ucanr.edu/ and the DREC, http://drec.ucanr.edu/ 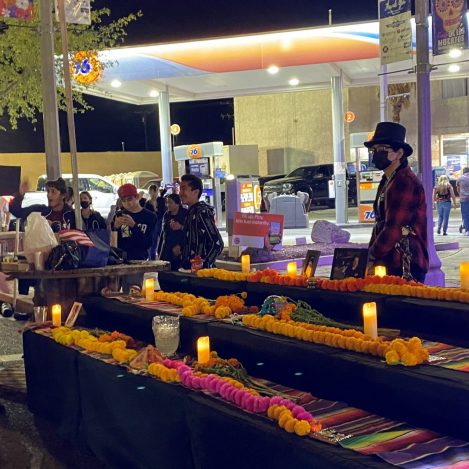