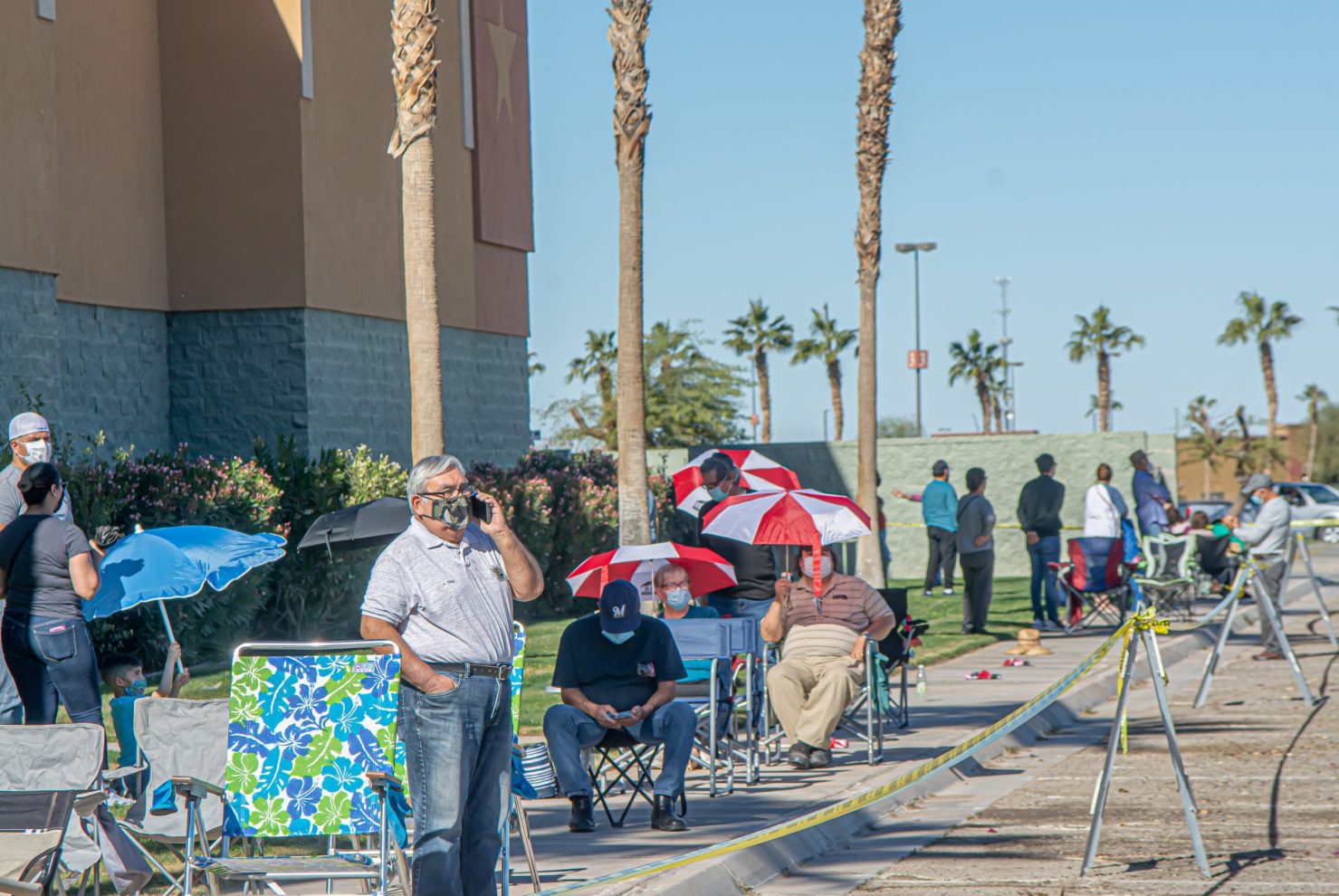 Several hundred people, many of them senior citizens, and some their children or younger relatives serving as stand-ins, waited in lines that increased in length by the hour Sunday, Jan. 17, in anticipation of the first COVID vaccine clinic for the more than 26,000 people age 65 and older who have now been thrust to the top of the priority list.

Although county Public Health Department officials said 2,000 more doses of the already scarce supply of vaccine specifically earmarked for Imperial County’s senior population were due to be delivered any time within the next several days, just 1,000 doses will be available between El Centro and Brawley when the clinics begin giving shots early Monday morning, Jan. 18.

As of 9:30 p.m. Sunday, the crowds outside the Imperial Valley Mall, the site of El Centro Regional Medical Center’s mass vaccination event, had grown to what El Centro Mayor Pro Tem Tomas Oliva estimated to be in upward of 600 people, with more still arriving, he said during a brief conversation with the Calexico Chronicle.

Echoing the sentiment widely shared over social media since many seniors, or their stand-ins, started arriving on site before noon, Oliva said he was angered over the organization and execution of El Centro Regional’s vaccination clinic.

“It’s ridiculous out here,” Oliva said. “There’s no excuse for this.”

As temperatures continued to drop late Sunday night, El Centro firefighters were onsite handing out hot coffee, and reportedly, others have begun to arrive with food donations. Oliva said he showed up around 6:30 p.m. dressed for the balmy temperatures experienced when many arrived at the height of the day’s heat, so he can imagine how some of those gathered must be feeling: “I’m getting cold out here,” he said.

Making the rounds at the mall with fellow council member Martha Cardenas-Singh, Oliva said he had not seen any officials from El Centro Regional Medical Center around to “figure this mess out.” He said he tried to get the attention of a hospital staff member inside the food court area, where the clinic will take place, but no other high-level officials were present.

The first-term council member said he plans to bring up and discuss what transpired Sunday in open session during the upcoming El Centro City Council meeting on Tuesday, Jan. 19. Although El Centro Regional is a city-owned hospital, it does not answer to the city per se; rather, members of the council sit on the hospital’s governing board along with several other community members.

Oliva said city officials, including himself, the fire chief, the city manager, and others, had offered a number of suggestions to ECRMC administration regarding how to conduct the mass vaccination clinic, but “all answers were no,” he said.

During a separate interview on Saturday, Jan. 16, Imperial County Supervisor Jesus Escobar said Public Health officials, who have been through mass vaccination events before, offered to assist both ECRMC and Pioneers Memorial Healthcare District, with some best practices and “lessons learned.”

Escobar said there were no takers.

Oliva agreed that to that end county Public Health would have been a valuable resource. “This isn’t their first rodeo,” he said, referring to Public Health’s successful campaign to vaccinate thousands in Imperial County against the H1N1 virus, or swine flu, in 2009.

“Granted, they had all the vaccine,” he said, “but they’ve done this before.”

On the city of El Centro’s end, Oliva said the suggestions were made to have hospital staff register people who showed up, so when or if the numbers reached 600, everybody could be told to go home.

Oliva said he could imagine more and more people showing up Sunday night and into early Monday morning, and once ECRMC starts distributing tickets at 6 a.m. Jan. 18, many of those people will have to be sent home, he guesses.

Meanwhile in Brawley, those trying to save their spot in line for one of just 300 doses of vaccine, have parked their cars in a line outside the entrance to the Gateway Church parking lot — the site of Pioneers’ clinic — on the corner of Highway 86 and Legion Road, and simply left.

Earlier in the day Sunday, Pioneers spokesperson Karina Lopez said those parked outside could be let into the parking lot as early as 2 a.m. Monday, but registration and tickets won’t be distributed until 5 a.m. Vaccinations are scheduled to get underway at 7 a.m., she said.

Jose Luis Olmedo, a Brawley resident, executive director of Comite Civico Del Valle, and a member of county and state vaccine advisory committees, had been monitoring the situation in Brawley most of Sunday.

“Since Saturday, concerns among senior advocates started pouring in. I made these known to Imperial County (Public) Health and also reached out to Pioneers Memorial Healthcare District. I, along with other advocates, raised concerns, and we are pleased how PMHD promptly responded by working on the logistics and informing everyone in their vehicle making line,” Olmedo said on Sunday night. “Glad to see empty vehicles and both city of Brawley and PMHD accommodating vehicles to take the place of people.”

“What’s most important is keeping the vulnerable population, 65-plus, safe with humane conditions,” Olmedo added.

Meanwhile, public reaction to Sunday’s events have been harsh, but that wasn’t unexpected. When details of the two clinics were released to the public by the hospital’s late Friday afternoon, Jan. 15, via social media many were skeptical and critical, both from personal perspectives and as the senior advocates Olmedo mentioned.

“Nine hundred vaccines on a first-come, first-served basis appears to be a survival-of-the-fittest approach. Most senior citizens have primary-care physicians. Were they included in the decision-making process? What about reasonable accommodation for the elderly, frail, and disabled? We can and must do better,” said Brawley resident John Hernandez on Friday night. Hernandez, a former state senior citizens’ representative, now sits on the Imperial County Area Agency on Aging board.

El Centro resident Joy Ceasar, a local education administrator with two retired educator parents over 65, found the set-up troubling as soon as it was made public Friday. She posted to social media later that night.

“Does anyone else have an issue with … setting up COVID-19 vaccines for the most fragile age group at a first-come, first-served event? 600 people over 65 in a large group … during a stay-at home order? And the one in El Centro requires you have to stand in line. Does anyone else think this is a horrible, dangerous idea?” Ceasar wrote.

Social media, all around, from Friday night through late Sunday, has been alight with commentary over the state of the two clinics, with the reactions overwhelmingly negative. Most of the criticism has been cast toward the idea that so many of what are considered the most vulnerable among us are the ones being forced into cattle-like conditions.

“It is sad that in ‘the greatest country in the world’ our nation’s most vulnerable citizens have to wait in Black Friday-style lines to receive a vaccine that can spare their lives. Bureaucratic red tape and politics have had dire negative implications in the distribution process,” Noemi Esquer posted to the Calexico Chronicle’s Facebook page.

“This is so wrong! How about the elderly that can’t stand in line for any amount of time. Elderly who can’t spend the night because they are ‘the elderly.’ It’s ridiculous and poorly managed,” wrote Lupe Hamilton.

Earlier in the day Jan. 17, when the mercury had topped 85 degrees, many began to fear that the heat would overcome some of the seniors arriving at the mall.

“How sad. So badly managed. Why not have them set an (appointment) instead of having them do this with 80-plus degrees. Angry,” posted Torres GL to the Chronicle’s page.

Calexico Chronicle staff arrived at the mall just after 1 p.m. to photograph the early arrivals and talk to some of those waiting in line. One person was interviewed before a journalist was asked to leave by a member of El Centro Regional’s staff, citing federal privacy regulations.

Before the journalist was asked to leave, Imperial resident Juve Obeso stepped aside to chat.

“I feel that people really wanted this vaccine already, so yeah, they’re going to do whatever it takes in order to get the vaccine, so they’re willing to wait under these conditions,” Obeso said, referring to the unseasonably warm weather that reached around 85 degrees.

Obeso, who had arrived only a half hour before being interviewed, was still upbeat about what was going on.

“It feels great that the vaccine is finally coming to our people,” said Obeso, who had arrived to stand in line for his senior citizen father-in-law. “We’re trying to help him out and make the line for him in order to get the vaccine in the morning.” 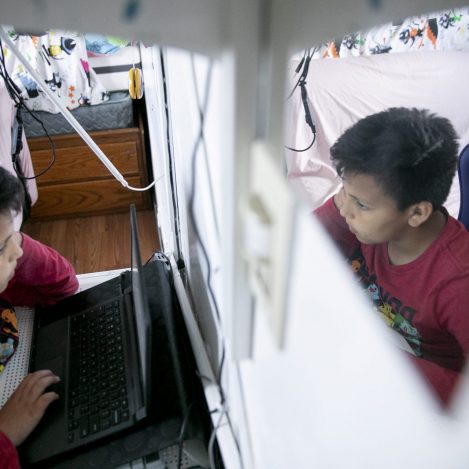