A photo rendering shows what the Species Conservation Habitat project that began construction at the southern end of the Salton Sea near the New River will look like when complete. Work got underway this week to clear brush and vegetation from the area that will eventually be an important fish and bird habitat and suppress dust emissions to improve regional air quality as the sea recedes. | COURTESY IMAGE
Home
Regional News
In Regional News

SALTON SEA — Construction has started on the state’s first large-scale project to create habitat and reduce exposed lakebed at the Salton Sea.

The Species Conservation Habitat project, located at the southern end of the sea on both sides of the New River, will create a network of ponds and wetlands to provide important fish and bird habitat and suppress dust emissions to improve regional air quality as the sea recedes, according to a press release from the state. The project will cover about 4,110 acres, an increase from the original 3,770-acre estimate due to an updated design.

Construction is expected to continue through the end of 2023.

“Beginning actual construction on this large project represents important progress,” California Secretary for Natural Resources Wade Crowfoot said in a statement. “It is only possible thanks to strong coordination with our local, state, and federal partners, including Imperial Irrigation District, Imperial County, the Imperial County Air Pollution Control District, the Colorado River Regional Water Quality Control Board, the U.S. Army Corps of Engineers, and the U.S. Fish and Wildlife Service.

“Obviously, much more work lies ahead,” he continued. “We need to continue to deliver projects on the ground that improve conditions at the Salton Sea for residents as well as for wildlife.”

The habitat project anchors phase one of the state’s Salton Sea Management Program, which centers on constructing wetlands and other projects to limit exposed lakebed, reduce airborne dust and restore environmental habitat on 30,000 acres around the Salton Sea. The habitat project is a $206.5 million investment in Imperial County that will create as many as 3,000 jobs, according to state officials.

Though the construction site is not open to the public due to COVID-19 restrictions, the state team will share images of the project as construction continues on the state’s Salton Sea Management Program website: https://saltonsea.ca.gov/program/ 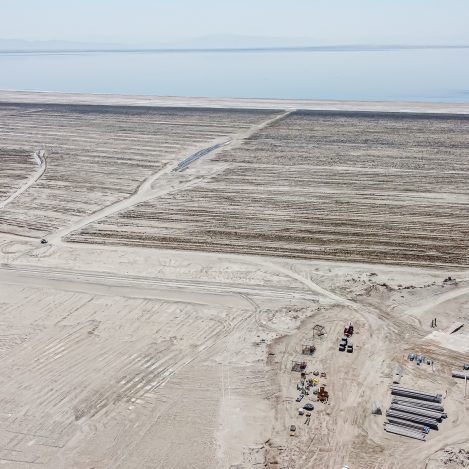