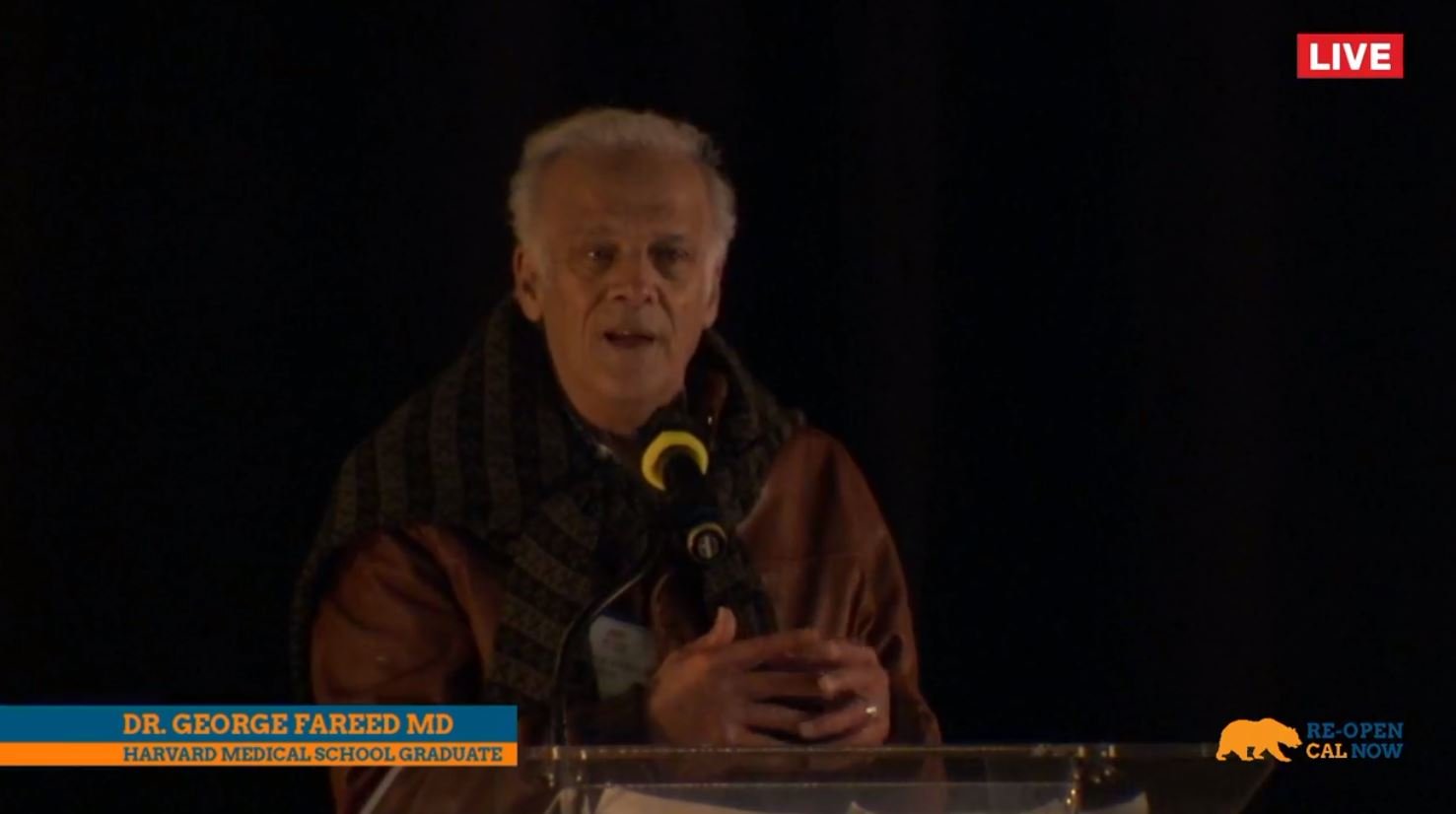 Dr. George Fareed, who has been practicing family medicine in Brawley for more than 30 years, speaks during the Re-Open California Now conference in Sacramento on Saturday, Jan. 9. | SCREEN CAPTURE IMAGE
Home
COVID-19
In COVID-19Regional News

SACRAMENTO — Dr. George C. Fareed has been practicing family medicine in the Imperial Valley for more than 30 years, and over the weekend the physician was one of several healthcare experts taking part in the Re-Open California Now public policy convention in the gated Sacramento neighborhood of Rancho Murieta.

Speakers from the medical field were joined by state law enforcement officials and economic experts arguing that the California economy should be reopened immediately despite record numbers of COVID-19 deaths and hospitalizations.

The event ran from Friday, Jan. 8, through Sunday, Jan. 10, with the bulk of the discussion occurring during sessions on Saturday, Jan. 9, when Fareed, director of the Pioneers Health Center in Brawley and a Pioneers Memorial Healthcare District hospitalist, was part of a panel discussion.

Many of the views shared at the conference are considered controversial and outside the mainstream. The event was webcast over Re-Open California Now’s Facebook page.

Fareed, who has gained national exposure during the pandemic for his advocacy on early COVID interventions, such as the widespread use of a hydroxychloroquine cocktail, was included in a Q&A session focusing on the science behind COVID-19 and possible treatments for the virus.

Fareed spoke alongside University of California Los Angeles’ Dr. Joe Ladapo, entrepreneur Steve Kirsch, and Dr. Jay Bhattacharya, one of the authors of the Great Barrington Declaration, a statement drafted by the American Institute for Economic Research, a free-market think tank in Great Barrington, Mass. The statement calls for the re-opening of the national economy and for those who are not at a significant risk of dying from COVID-19 to resume their normal daily lives and for those who are at risk to be intensely shielded from the virus. The statement posits that a high transmission rate among lower-risk individuals would lead to “herd immunity” for those at higher risk.

The World Health Organization, along with dozens of other national health organizations, has refuted the claims made in the statement and said that the herd immunity component alone would be undermined by the limited post-infection immunity period and that it would be impossible to shield all of those who are vulnerable from contracting the virus. In a published interview, infectious disease specialist Dr. Anthony Fauci called the plan “nonsense and very dangerous.”

Fareed and Bhattacharya both called for the early treatment of COVID-19 using cocktails of drugs that have not yet been widely accepted by the larger medical community as effective against the virus, including HCQ and the antidepressant fluvoxamine. They also spoke of monoclonal antibodies, two therapies of which were recently awarded U.S. Food and Drug Administration emergency-use authorization.

“The monoclonal antibodies are excellent therapeutics, and if they could be given early and with convalescent plasma (another antibody treatment), if it’s given in the early window, within the first three days of the onset of symptoms, there is definite benefit,” Fareed said, adding that he believes the use of the experimental treatment should be more widespread in urgent-care centers and clinical settings.

“But they will be expensive,” Fareed said. “I don’t know what their price is. I’ve asked about it, but nobody has given me an answer.”

For now, the FDA-authorized monoclonal antibody treatments are only being administered through hospitals, but to outpatients within 10 days of COVID diagnosis.

With early-intervention medications and experimental treatments, Fareed claimed there has been efforts to suppress knowledge and distribution of these therapies during the COVID crisis.

“For me, the worst thing has been this suppression of early treatment and the consideration of a number of agents that can suppress the early viral replication and allow the at-risk individuals not to be hospitalized and die,” he said. “As they become available, they should be tested thoroughly and combined and used, and they should have been offered from the get-go and should not have been stigmatized.”

Fareed said that he has received some backlash for suggesting that these drugs should be used, but that he has “ignored totally any reaction against me.” He said that he had been “picked upon” by Imperial County Health Department officials for using HCQ to treat nursing-home patients during an outbreak at Imperial Heights Healthcare and Wellness Centre in Brawley during the summer. He added that had he known about it, he also would have used fluvoxamine as part of the treatments.

“I’ve felt (backlash) by people in the community, or doctors even who have not wanted to do anything, that have accepted this ‘don’t do anything’ approach, and ‘you’re going to do more harm if anything,’ and I’ve just ignored it,” Fareed said.

“And I’m isolated in a rural area on my own, and I’ve seen the truth. I’ve seen the patients improve and the expressions, and maybe the fluvoxamine is going to be even faster in achieving that. Whatever it is, I will use it,” he added.

Bhattacharya called for open communication on the subject and said that he regrets the way that Fareed has been treated.

“I really regret that you’ve been attacked in the way that you have,” he said. “It is a failure of our professional responsibility if we don’t say what we see. What I’ve learned from the Great Barrington Declaration is that there are a lot of people that think like we do, they’re just cowed into silence because they don’t want to face the press attacking you, misrepresenting you, accusing you of things you don’t believe, which has all happened to me. But there’s no other choice — we have to speak up. Millions of lives are at stake here.”

During another panel discussion at the conference, a trio of sheriffs from Sacramento, Riverside and El Dorado counties, all elected positions, spoke about their roles during the pandemic, saying they have refused orders to enforce the lockdown and have questioned the legality of Gov. Gavin Newsom’s lockdown orders.

The panelists also implied calls for inmates to be released from jails and prisons riddled with COVID-19 are a liberal conspiracy.

Host and moderator of the segment, former Sacramento County Sheriff John McGinness, who is now a radio personality, brought up the topic of prisoner releases.

“I’ve heard calls for release from the institutions, inmates, for their own wellbeing, as if there’s no threat to them from the outside and all of the threat of exposure to the pandemic exist within the walls of jails and prisons,” McGinness said. “I find that to be interesting.”

More than 10,000 prisoners have been released from state prisons and jails since the pandemic began in March, a move that has garnered praise and criticism. Advocates for early release have pointed out that most of the inmates are older and at-risk due to pre-existing health conditions, but critics contend that many of them are violent criminals who pose a danger to the public. In December, Orange County Superior Court Judge Peter Wilson ruled that county jails must reduce their jail populations by half after the threat of a lawsuit from the American Civil Liberties Union. The ACLU alleged that full jails are a violation of the constitution and of disability rights laws.

“This push to un-incarcerate people, to get people out of jails and prisons, started long before this pandemic,” Jones said. “And unfortunately for all of us, this pandemic happened during a particularly difficult presidential year, so it quickly, like everything else, including law enforcement, became weaponized for that purpose. … There’s been tens of thousands of people released from jails and prisons across this state long before the pandemic started and certainly thousands released since using the excuse of the pandemic.”

Jones said that while strict COVID-19 measures kept infections at bay in the early months of the pandemic, they did eventually hit hard at Sacramento County penal institutions.

“In the interest of full transparency, we have a bit of an outbreak going on right now that we are containing, but the first few months we didn’t, so it just made ironic all of these calls (to release prisoners),” he said.

Early in the pandemic when his county’s inmate population had close to zero cases, the infection rate in the larger community would have been significantly higher, Jones pointed out.

“We don’t know what the transmission rate was in the community, but we know there was one, and so to justify this by saying that it’s safer for the incarcerated folks to be outside of the jail in the community was simply a lie.”

With the loss of sales tax revenue caused by the economic shutdown, El Dorado County Sheriff John D’Agostini, another panelist, expressed concern about funding for public safety, which he said is paid almost exclusively out of non-dedicated general funds that are at the discretion of elected leaders.

“Without (sales tax revenues), we could see significant shortfalls,” D’Agostini said. “And then again, compound that with the defund police (movement) and with the ‘other things are more important than public safety’ mindset and we’re very, very concerned.”

Justin Adams, who holds a Ph.D. in economics and public policy from Stanford University, joined John Kabateck from the National Federation of Independent Businesses for a discussion on the economic impacts of the COVID-19 shutdowns during the final day of the convention on Jan. 10.

During his 30-minute presentation, Adams, who is president and chief economist of economics research and analysis firm, Encina Advisors, painted two different pictures of the California economy under the COVID-19 shutdowns: One of big businesses taking everything in stride and even showing growth, and one of small businesses and certain sectors barely hanging on, if they haven’t closed their doors already.

During the second quarter of 2020, Adams said the economy plunged to negative-31 percent growth but then had an “unprecedented recovery” and was back up to 33 percent positive growth by the end of the year. Likewise, unemployment numbers showed a strong, if not complete, turnaround with the number of unemployed workers sitting around 8.2 percent in December, down from a high of 16.2 percent at the end of the first quarter of 2020.

Other economic indicators, such as home prices, home sales, new business creation, and growth of sales-tax revenue also all showed positive gains at the end of the year.

But Adams said the numbers do not represent the entire reality of what is happening to small businesses.

Under the lockdown, Adams said that at least 32 percent of the businesses that were operating before the pandemic are no longer operating and that number is near 50 percent for the leisure and hospitality industries. He said that 6.3 percent of small businesses still operating in the state expect to be permanently closed within the next six months.

With state tax revenues soaring and projections for future revenues looking good, Adams said that state policymakers have no motivation to reopen the economy.

“Basically, we have $33.9 billion more than they thought they would have when they passed the budget in July,” he said. “We actually have a billion dollars more than what projections were telling us pre-pandemic. So, we’re flush with cash … I think that’s why you’re not seeing policymakers sort of panic and scream at the top of their lungs that we need to reopen.”

Adams expressed concerns about the crash of the small-business economy eventually spilling over into the larger economy and having a devastating effect on California tax revenues. Uncertainty, he said, is the most daunting factor.

“We have a ton of uncertainty,” he said. “No one knows when the pandemic will end. … We’ve seen that mandated shutdowns have worsened the severity of California’s economic outcome. The question is, can we influence state policy makers to sort of change direction?” 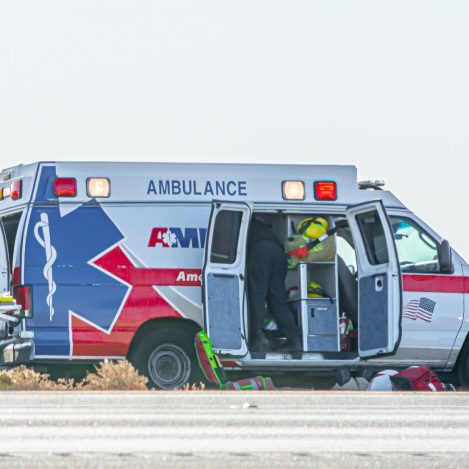