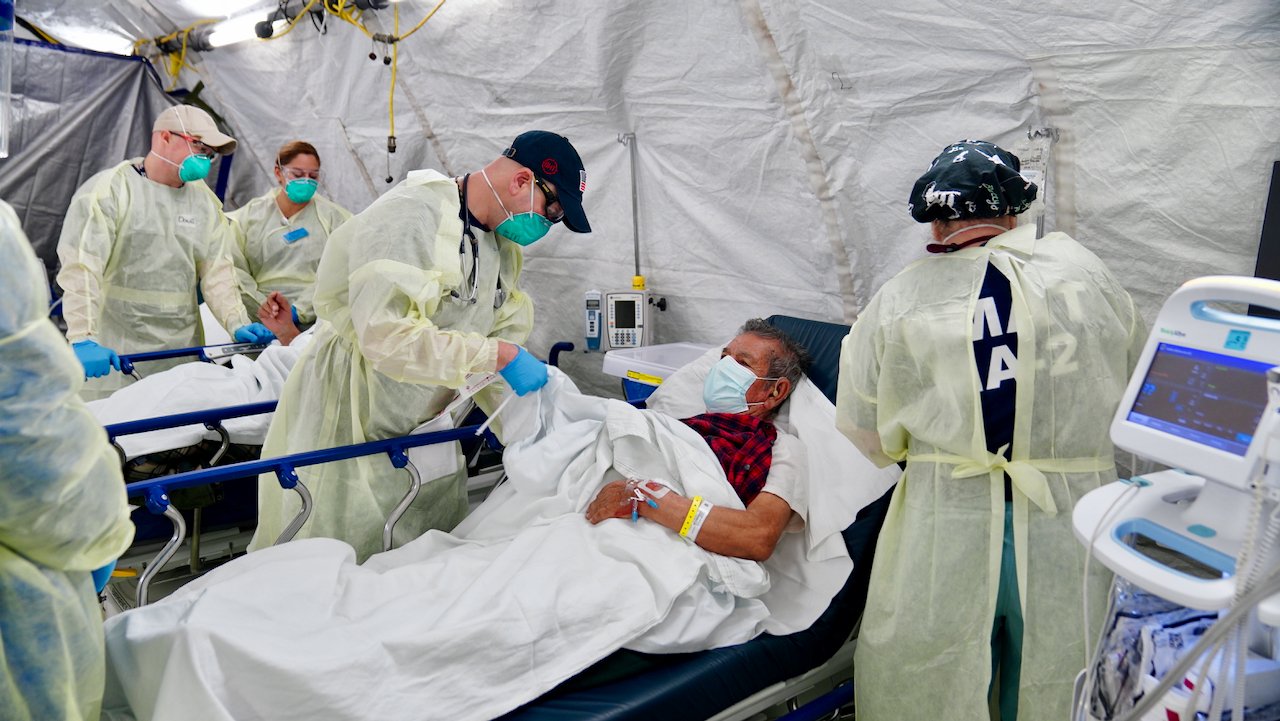 National Disaster Medical System team members administer monoclonal antibody treatments to a COVID-positive patient inside the Imperial County Infusion Center at El Centro Regional Medical Center recently. The infusion center, which is the first of its kind in the nation, was set up Dec. 30 to treat COVID patients within the first 10 days of their diagnosis in an attempt to keep them from becoming hospitalized. | PHOTO COURTESY OF DEPARTMENT OF HEALTH AND HUMAN SERVICES
Home
COVID-19
In COVID-19Regional News

As seriously ill COVID patients continue to inundate local healthcare facilities, a first-of-its-kind federal program administering antibody treatments is meant to keep the newly diagnosed from progressing to hospitalization and lessen the burden on an overtaxed system.

A U.S. Department of Health and Human Services team of medical professionals started treating COVID-19-positive patients with new monoclonal antibody drugs in a tent outside El Centro Regional Medical Center on Dec. 30, according to a federal spokesperson.

So far, 35 local high-risk patients within 10 days of their initial COVID-positive diagnoses had received treatment inside the tent as of Monday, Jan. 4, said Peter Cassell, a spokesperson for the HHS’ Department of the Assistant Secretary for Preparedness and Response.

“Our hope is that we will prevent individuals from having to be hospitalized, therefore decompressing the hospitals once they receive these (antibodies),” said Gina Smith, a registered nurse and commander of the National Disaster Medical System team operating what is being referred to as an infusion center. Smith also works under special projects with Operation Warp Speed’s therapeutic arm, which had a hand in aiding the development of the two monoclonal antibody treatments being used in the ECRMC pilot project.

The federal program, which is the first and only in the nation, Cassell said, comes as the cumulative intensive-care unit capacity in Southern California remains at zero percent for what has been about two straight weeks. Infusion centers in Las Vegas and Tucson, Ariz., were to open sometime this week, he added.

As a result, Imperial County will remain under the state’s restrictive stay-at-home order, which was set to expire for the entire 11-county Southern California Region on Monday, Dec. 28. However, the order will not be lifted until a four-week projection shows cumulative ICU capacity above 15 percent.

Although the number of COVID patients and total admissions at El Centro Regional has been coming down slightly over the past week, the total patient census numbers in El Centro and Pioneers Memorial Hospital in Brawley are at historic levels for both facilities. As of Thursday, there were 105 COVID patients of 155 total in ECRMC and 62 confirmed COVID cases of 91 total admissions in Pioneers.

Local Public Health officials foresee those figures starting to rise again anywhere from a week to 14 days after Christmas, and again, following the New Year holidays due to small gatherings of extended families and friends. What was essentially a mini-crest in positive cases and hospitalizations came around the 14-day window immediately following Thanksgiving, a fact that was partly confirmed last week when Public Health data showed that on Dec. 10 there were 453 positive COVID cases recorded. That date was exactly 14 days after Thanksgiving, Nov. 26.

The announcement of the infusion center came during a press conference Wednesday morning, where hospital and federal officials spoke in front of the comparatively smaller light brown tent set up just outside the Emergency Department. The eight-bed tent is expected to treat 28 to 30 patients a day once at maximum capacity and will operate from 9 a.m. to 7 p.m. seven days a week, federal spokesperson Cassell said Thursday.

As media gathered to hear about the facility and the relatively new treatment just after 10 a.m., Cassell said there was already one person inside the tent receiving an intravenous infusion of one of the two monoclonal antibody drugs being offered in the center.

“Although vaccines are lifesaving and very, very important — and we’re glad they’re here — they take months and months to really have an impact on a city, a region, and on the country. We’re here to talk about a therapy from two different companies … that attack and neutralize the COVID virus in patients,” said intensive care physician Dr. Michael Anderson, a consultant and senior advisor to HHS Assistant Secretary for Preparedness and Response Dr. Robert Kadlec.

Monoclonal antibodies are laboratory-made proteins that mimic the immune system’s ability to fight off harmful pathogens such as viruses, according to information from the FDA.

Anderson said the FDA’s emergency authorization is for use in high-risk patients only with 10 days of their diagnosis, and he added the therapeutics are the only FDA-approved drugs for intervention before the point of hospitalization.

“It’s going to help us fight the battle here in our community that has been decimated,” El Centro Regional Chief Executive Officer Dr. Adolphe Edward said during the Dec. 30 press conference. “We are so happy to join hands with the Department of Health and Human Services to actually provide that to our community.”

In a prepared statement, HHS Assistant Secretary for Preparedness and Response Dr. Robert Kadlec said the treatments being offered at the infusion center “can keep people from becoming so sick that they need to be hospitalized, which will help reduce the stress on the hospital, particularly the ICU, and help save lives.”

Among a more detailed range of criteria available from medical providers, HHS’ Dr. Anderson said during the press conference that the two primary high-risk groups to be served will be those ages 65 and over, or those ages 55 and over with a co-morbidity such as hypertension, emphysema, or “some major pulmonary disease,” or the immunocompromised, he said.

There are also cases in which those between the ages of 12 and 17 who have conditions like sickle cell anemia, a congenital heart disease, or significant neurological impairment would qualify.

Cassell said a more robust list of those who qualify for the treatments would be available upon check-in, which must be done through ECRMC’s Emergency Department.

Gina Smith described the treatment process as taking about two and half hours. The infusion takes a little more than an hour, but patients are asked to wait in the infusion center for at least another hour so attending medics, nurses, or a safety officer can monitor the patient for any adverse reactions.

The 10-member National Disaster Medical System team will be on site to operate the infusion center through at least Saturday, Jan. 9, but could stay longer, Cassell said. He added the plan, for now, is to leave the infrastructure in place after the team is gone and hand off its operation to El Centro Regional staff.

Cassell said El Centro Regional was the first site in the country chosen for an infusion center because of the prior relationship the hospital had with National Disaster Medical System personnel, who were already on site helping staff the expanded tent facilities at the hospital campus. 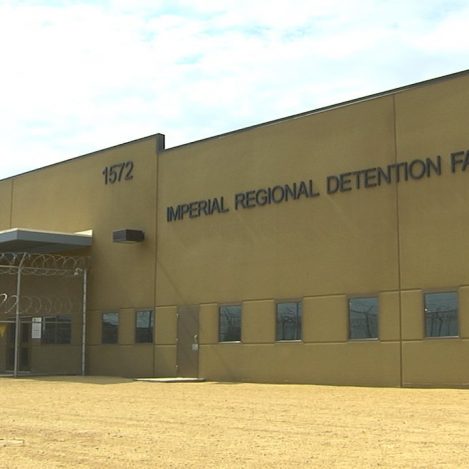