Calexico City Council members Raul Ureña (left) and Gloria Romo discuss a proposal the pair pushed at the Dec. 23 special meeting of the City Council to amend the municipal code to allow for meetings to be conducted in English and Spanish. The proposal was voted down by the council 3-2, with Ureña and Romo coming up short. | SCREEN CAPTURE IMAGES
Home
Local News
In Local News

CALEXICO — The reality is that a failed proposal to change a single sentence in the city’s government code on the language Calexico City Council meetings can be conducted in seemed to portend to much more, among members of the council and the public.

Discourse in Calexico council chambers has flowed between English and Spanish for decades, with residents, business owners, and even some council members, speaking entirely in Spanish during meetings.

And for years, translation services both ways had been provided prior to the pandemic closing off access to chambers and in-person attendance of meetings.

Yet the issue seemed to spark a perception that this new council, and specifically freshman council members Raul Ureña and Gloria Romo, were trying to ensure that future meetings would be conducted in Spanish. At least that was some of intimation made during public comments from some members of the community.

The issue came up during a special meeting on Dec. 23, and ultimately, the proposed change failed to find favor, when it was voted down 3-2. Calexico Mayor Rosie Fernandez and council members Javier Moreno and Camilo Garcia opposed the change.

Ureña and Romo had asked at the Dec. 16 council meeting that the council consider amending the municipal code to state that meetings could be conducted in English and Spanish with translation services available. The council members worked with the city attorney to address the change.

Before the council on Dec. 23 was the first reading of an ordinance that sought to change one line, Ureña explained.

“We are not proposing Spanish-only meetings. There are a total of three words that will be changed in the current code,” he said.

Section 2.04.180 of the municipal code now reads: “City council meetings shall be conducted in English. The city will provide translation services to members of the public at all regular, special, and adjourned regular council meetings.”

The proposed change was: “City council meetings may be conducted in English and Spanish. …”

Ureña and Romo, with the backing of City Attorney Carlos Campos, basically reasoned that what was being proposed is already occurring at meetings and has for many years, and the change simply “codifies,” or makes official through amending the code, what is a current practice.

“Most of the population speaks and understand in Spanish in Calexico. It is the city in the county where Spanish is most spoken. That’s it,” Romo said, adding that it’s necessary that all meetings be allowed to be conducted in both languages with translation services.

Campos said the change simply would have aligned the code and made it consistent with current practices.

Council members Moreno and Garcia argued that if it is already occurring, why make a needless change.

“If it’s not broken, why fix it?” Garcia asked, after asking Campos whether the city was already in compliance with any existing laws, federal or state, regarding languages and inclusivity for the community. Campos said the city is complying.

Ultimately, Ureña said that the language issue was discriminatory in nature, and that Romo was the victim of said discrimination.

Romo has long preferred to speak Spanish in public. Although she does speak English at the meetings, it is clear she is not as conversational in the language as she is in Spanish.

In terms of translation services, that is an area that had been lacking during the pandemic, where much of the translating that had occurred was done in person during the meetings, in both languages. City Manager Miguel Figueroa informed the council that the last two meetings have featured translation via the Zoom links, which has a secondary audio channel.

Prior to council’s discussions, public opinion on the language issue was strong on both sides.

Calexico resident Loli Torres sent in an emailed comment on the issue. She shared an apparently inaccurate perception echoed later in the meeting by council member Moreno that the approval of the ordinance would have seen council meetings doubled in length due to all discourse occurring in two languages.

“How long will the meetings be?” she asked.

Torres advocated against the change, and took a parting shot at Romo: “With all due respect to Ms. Romo, with being on so many public boards, why hasn’t she engaged herself to take classes and comprehend the English language?”

“The majority of the community grew up with Spanish as its language,” he stated in his email. “Remember, the strongest tool of the imperialist oppressor has always been language. … There is no need to have people speaking in English, it’s doesn’t really represent Calexico.”

Resident Peter Mercado wanted to see the issue tabled altogether and brought back at a future meeting for more widespread community participation, believing the issue was being pushed through too quickly by Ureña and Romo.

“Governance (in California) is conducted in English … to abruptly change that without public input is unacceptable,” Mercado wrote in his email.

Calexico resident Daniela Flores was the only live caller, dialing in through Zoom to offer her opinion.

She urged the council to make the change, clarifying that the issue was about translation services ultimately. Flores said she recently had the opportunity to watch a council meeting with her parents entirely in Spanish through Zoom, which she implied was a great experience for the entire family.

Carried out over two agenda items, the City Council unanimously approved the purchase of radio-related equipment, and new body cameras and nonlethal weapons.

At a cost of more than $670,000 to be paid over six years starting in 2023, the council approved replacing the emergency dispatch radio consoles, emergency vehicle radio units, and portable radios for the Calexico Police Department. The existing equipment is more than 15 years old, according to information in the meeting agenda provided by Calexico Police Chief Gonzalo Gerardo.

The costs will be borne from COPS grant funding and the department’s operational budget. The first payment is deferred to 2023, when annual payments will be $111,743.35.

The second expenditure was for more than $403,000 over five years for 30-plus new body cameras and Tazers for police officers. The cost again is deferred to 2023, with increasing payments each year from the department’s operational budget, according to information in the agenda.

“We were the first department in the Valley to actually use body cameras. They’re very essential,” Gerardo told the council.

The chief added that the cameras improve officer safety, protect the city from liability, and improve officer performance. He said they have also minimized complaints because every interaction is recorded. 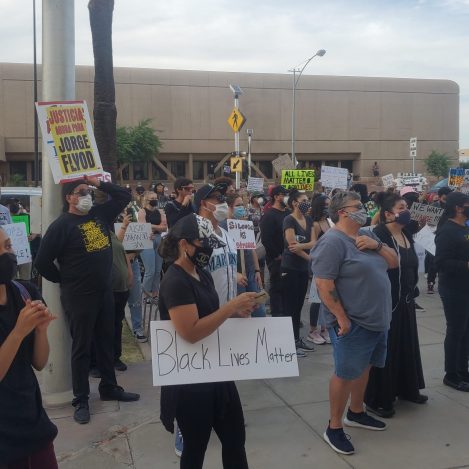 Imperial County OK’s $50K for Study of the Disenfranchised