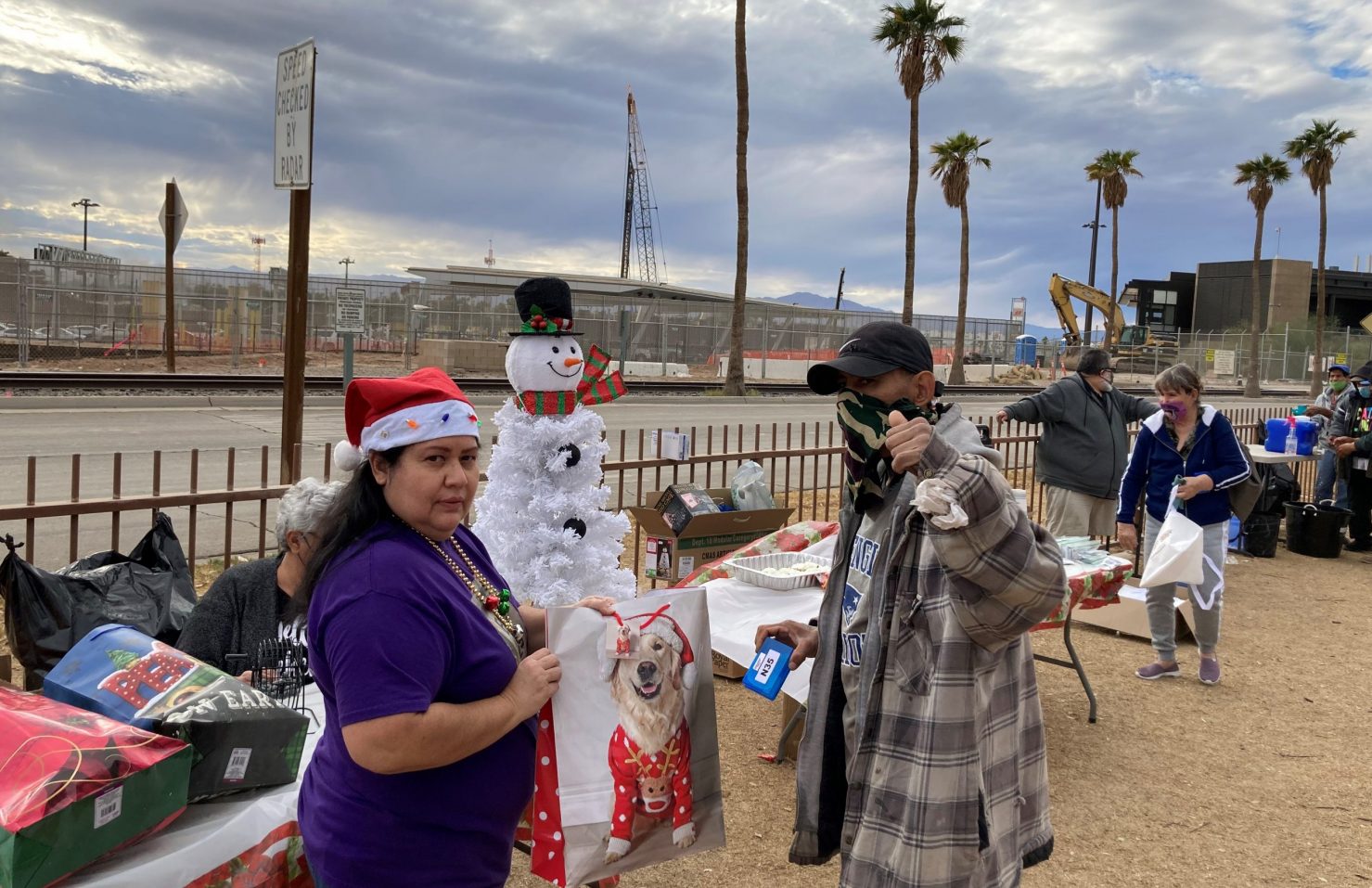 Brown Bag Coalition co-founder Maribel Padilla (left) and a local homeless man, Julio Flores, are shown after Flores won a raffle during the coalition’s annual Christmas Eve posada for the community’s homeless and needy on Dec. 24 at Border Friendship Park in Calexico. The coalition gave out gifts, serve coffee, sweet bread, and tamales to some 60 people during the event. | ELIZABETH VILLA PHOTO
Home
Local News
In Local News

CALEXICO — Despite the warnings of showers on a cold, overcast Christmas Eve, the Brown Bag Coalition did what it has done nearly every day since its inception — feed the city’s homeless population, yet with a holiday twist.

On Dec. 24, at Border Friendship Park on First Street and Paulin Avenue, the Brown Bag Coalition served meals to about 60 of the area’s homeless and needy and provided gifts during its version of a Christmas Eve posada.

Modified to meet the demands of COVID guidelines, the annual event started with a wash station set up for the homeless, followed by servings of hot coffee and cookies, and then they picked up wrapped gift boxes full of toiletries.

Down the line, the homeless and needy picked up much-needed pairs of jeans, sweatshirts, jackets, blankets, first-aid kits, beanies, scarves, and more of the essentials to surviving the elements. It all culminated in a tamale dinner savored by all.

“Lo estoy disfrutando como pocas veces … una comida de la mas sabrosa,” said Jesus Sanchez Zamora, which translated and paraphrased in English meant that he was savoring the meal like no other.

Co-founder and face of the Brown Bag Coalition, Maribel Padilla, said the nonprofit organization feeds about 50 people on any given night, 365 days a year — come rain or shine.

The coalition board is made up of Padilla as president, Teri Nava as treasurer, Diahna Garcia-Ruiz as secretary, and members Margaret Sauza and Chris Leal. The coalition networks with many organizations and agencies in the Imperial Valley to meet the needs of the homeless community.

For the Christmas Eve posada, the tamale plate was sponsored by Calexico’s McDonald’s restaurant. All other items were donated from businesses and community members, Padilla said.

Viviana Leal and her husband, Chris Leal, of Imperial, are feeders who helped with setup Dec. 24, providing the tamale plates, and cleaning up. The couple has been a coalition member since 2016, and Chris became a board member three months ago.

“Maribel made this happen. She literally planned, executed, and brought every single thing that is here. Lot of donations,” Viviana Leal said.

“Growing up in an area with disadvantaged or less privileged, I know what a lot of these people go through,” Viviana Leal said. The Leal family returned to the Imperial Valley after being away several years. She said she could not believe the homeless condition when she returned. As a result, the Leal family wanted to help.

“A lot of these men are not fully functioning people, and all they need is an opportunity, mental care, rehab, etcetera. A lot of these people get treated a certain way by society and authorities. I see them as friends that need us. They need help,” Viviana Leal said.

After the homeless and needy who gathered Dec. 24 finished getting all the giveaways and tamale plate, they lined up eagerly waiting for a raffle. The numbers were announced, and Julio Flores was one of the lucky winners. He gave a thumbs up when picking up his gift.

A family joining the posada — Amberlina Mike 11, Esau Mike, 7, and their mother, Amelia Mike, and Carlos Alcaraz — were also enjoying the tamale plate. Amelia said she was grateful for the gifts, especially the warm clothes for the kids. “I appreciate my family, and so many good people helping people,” Amelia said.

One recipient of the gifts who declined to give their name said, “Thank you for all that you (the Brown Bag Coalition) do for us. To all the world, may God protect you, and we should take care of one another.”

One Person Can Make a Difference

Born from a simple request to pray for the homeless during a freeze watch alert on Dec. 30, 2014, within hours two women, Padilla and Calexico resident Norma Aguilar, pushed to help establish an emergency shelter on Dec. 31 that year to protect the homeless from the harsh elements.

It was then that the Brown Bag Coalition was formed by Padilla and co-founder Aguilar, a former Calexico Unified School District board member who works at San Diego State University-Imperial Valley campus. In early 2015, the coalition began its nightly feeding of the community’s homeless.

Asked what has kept her feeding and advocating for homeless nonstop since, Padilla said, “Because they are somebody’s brother, son, husband, and just out in street because of drug problems, mental issues, etcetera. They don’t have anybody.

“To me, they are my extended family,” she added. “That is why I spend Thanksgiving, Christmas, and even my birthday with them.”

Many of the homeless in Calexico are considered chronically homeless, like “Peter the Navy Vet,” who Padilla said she met six years ago. They also can be farmworkers, who might sleep in their vehicles or on the streets.

Chronically homeless people are those who have been homeless for at least a year or repeatedly, and most likely struggling with a disabling condition such as serious mental illness, substance abuse, or a physical disability.

Some farmworkers such as Roberto Trujillo are unable to work consistently due to their conditions. He said, “Mal comido, aguantando frio y mal dormido, no cualquier persona puede ir al fil asi.” Translated to English, he said that being malnourished, enduring the cold and being sleep deprived, not anyone can go to work in the field in those conditions. He also mentioned that he has a medical condition that he declined to share.

It Takes a Village

Since the Brown Bag Coalition formed, Calexico residents and others throughout the Imperial Valley have contributed money and time to help the homeless.

“Fifteen people have a set date as feeders, then I go out and fill the other days,” said Padilla, referring to the rotation of those who donate funds, food, or time for the daily feedings at Border Friendship Park. “We also have backups. I take the holidays because I don’t want to take them from their families.”

Just as restaurants have had to adjust their food handling during the COVID pandemic, so has the Brown Bag Coalition.

“Feeders have to wear gloves, masks, etcetera. Covered plates are placed in a box on sidewalk with a case of water. The volunteers are not handing the plates to the homeless. Feeders are just making sure they take one plate each. They also mark the ground for social distance requirement of six feet,” Padilla said.

The county of Imperial provides handwashing stations at the park daily during dinnertime, except holidays when the coalition itself provides personal protective equipment like gloves and masks, and hand sanitizer.

“The ultimate goal is to eradicate (homelessness), but it’s not going to happen. In the real world, there are people who won’t be in the system, and that is their life and that’s how they choose to live,” said board member Teri Nava, who is also executive director of the Calexico Housing Authority. “We can minimize and truly assist them in getting them jobs and getting them back to their families.”

To donate to the Brown Bag Coalition, visit the organization on Facebook or call 760-997-2140.

Previous
IID: Controversial Labor Agreement Back Up for Discussion 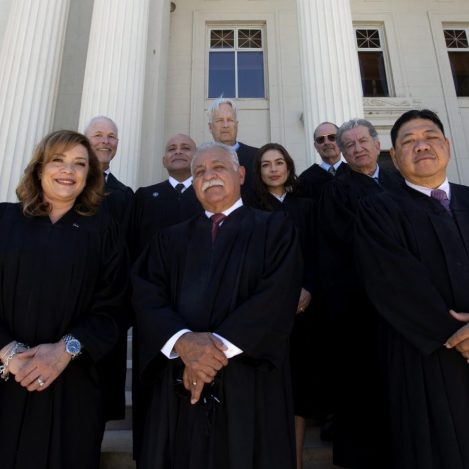