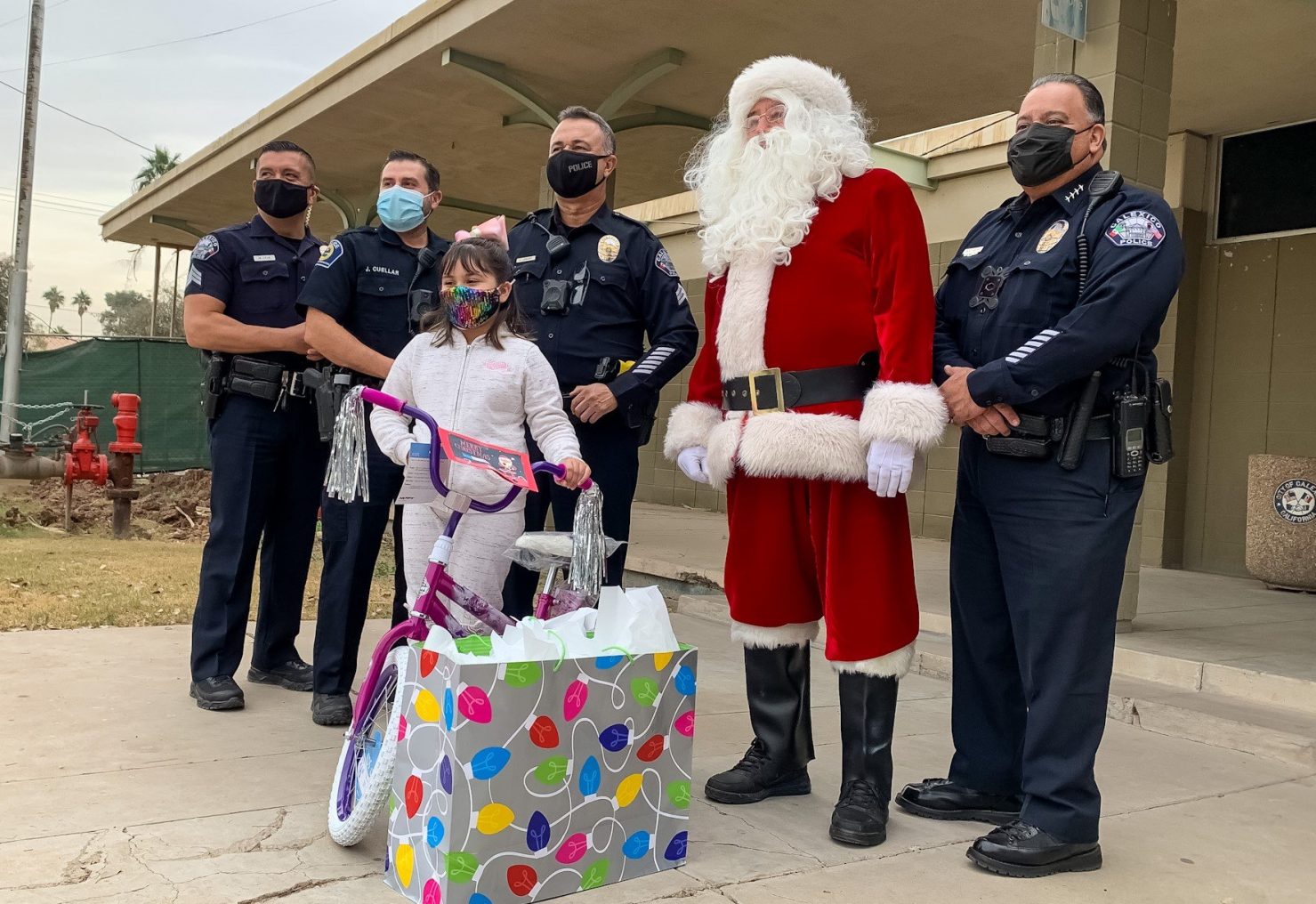 Calexico Police Chief Gonzalo Gerardo (from right), Santa Claus, Kids N’ Badges-Calexico Unites coordinator Sgt. Victor Legaspi, and two other officers from the Police Department stand with a Calexico girl who was one of two children invited to the police station in person to receive a new bicycle and toys as part of the 17th Kids N’ Badges-Calexico Unites event on Thursday, Dec. 17. Some 46 children had goodie bags with gift cards and other items delivered to their homes by Santa and his law enforcement “elves” earlier that morning. | CORISSA IBARRA PHOTO
Home
Local News
In Local News

CALEXICO — COVID has been very naughty to Calexico and its police force this holiday season, what with total infections passing the 6,000-mark this week and several officers and staff infected with the illness earlier this month.

But that didn’t keep longtime Kids N’ Badges coordinator Calexico police Sgt. Victor Legaspi and event volunteer, Rotary member, and Calexico Unified School District official Hortencia Armendariz from being very nice and giving more than 40 Calexico children some semblance of normalcy as they forged ahead in keeping the annual tradition intact, albeit with a twist.

Renamed Kids N’ Badges-Calexico Unites in honor of the struggles the community has had to go through the last nine months under the strain of COVID-19 and the rampant community spread of the SARS-CoV-2 virus that causes the illness, Legaspi said there was no way his department was going to cancel the 17th renewal of the event.

“We didn’t let COVID beat us. … It was an awesome event, and we had to reinvent the wheel because of the situation we are all in here in Calexico,” Legaspi said of Kids N’ Badges, which took place on Thursday, Dec. 17, in a new, highly mobile fashion.

In years past, the department, along with partnering first-responder agencies, have gathered dozens of Calexico children for breakfast, then a parade around town in emergency vehicles, a drop-in visit from Santa Claus, and a $100 shopping spree, where each child was paired with an officer, firefighter, or some other law enforcement agent, to run the aisles of Walmart and fill their shopping carts.

This year, the department took the event straight to the kids — Santa, atop a Calexico fire engine, and LEOs and firefighters from around the region went door-to-door bringing goodie bags stuffed with gift cards, certificates, books, and board games and dropped them off at the children’s homes.

“At a safe distance, we knocked on the door, the families came out, and we wished them a Merry Christmas,” Legaspi said.

“This house I went to, these three little girls went crazy when we got there with Santa Claus on top of the fire truck,” the sergeant said. “It was awesome seeing the smiles on their faces.”

Calexico Police Chief Gonzalo Gerardo, who had just returned to work that week after being off to recover from COVID, went out to deliver bags, as did about five other Calexico officers, Legaspi said.

The rest of Santa’s helpers were comprised of Calexico firefighters, including Chief Diego Favila, an investigator from the county District Attorney’s Office, correctional officers from the Imperial Regional Detention Facility east of Calexico, and several other volunteers.

Armendariz, who has volunteered with Kids N’ Badges all 17 years the event has been running, saw her role change this year from not just keeping track of the donations and participation of outside agencies, but actually doing the fundraising herself to pay for the gifts for the children.

Through various donations, Armendariz collected $4,800 to purchase gifts or gift cards for some 48 children. She said 46 $100 gift cards from Walmart were bought and placed in bags and delivered along with an additional canvas tote bag donated by Camarena Memorial Library.

Inside those bags, Armendariz said, were books from the library, coupons for a free meal from McDonald’s (which also donated the man in the red suit, Santa himself), certificates for a photo package from Paul’s Photography, which brought a drone to take aerial photos of the event, and board games and coupons for pizza donated by the Imperial Regional correctional staff.

Other volunteers and donors from around the community added to the haul with various items, Armendariz said.

For two special children identified by the Calexico Unified School District’s Family Resource Center, they were invited to the Police Department in person that morning after the goodie bags were delivered to receive a new bicycle and new toys from Walmart, Legaspi said.

Unfortunately, only one of the children could make it, but Legaspi assured the gifts for the second child would be delivered at a later date. 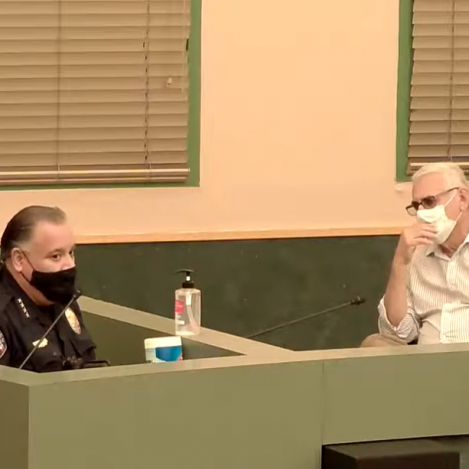