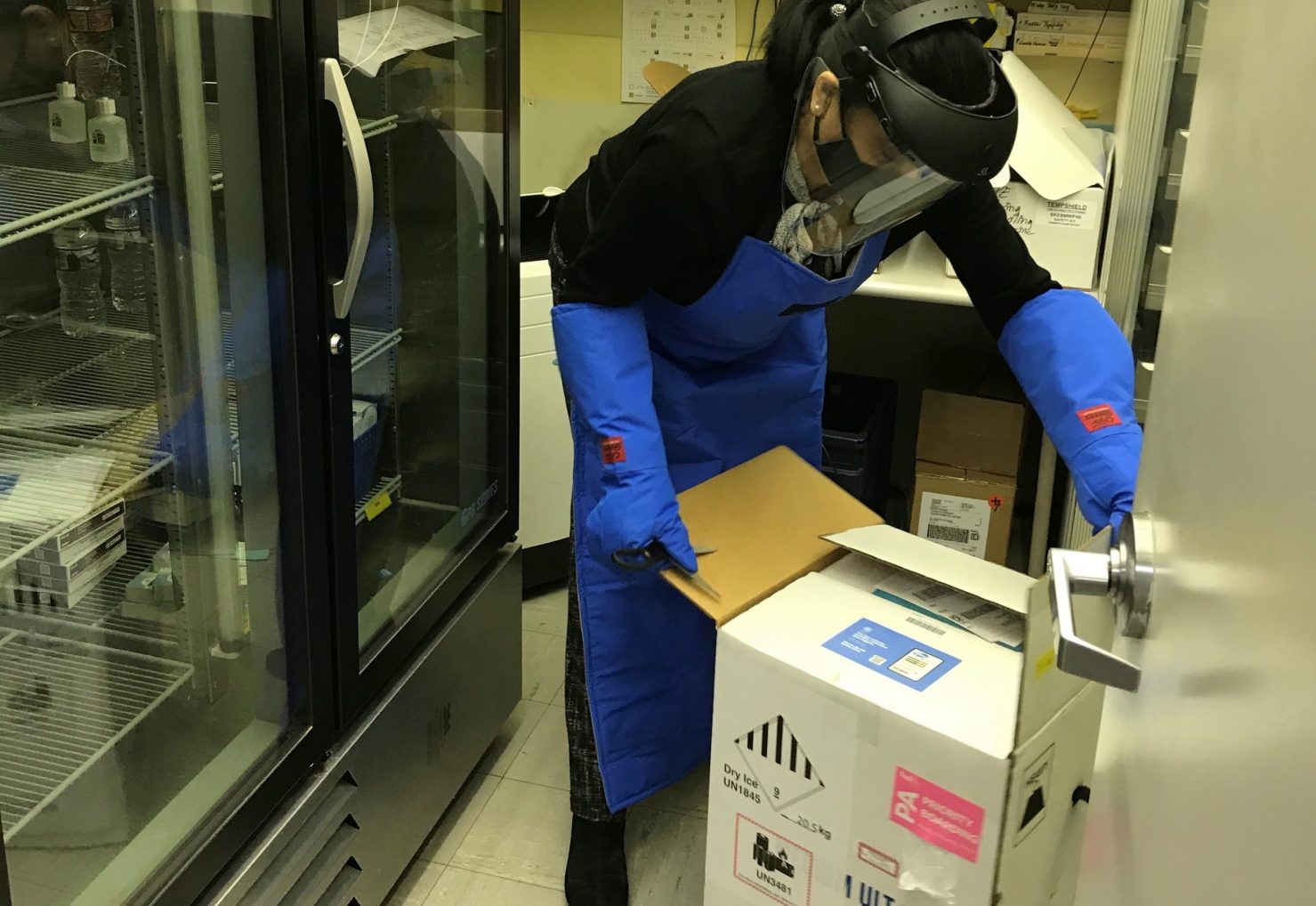 Imperial County Public Health Department received the first delivery of 975 doses of the Pfizer-BioNTech vaccine on Thursday morning, Dec. 17, and the first inoculations were expected to start “right away,” one hospital official said.

This comes as intensive-care unit capacity for the Southern California Region dropped to zero percent capacity with the most recent update from the state Department of Public Health on Thursday afternoon, Dec. 17.

Local hospital and county Public Health officials were expected to address the issue at a press conference at 3 p.m. Thursday.

Meanwhile, with the first doses of COVID vaccine already administered to front-line healthcare workers in hospitals in neighboring counties, including San Diego, it is now Imperial County’s turn.

Adolphe Edward, chief administrator of El Centro Regional Medical Center, said Wednesday, Dec. 16, he was expecting a delivery of 475 doses for his staff either Thursday night or Friday morning, Dec. 18, after which he said the hospital will begin inoculating staff members “right away,” hopefully as many as 40 to 50 in the first day of those “who will accept it,” he said.

County Public Health sent out a press release Thursday morning announcing the delivery, which stated vaccinations could begin as early as “this week.”

Edward and other key hospital staff plan to publicly be given the first dose of the two-dose vaccine on Friday during a Facebook Live update to show the public that it is safe, he said during a telephone interview with this newspaper on Wednesday afternoon.

A spokesperson with Pioneers Memorial Healthcare District in Brawley did not immediately have a date on when the hospital would begin administering its vaccine.

According to the county’s press release, Pioneers will receive 330 doses of the vaccine.

The remainder of the initial shipment of vaccine, which will be 170 doses once ECRMC and Pioneers is accounted for, will go to “local emergency medical technicians (EMTs), paramedics and public health department vaccinators,” according to the county release.

This week’s shipment is part of the Phase 1a distribution of the vaccine, which includes high-risk workers in healthcare settings, first responders and patients and staff of long-term care facilities, County Public Health has said.

It wasn’t available at what point the long-term care facility residents and staff would get their inoculations.

“The COVID-19 vaccine is an important step towards eliminating the surge of COVID-19 and regaining a sense of normalcy in our community,” stated Dr. Stephen Munday, Imperial County Health officer, in the Dec. 17 release. “While it will be a little while longer before we have enough vaccine available to vaccinate the general public, it’s not too early for everyone who will be eligible to receive the vaccine to begin making plans to get it once it becomes available to them.”

State officials estimate that vaccines for the general public could be available as early as spring 2021, county Public Health stated.

Edward said that by Monday, Dec. 21, the county Public Health Department informed him his hospital would receive a second wave of 600 doses of the Moderna vaccine, which was expected to receive U.S. Food and Drug Administration Emergency-Use Authorization by the end of the week.

County Public Health Director Jeanette Angulo said on Tuesday, Dec. 15, that the county was to receive 1,200 doses of the Moderna vaccine on Dec. 21 if the emergency authorization is awarded.

Edward said there would be a total of 1,058 doses available for his hospital staff over the next two weeks, and he added that the second dose of the two-step process would follow in 21 to 28 days. The second Pfizer dose is 21 days after the first; it is 28 days later for the Moderna version.

The hospital is ready to receive the doses, too, as it already has the sub-zero refrigeration unit in place that is required to store the temperamental Pfizer-BioNTech vaccine. Although a hospital spokeswoman said that for security reasons she could not day where the freezer was located, she did provide photos of the unit.

The PHCbi ultra-low sub-zero biomedical refrigeration unit allows for the Pfizer vaccine to be stored at -70 degrees Celsius, or -94 degrees Fahrenheit, within a range of 10 degrees.

As far as how the vaccine will roll out at El Centro Regional, Edward said it would be a calculated mixture of different staff members from different departments, so not all staffers from the same department would feel the effects of vaccine at the same time. In fact, the hospital would attempt to inoculate its healthcare workers at the end of their shifts, so each would have a few days to recover from the vaccine, if they feel ill effects.

“The plan is complex,” Edward said. “We have a lot of different buckets at different times. … It’s like a military machine.”

Angulo reported Tuesday that the Imperial County’s COVID-19 Vaccination Plan that was submitted to the state Department of Public Health last week was posted to county Public Health’s website this week.

“It’s a very high-level view of a plan,” she said. “It needs a lot more information and work. That plan, by no means, is a final document.”

A single Pfizer-BioNTech “pizza box”-style package in dry ice delivered to Imperial County Public Health by a FedEx truck was expected on Thursday. Inside that single flat box will be 195 vials of vaccine, with each vial containing five doses. That’s 975 doses of COVID-19 vaccine per box.

The vaccine is set to arrive as the local hospitals continue to burst at the seams with COVID patients and high volumes of patients in general.

On Thursday, the 161-bed El Centro hospital had a total patient census of 159, with 124 of those patients being COVID-positive.

Edward said as of noon Wednesday, there were 24 of 26 intensive-care unit beds filled. He said the good news was the hospital had just received the staffing necessary to expand its ICU from 20 patients to 26 this week.

The hospital announced the arrival of 33 medical staff members from the U.S. Department of Health and Human Services’ Disaster Medical Assistance Team on Monday, Dec. 14, according to a press release.

No patient census data was available for Pioneers. There were 25 patients in the county-run Alternate Care Site at Imperial Valley College on Wednesday.

ICU capacity for the Southern California Region, of which Imperial is a part, along with 10 other nearby counties, continues to plummet, dipping to a new low of zero percent capacity, as of Thursday afternoon.

There are now four regions of the state under the trigger-point of 15 percent ICU capacity. Southern California, the Greater Sacramento Region at 11.3 percent, the Bay Area Region at 13.1 percent, and the San Joaquin Valley at 0.7 percent cumulative ICU capacity, all as of Thursday.

Some 39.4 million Californians, or 98.3 percent of the population, are now living under a regional stay-at-home order triggered by the ICU-capacity levels.

As Southern California cumulative capacity reached 2.7 percent on Monday, county Public Health officials and the local hospitals issued a joint press release calling for the community to help get the spread of the virus under control.

“COVID-19 continues to spread and is creating dire situations throughout the state,” county Public Health Officer, Dr. Stephen Munday, stated. “I can’t emphasize enough the need for everyone to do their part to curb the spread of the virus. A completely overwhelmed healthcare system would be (a) worst-case scenario that will result in unnecessary loss of life. We must do everything within our power to avoid that situation.”

This statement came when regional capacity was comparatively higher. Munday was asked during a press conference on Dec. 10 what would happen if the region ran out of ICU beds altogether.

He didn’t really answer the question, instead saying, “We don’t want to get to crisis levels.”

On Wednesday, Imperial County had some 2,475 active COVID cases, and reached 394 deaths, which were from some weeks ago, presumably, as Munday has said death reporting can be delayed for some time due to cases being investigated and death certificates being required before the county’s COVID surveillance dashboard can be updated.

But make no mistake, the virus is killing those in the local hospitals daily. Edward said three people died from COVID in El Centro Regional on Tuesday alone.

By the numbers and hospitalization rates alone, it appears that COVID conditions are worsening by the day, and it’s unclear where the virus stands.

“The epidemic is clearly increasing,” Munday said Dec. 10. “We don’t know exactly where on the curve we are.”

What makes this surge different than the last time Imperial County went through this is, we’re not alone and we’re not the worst.

As of Dec. 16, neighboring Yuma was ranked No. 1 in the nation for metropolitan statistical areas with the greatest number of new COVID cases, relative to their population, over the last two weeks at 185.7 per 100,000 residents. The El Centro MSA was No. 15 with 127.9 per 100,000 residents.

In response to the worsening hospitalization rates, and more specifically, the ICU rates in the county, Edward and Pioneers CEO Larry Lewis on Monday shared their experiences and concerns.

“We are stretched. We are running out of beds, we’ve experienced staff getting sick, and are out of resources.” Edward stated in the Dec. 14 joint press release. “What we need to do is what the public health officials are asking. Please help us reduce the infection or we will be in a bad spot.”

“Our numbers at Pioneers reflect the surge in cases and have resulted in support staff being from the state being allocated to the hospital through the 24th of this month, in addition to the EMSA registry staff already assigned through January. At present our 12 ICU beds are full and six more patients are waiting for critical care beds in the Emergency Department,” Lewis stated Monday.

In addressing the idea that local hospitals could run completely out of capacity, Edward offered some perspective last week in highlighting yet another difference between what he has continually referred to as “COVID 1.0,” or the major surge or the summer, and the present “COVID 2.0” is the level of physical capacity built at the local hospitals and within the county, as well as the “sophistication” of treatment.

For infrastructure, Edward reiterated that his hospital remained built-out in some form from the earlier surges and increased its physical footprint earlier this time, with the 50-bed medical-surgical tent expansion in place.

From a treatment standpoint, he said there have been medical advancements in pharmaceuticals and how patients are treated once they are in the hospital, which has cut down on time hospitalized, increased discharge rates, and lowered mortality.

“We’ve learned to manage at a much higher level,” Edward said on Dec. 10.