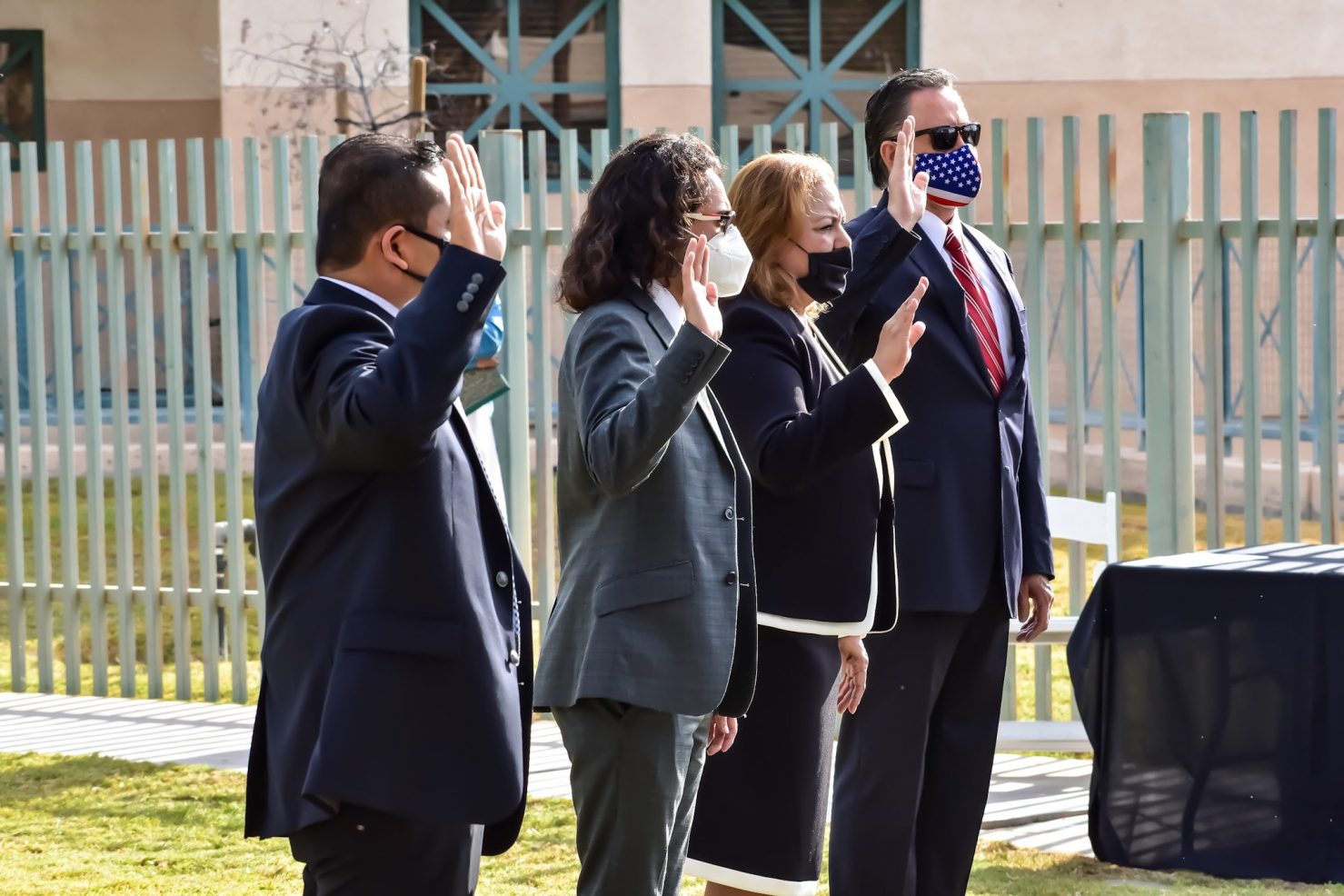 CALEXICO — Newly elected leaders of the Calexico City Council touched on their top priorities during a swearing-in ceremony, where they shared their hopes of addressing local voters’ desire for change following the ouster of all but two of the previous council members in the Nov. 3 general election.

Each sat at a safe distance on either side of Mayor Rosie Arreola Fernandez, the sole member of the council whose seat was not up for election this year, during an outdoor ceremony that was live streamed in response to social-distancing measures.

Outgoing council members Lewis Pacheco, Bill Hodge, and Morris Reisin, all of whom lost their bids to be re-seated, were thanked during the ceremony.

The first new council member to address the community following their official installation was 23-year-old Ureña. Speaking entirely in Spanish, he thanked voters for participating in the election despite the pandemic and took the time to highlight issues exacerbating the already-deadly COVID crisis, including pollution, diabetes, obesity, asthma, and the lack of emergency assistance, improved access to medical attention, and preventive care measures.

“Today, Calexico awoke with an air contamination two points higher than Beijing, China,” Ureña. “This isn’t the first time; this happens regularly. These high cases of chronic health issues related to the environment are only complicated more by COVID.”

He also discussed how he would like to bring a voice to those in the community he believes have often been marginalized by the city, including those living in poverty, farmworkers, both Hispanic and Filipino, African Americans and Asian Americans that have come to call Calexico home.

Following Ureña, Romo also thanked the community for voting and reaffirmed her commitment to the citizens of Calexico.

“I am committed to all the residents of Calexico and I will not let you down,” Romo said in English, continuing the rest of her speech primarily in Spanish, which she briefly addressed.

“Spanish is the majority language spoken in the city, and for that reason, my communication will be in both languages, Spanish and English, for the best communication with each individual in the community,” Romo said.

She also promised to listen to everyone’s opinions and suggestions within the community and to work efficiently and cordially with the rest of the council and staff to improve the city’s economy slowly but surely.

“I’m not going to lie to you. Our country, our state, our county, and our city are amid a great economic and psychological crisis due to the pandemic, and why not say it, errors made in the past,” Romo said while speaking in Spanish. “I want to make it clear, I come to work for everyone and because of everyone.”

Romo also said the city “must be more active and interact with all our commercial businesses” in Calexico and that she will provide all the support she can during her time on the council.

“The city works for everybody to provide the best services for the basic necessities like water, parks, recreational, etc.,” she said. “I have come with all my strengths and experience to work in uniting the city with you.

The former Heffernan Memorial Healthcare District Trustee said, “My priority will be the transparency of this city council. A community well informed will be the primary initiative of the new council, and I will ensure that.”

As a way of doing her part toward this effort, Romo promised to keep the community informed through all her various media platforms about any matters that are of the utmost importance to the city and any projects that may impact citizens.

She took a moment to share her deep condolences to those residents in Calexico, the Imperial Valley, and south of the border who have lost family members, friends, and loved ones due to COVID by requesting a minute of silence during her speech.

Like many of his fellow council members, Javier Moreno spent the start of his speech thanking the community, voters, and city staff that had made the afternoon ceremony possible.

“I talked to people of all walks of life, and I expressed in many different ways (how) I believe the government can serve the city,” Moreno said. “They all come from one fundamental truth, the government functions properly when it is accessible and accountable to the people.”

Moreno also said by making improvements to the city’s economic development, health, and public safety, he hopes to be able to assist the community.

“Our city faces many challenges, including rising COVID cases and death, struggling small businesses, a looming eviction crisis, and a significant fiscal impact to our city’s budget,” Moreno said. “Each citizen plays an indispensable role.”

Moreno reiterated the need for the community to abide by social-distancing measures, quarantine, and wearing masks as a group effort to combat the spread of the coronavirus.

“As we move forward through these unprecedented times, I want to make sure our families get well and get all the help they need,” Moreno said.

He shared that he stands ready beside the rest of the council members in ensuring “the city government is more responsive and accountable to its citizens.” He also pledged “no person, no home, no community will be beyond the reach” of his call.

“I’m committed to increasing transparency and openness, discussing the many issues that impact our city,” he said. “So, we can more efficiently deliver services and more effectively track and communicate the progress and achievements of our city.”

Moreno said he looks forward to the opportunity to address issues involving the New River, housing, homelessness, senior citizens, and public safety during his four-year term on the council.

Camilo Garcia, who was appointed by the last council to fill the vacancy created by the resignation of defamed council member David Romero, who pleaded guilty to federal public corruption charges, shared his appreciation and gratitude to those community members that voted for him to retain a seat on the council.

“The change is here, and the time for you to hold your elected leaders accountable is now,” Garcia said. “This is a time for action.”

Garcia refrained from listing all the problems facing the city, because he believed that most citizens have come to know these issues all too well.

“We know there’s issues that go beyond the pandemic, poverty, environmental challenges, that have been here for many years,” he said. “Let’s get to work. Let’s make sure we address all the pressing issues.”

He said that some work goes beyond the council and requires the community to recognize that the “commitment and responsibility is on all of us.”

“You don’t need an authority to tell you to wear a mask or not to have mass gatherings,” Garcia explained. “We don’t act alone; we don’t live alone.”

Garcia took a moment to address those voters who might not have voted for him. To them, he promised to work hard to make sure that he earns their trust.

“I’ll make sure that I’ll work with you and reach out to you,” he said. “I’m not here to make promises, I’m here to propose to make sure we work together.”

Mayor Fernandez said she was thankful and appreciative for the work Lewis Pacheco, Bill Hodge, and Morris Reisin accomplished.

“You all have done a remarkable job during the term you served,” she said. “We stood united as a team and worked diligently to make our city of Calexico a better community.”

Hodge and Pacheco were presented with plaques in recognition of their service. Reisin was not in attendance at the ceremony. He also did not attend the final full meeting of the last council on Dec. 2.

“The voters have spoken and that needs to be respected,” Hodge said after receiving his plaque. “I congratulate all the new City Council members, but I believe without a doubt that we, the 2016 council, were one of the best city councils in the last 15 years.”

Hodge highlighted the council members’ collaboration and often respectful manner with each other. He was also proud of the projects they were able to accomplish and those for which they laid the groundwork.

Pacheco reminded those in attendance that the 2016 council was elected during a time in which Calexico was $3.2 million in the red.

“When we came on board, that was our challenge. … We were in almost bankruptcy,” Pacheco recalled.

“I’m giving you a balanced budget not in the red,” he said of the current state of the city’s finances.

Pacheco thanked those who voted for him, along with thanking the city manager and other city staff for their support and help throughout his time on the council. 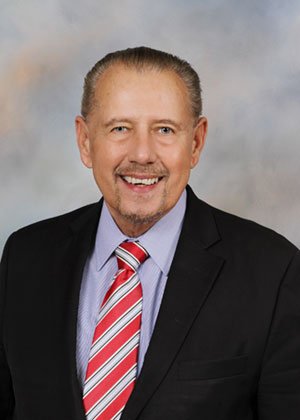