Letter to the Editor: SDSU-IV Students Speak Out on City Land Sale

RE: Opposition to City Council Action on Item 4: Approval of Resolution

Declare Certain Properties Exempt Surplus Land Act; Approve the Sale of Said Properties to the U.S. Army Corps of Engineers pursuant to a Purchase and Sale Agreement; Find These Actions Exempt from Review under the California Environmental Quality Act.

We, the members of the six recognized student organizations of San Diego State University, Imperial Valley Campus, as residents of the city of Calexico, express our opposition and absolute disapproval of the resolution of selling 2.5 acres of Calexico’s land along the border to the U.S. Army Corps of Engineers for $26,700 and designation of this land as exempt surplus and the exemption from the California Environmental Quality.

Our city, Calexico, has been a city grown and developed by the hard work of Mexican immigrants. The resolution includes not only the sale of borderland but also dividing our own people through the creation of a frontier where the cultures have become inter-mixed and interlaced through the generations. Calexico’s population is well-known to travel back and forth to our sister city, Mexicali, where many of our kin reside, but importantly, where many of our values are inculcated.

Mr. Garcia, we urge you to vote “NO” on this item. This borderland can have many beneficial purposes for public work that benefit the community. This land can be used in a variety of creative and innovative ways by:

This action demonstrates the Calexico City Council’s lack of attentiveness to the needs and wants of our community. We sincerely urge you to vote “NO” in this action because instead of creating a peaceful and safe environment in our community, this action threatens the children and the youth of our community. Utilizing the land to install a military and defensive zone is very concerning. Are we preparing for a war?

If this administration and the City Council members are determined to safeguard and create a massive protection plan that can benefit this city’s population, we suggest proposing the following as priorities: increase Police Department funding, a task force that combats COVID-19, and a plan to lower domestic crimes and gang-related activity. We believe these items to be more propitious to the local community, not on selling borderline land.

The community has spoken during the recent elections. You and the entire population of our beloved city chose a progressive platform of candidates who are now defending the will and Calexico residents’ dreams. We elected you as a representative of the community; with that in mind, we urge you against this proposal. Our voices stand in collective opposition to this item.

Aztecs Around the World (AAW) 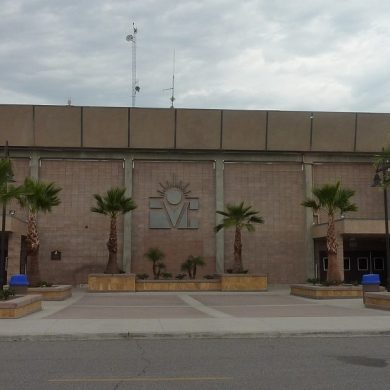