Proposal to Change IID Reorg. Raises Ante on Board Shakeup

As if the very shakeup that has occurred on the Imperial Irrigation District Board of Directors was not enough to signal a sea change, a shift in governance policy being floated next week is yet a new bold predictor of the future.

A complete administrative reorganization for the Board of Directors is on the agenda for Tuesday, Dec. 15, as an informational, nonaction item, and it’s being pushed by four-term Director James C. Hanks.

That reorganization, if successfully adopted at a future meeting, would do away with the current government policy that states newly elected directors cannot be president and vice president of the board until they have been in office for two years.

This comes as IID board Vice President Alex Cardenas was due to ascend to the board presidency, and as first-time directors JB Hamby and Javier Gonzalez take the dais in their first official meeting with the board after their Dec. 4 swearing in following the Nov. 3 election.

The proposal is at odds with an action item on the agenda to conduct the board re-organization per usual. It’s unclear what could happen. Presumably, if there are enough votes next week, the organization would be tabled, and the new policy be given an airing at a future meeting.

If enacted, the new policy would suspend the current reorganization system, which is a rotational one in which every division’s director serves during a five-year period. The new system being proposed allows any board member to be nominated for president of the board, according to the resolution presented next week. The candidates for president give a five-minute speech, then the board elects from the nominees, the proposed new policy states.

The action, current board President Norma Sierra Galindo said, is a way to bypass Director Cardenas, instead allowing junior members to serve before they have gotten used to the way the board runs.

Director Hanks could not be reached for comment after numerous attempts since late last week. The agenda and back up information for the Dec. 15 meeting and reorganization was posted Thursday afternoon, Dec. 10.

Plans for the Future

Although the new Imperial Irrigation District Board of Directors will meet Dec. 15 for the first time, two factions have already formed and met separately, for all intents and purposes, on Dec. 4, the day of the swearing-in ceremony.

Hamby and Gonzalez were sworn in during a noontime ceremony in front of the Imperial County Courthouse in which only one current director attended — James Hanks. At 1 p.m. that day, the Board of Directors met with outgoing board members, Bruce Kuhn and Erik Ortega, to thank them for their service.

Due to social-distancing guidelines, IID officials were prevented from staging the ceremony in Condit Auditorium, and a stripped-down version outside IID headquarters in El Centro would not include members of the new directors’ families and friends.

It was the first time that a district spokesman can remember that an installation ceremony of new directors did not occur under the aegis of the larger Imperial Irrigation District.

That separate swearing-in ceremony has left a bad taste in some people’s mouths.

However, the organizer of that event, Hamby, says it was a wonderful and safe way to allow those involved in the campaigns and family members to be involved in a momentous event.

“My responsibility is to serve the people in my division and, more broadly, the district as a whole,” he said, adding that he plans to serve his constituents’ needs. “I’m not terribly caught up or interested in board politics or personality spats, I’m more interested in delivering on what the voters expect of me. My division expects the directors to comport themselves with decorum and work together for what’s in the public interest.”

He plans to go into the next four years focusing on issues, one of the most pressing being an upcoming agreement for Colorado River water use. The last agreement, set in 2007, is going to expire in 2026.

Hamby said he has been working with other rural agricultural communities, tribal communities, and conservation groups in other states to find common ground so they can have a united front against the urban and suburban water users. The region is facing ongoing drought, and the goal is not to lose water that is needed in the Imperial Valley.

“It’s about advancing the interest of the Imperial Valley, and addressing the issues we have here,” he said. “… There’s just one example after the next where IID was taken advantage of. I think it’s incumbent on all of us, especially me as one of the two most recent members, to preserve water for use in the Imperial Valley.”

Gonzalez did not immediately return calls seeking comment for this story.

Contentious Board Meetings Ahead?

When asked if she feels it will be a contentious board, Galindo responded, “Absolutely.

There is a misunderstanding by the two newest members of the board about their job as a director and the role of the district in fiduciary responsibility, she said. And there are two issues that will come up within the next few years.

The first is the continued lawsuit by grower and former IID Director Michael Abatti, she said. The second is the grab for power in Riverside County.

Abatti has appealed his lawsuit, originally filed in 2013 over the district’s water-management plan, to the state Supreme Court, which was denied a re-hearing in late October. A bid to be heard by the U.S. Supreme Court appears to be in a holding pattern.

Now that the board composition has changed, Galindo said she is certain Abatti has three votes in his favor on the board, which is an extreme concern for her.

Aside from the two new directors, Galindo did not directly say who that third would be, although it could be assumed at this point it might be Hanks.

The other issue, Assembly member Chad Mayes’ contested proposal to add six seats from Riverside County to the IID board, may have died down since the bill didn’t have enough support to move forward, but Mayes has said the idea and concept are still alive.

The issue centers on representation in eastern Coachella. While 60 percent of IID’s electricity customer base lives there, they have no policymaking representation on the district’s board.

The ultimate goal of people like Abatti and those who are aligned with him, Galindo said, is to divide the district into an electrical board and a water board, the latter of which would be run by farmers.

“These to me are very serious threats that the community is facing, and the incoming board, in my experience, they are very much in favor of doing this,” she said.

Previous
Letter to the Editor: SDSU-IV Students Speak Out on City Land Sale 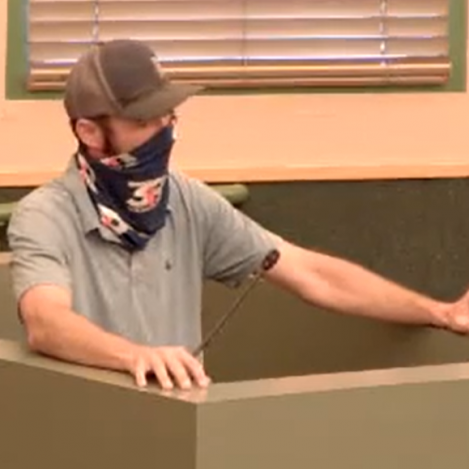