Deputy El Centro Police Chief Robert Sawyer (left) and Calexico Police Chief Gonzalo Gerardo are among those law enforcement officials who weighed in this week regarding enforcement of state and local health orders that are becoming increasingly more restrictive as cases of COVID-19 increase. Many law enforcement agencies are opting against a strict crackdown; rather, they are continuing to take a more "educational" approach with health order violators. | FILE PHOTO ILLUSTRATION
Home
Featured Stories
In Featured StoriesLocal News

The strict enforcement of Gov. Gavin Newsom’s COVID-19 lockdown orders of Sunday, Dec. 6, further curbing business and social activities does not appear to be a top priority for some local law enforcement agencies.

Some departments have indicated that their emphasis will remain on educating the public of the current restrictions in place instead of penalizing them, and that staffing levels may also limit their ability to respond to reports of potential violations.

“We have taken the stance throughout the pandemic that our officers will educate our citizens and encourage compliance,” said El Centro Deputy Police Chief Robert Sawyer in an email Tuesday, Dec. 8.

Additionally, calls for service stemming from violations of the governor’s orders will take a lower priority for officers, who may not be able to handle them promptly on account of the department’s limited resources.

“That said, we will address large gatherings or violations of the state’s orders in a manner consistent with the Spirit of the Law,” Sawyer stated. “Fortunately, our community has generally been extremely understanding and compliant.”

The Calexico Police Department indicated that its enforcement actions would depend largely on staffing availability. The department is currently short-staffed, a situation made worse for the next couple of weeks by a COVID outbreak among officers.

The Imperial County Sheriff’s Office plans to evaluate and assess all calls regarding COVID-19 restrictions and the potential dangers any violation may be to the communities we serve, said Chief Deputy Robert Benavidez in an email Monday, Dec. 7.

Imperial County and the 10 other counties that are included in the Southern California region have been under those restrictions since midnight Sunday, Dec. 6, when its ICU capacity was slightly above 10 percent.

Regions whose ICU capacity is below 15 percent must remain under the state’s shut-down restrictions for a period of at least three weeks, during which time private gatherings of any size are prohibited, masks are required in all business sectors, and outdoor dining be discontinued.

In Imperial, where the City Council in August had authorized unessential businesses to reopen at their own discretion, the Imperial Police Department has also been educating businesses about local and state health officer orders.

The department has responded to an undisclosed number of reports of people not wearing masks inside of businesses, prompting officers to urge the citizens to wear a mask, and provide them with masks if they do not have one.

Imperial officers also have met with business community members on a face-to-face basis to assess their needs and have yet to take any enforcement action, said Sgt. Max Sheffield in an email Wednesday, Dec. 9.

“We continue to urge businesses to operate in a safe and healthy manner,” Sheffield said, noting that the Imperial Police Department has had concerns with the state’s ever-changing health orders.

Calexico Police Chief Gonzalo Gerardo expressed a similar sentiment regarding Newsom’s orders, considering the governor had himself violated his own rule against socializing with others outside of one’s household in November.

Such behavior, coupled with the fact that state legislators in recent times have advocated for police reforms that Gerardo said could potentially put officers’ lives and careers on the line, doesn’t exactly promote compliance on behalf of law enforcement agencies.

“Imagine if we go out to enforce an order and we end up shooting or killing a citizen for an order that won’t get prosecuted?” Gerardo said on Sunday, Dec. 6. “The officer’s life and career are ruined.”

Locally, Newsom’s Nov. 21 order implementing a 10 p.m. to 5 a.m. statewide curfew does not appear to have generated many calls for service among local law enforcement agencies.

Both the Imperial and El Centro departments reported a slight uptick in calls for service, but mainly from citizens asking about the departments’ intentions rather than to request enforcement action. In the case of ICSO, it did not experience a rise in call volume nor had to take any enforcement action. 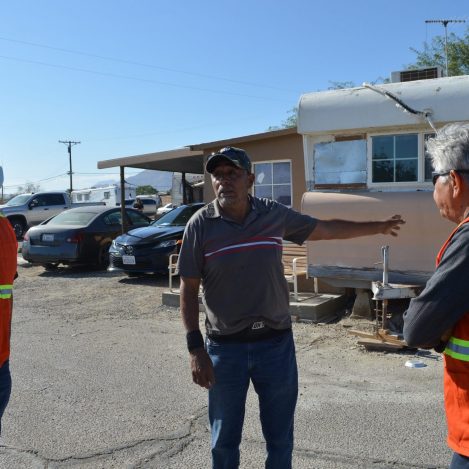