Calexico police officers respond to a domestic dispute on Sunday, Dec. 6, on East Sixth Street. Six patrol officers and the chief of police are down after testing positive for COVID-19. Starting Wednesday, Dec. 9, units from outside agencies will patrol Calexico’s streets for the next two weeks to fill in for the downed officers. | IMPERIAL VALLEY LAW ENFORCEMENT AND FIRE PHOTO
Home
COVID-19
In COVID-19Local News

COVID Outbreak at Calexico P.D. to Bring in Outside Cops

CALEXICO — A COVID outbreak on the Calexico police force, including the chief himself and six officers, will see cruisers from nearby communities augmenting patrols in the border city for the next two weeks starting Wednesday, Dec. 9.

One of the ill officers was in a Los Angeles-area hospital as of Tuesday night, Dec. 8, Gerardo said.

The chief would not reveal the officer’s identify, but he said he found out through social media about the hospitalization and later confirmed it himself earlier Tuesday. Gerardo said he tried to reach out to the officer but hadn’t immediately heard back from him.

The officer is reportedly Luis Casillas, who was identified on a social media page that asked for prayers for the veteran lawman. He was apparently in the intensive-care unit, according to the post.

Gerardo, who has been isolating at home with his immediate family, contracted COVID a couple weeks ago through an exposure to a family member. Although he and his wife did feel the mild symptoms, Gerardo said he is feeling better but will be out through the rest of the week.

A mutual-aid pact put together by the chief from home will kick in at 7 a.m. Wednesday morning to fill in the gaps for service brought on by the coronavirus infections.

“We’ve done pretty well since March. I knew we were going to get hit, but not this bad,” Gerardo said Monday from his home.

While the chief has been doing a lot of work from home, Lt. Jesus Serrano is basically serving as acting chief in Gerardo’s stead.

All six officers who contracted COVID were believed to have gotten it on the job in the normal course of dealing with suspects or responding to calls for service, the chief said.

He said some staff members should start returning to work by next week.

Calexico has been the hardest-hit community throughout the pandemic. As of Dec. 8, there have been a total of 5,312 COVID cases in the city, with larger El Centro coming in second at 4,569 cases. Calexico had 380 active cases and the most deaths of any Valley city, with 124.

Meanwhile, officers from the El Centro Police Department, deputies from the Imperial County Sheriff’s Office, and investigators from the county District Attorney’s Office, who have sworn police powers in the state of California, will make up the 12-hour shifts (7 a.m.to 7 p.m) that will run Wednesday, Dec. 9, through Saturday, Dec. 12, and Wednesday, Dec. 16, through Friday, Dec. 18.

Each shift will have at least four outside officers patrolling in their department vehicles, including a marked DA’s Office unit.

Gerardo said the remaining Calexico police officers will pick up all the other shifts as normal.

Since the pandemic began, Calexico police staff has had a total of 19 COVID infections, but only 10 of those have been sworn patrol officers. Most were non-sworn personnel affected during an earlier surge, Gerardo said.

The chief said all officers are vigilant about wearing personal protective equipment like masks and gloves, they carry hand sanitizer, disinfectant wipes, and patrol units are cleaned out daily, and more important, patrol units are “fogged” every week by a professional service.

He said before every shift, all Police Department staff, sworn and nonsworn, fill out a questionnaire asking how they are feeling and have their temperatures checked by a sergeant, Gerardo said. Those forms are filed with administrative staff.

Gerardo said to bring the additional patrols on, he had to enact a mutual-aid agreement through the Imperial County Emergency Operations Center. Bringing in the officers will cost Calexico, but the chief said the costs are more than 90 percent recoverable through the Federal Emergency Management Agency because the cost is related to COVID response. 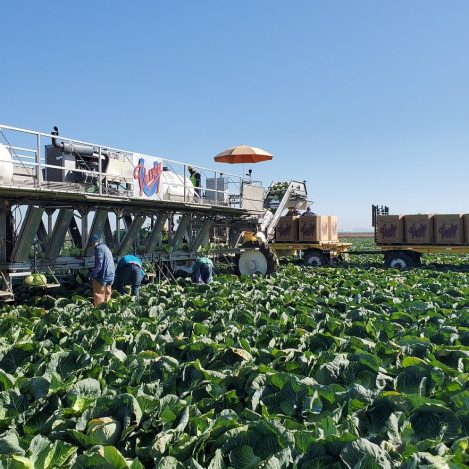 Cloudy Skies Ahead for Future of Farming