Rosita Deborah Torres (left) and Daniel Alexander Munguia (right) were back in court Jan. 7 in their murder and conspiracy trial in the killing of Raul “Bubba” Esparza in September 2019. The next court appearance for the pair is Feb. 18. | CALEXICO CHRONICLE PHOTO ILLUSTRATION
Home
Local News
In Local News

The murder and conspiracy trial against suspects Rosita Deborah Torres and Daniel Alexander Munguia, who stand accused in the killing of El Centro resident Raul “Bubba” Esparza in September 2019, continues to be pushed back.

Torres and Munguia appeared in the Brawley Superior Courthouse on Thursday, Dec. 3, before Judge Christopher Plourd, but the case against them, as well as a bail review hearing for each, was continued until Jan. 7 due to Torres’ court-appointed defense attorney, Stephen Honse, being absent from court last week, according to Imperial County Assistant District Attorney Deborah Owen.

Torres and Munguia are being tried together by Imperial County Deputy District Attorney Martin Gonzalez.

Torres was arrested on the charges on Aug. 20, while Munguia was already in jail from a July 30 arrest on unrelated charges.

Both are being held on $1 million bail in the county jail.

What makes the case particularly unique is what may yet prove to be a connection to the unsolved murder of Torres’ son, Christopher Erasmo Torres, who was shot and killed in almost the identical spot that prosecutors say Esparza was killed, and just several weeks apart.

To this day, El Centro police nor officials with the Imperial District Attorney’s Office have officially connected the cases, other than El Centro police acknowledging the fact that Chris Torres is Rosita Torres’ son.

(To read the Calexico Chronicle’s story on the possible link between the murders of Esparza and Chris Torres, click here.)

Calexico Poet Gets ‘Lost in Thought’

Rosita Torres and Munguia are alleged by the DA’s Office to have beaten and killed 30-year-old Esparza “on or about Sept. 17, (2019).”

His remains were found burned beyond recognition in a trash-bin fire by El Centro fire crews around 7:10 a.m. that morning behind some businesses near the railroad tracks on the east side of El Centro in the 900 block of Second Street near East Hamilton Avenue.

The investigation into Esparza’s death is still considered active and ongoing even as it makes its way through the legal process, Assistant El Centro Police Chief Robert Sawyer has said in prior stories. 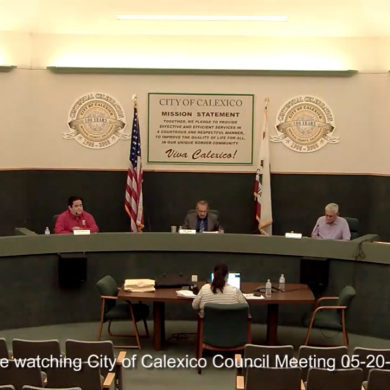