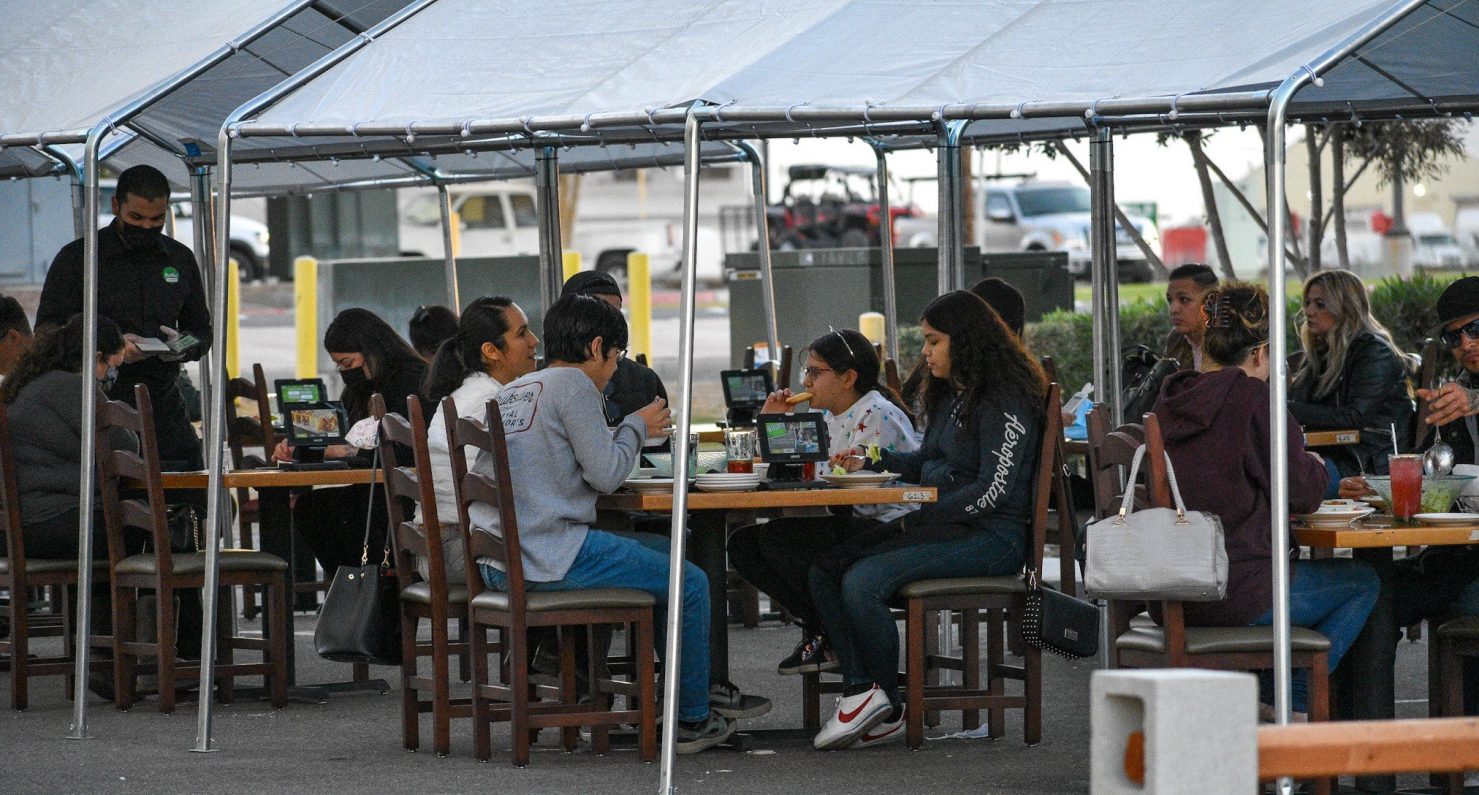 People dine outside Olive Garden in El Centro on Saturday, Dec. 5. Starting at 11:59 p.m. Sunday, Dec. 6, all patio-style dining is banned for a minimum of three weeks — and businesses had 48 hours to comply — in all of the Southern California region due to a explosion in COVID-19 hospitalization rates and a cumulative intensive-care room capacity lower than 15 percent. | CORISSA IBARRA PHOTO
Home
COVID-19
In COVID-19Local News

For the Imperial Valley, the governor’s new stay-at-home order and the three weeks’ worth of temporary restrictions that come with that will kick in late Sunday night, Dec. 6, after the regional triggers were tripped Friday night, Dec. 4.

The threshold for the new measures is when intensive-care unit capacity dips below 15 percent for the Southern California region, of which Imperial is part. As of 9:45 p.m. Friday, Southern California’s ICU capacity was at 13.1 percent, according to the California Department of Public Health’s website.

What that means is, the new restrictions go into effect at 11:59 p.m. Dec. 6 for a minimum of three weeks, and businesses will have 48 hours to comply. Restrictions most pertinent to Imperial County residents include:

There were some specifics in terms of business sector closures that local public health officials were still expected to obtain clarity on from the state later Saturday, Dec. 5, and Sunday, said county Public Health Officer Dr. Stephen Munday during a quickly convened press conference Saturday afternoon.

“There are still questions to be answered,” he said.

Of the rationale behind Gov. Gavin Newsom’s new mandate, he said: “The (current) surge has been ongoing … if we don’t manage to contain this, we will not have hospital capacity to take care of our needs.”

California public health officials are projecting that all ICU capacity in the state will exceeded by mid-December, Munday said. An example of how dire the situation is, he added, could be found in Newsom’s data presented Dec. 3, when Newsom reported that during a single day in November there were 777 new hospitalizations due to COVID, compared to Dec. 2, when there were 1,651 hospitalizations in the state.

Although little new information was shared at the 1 p.m. press conference, Imperial County Supervisors’ Chairman Luis Plancarte did have the opportunity to speak directly to the public before the new restrictions take hold.

“Today we find ourselves in a very familiar place, asking Imperial County residents to make sacrifices for a greater good,” Plancarte said. Acknowledging that “so many have lost loved ones” and have “suffered from this illness,” he added Imperial County can emerge from this “healthy and strong and conquer COVID-19.”

The temporary restrictions can be lifted after three weeks, only if ICU capacity is projected to be at or above 15 percent for four weeks after the end of the three-week closure. The restrictions will stay in place if the four-week projection is less than 15 percent, according to state Public Health.

Under the new order, which was announced by Gov. Gavin Newsom on Thursday, Dec. 3, the state is divided into five regions — Southern California, San Joaquin Valley, Greater Sacramento, the Bay Area, and Northern California.

ICU capacity conditions continued to worsen through the weekend, according to date released by the state late Sunday night, Dec. 6. Capacity for Southern California had dipped to 10.3 percent and 6.6 percent for San Joaquin Valley. The Greater Sacramento was also edging toward the threshold at 18.2 percent.

Imperial County Public Health Department officials on Thursday said the regions were organized based on the prior relationships many of the counties have in terms of patient transfers and resource-sharing agreements.

Current ICU capacity and hospital census information for Imperial County was only partially available on Friday. The last accurate update came during a media briefing Thursday afternoon, when there was a total of 28 occupied ICU beds of a total of 30 staffed beds available between El Centro Regional Medical Center and Pioneers Memorial Hospital in Brawley.

So, as of Dec. 3, that would have placed Imperial County at 93.3 percent ICU staffed capacity, or 6.7 percent available capacity.

Twenty of those 28 ICU beds were filled with COVID-positive patients, county officials said.

On Friday morning, El Centro Regional put out its daily census numbers on Facebook, showing that the hospital had 64 COVID-positive patients and a total of 119 patients admitted in the 161-bed facility. ECMRC does not share its ICU data in its daily census.

For Pioneers, no new census information was available. In fact, according to a Pioneers spokesperson earlier in the week, the Brawley hospital will no longer be sharing its daily patient census information with the media outside the controlled confines of the weekly joint press conferences between the hospitals and county public health officials.

County Public Health Director Jeanette Angulo on Dec. 5 said the two-day lag on hospitalization data occurs because the numbers filter to the health department from the state, rather than directly from the local hospitals.

County officials did not have a great deal to share with the media regarding the new stay-at-home orders on Thursday afternoon, considering the Dec. 3 press conference came just a few hours after Newsom’s announcement.

Still, officials did acknowledge that the news would not be welcomed by some.

“Not all of our community is going to want to hear that or abide by that,” Imperial County Executive Officer Tony Rouhotas Jr. said Dec. 3, who for several weeks has thanked the community for its vigilance in the face of this new wave, but has also recognized the “pandemic fatigue” among the public from life in the most-restrictive purple tier.

During this new surge, which really started back in October but escalated more rapidly across the state in early November, some 99.2 percent of California’s population is now living under the purple tier.

Dr. Munday even warned that if the measures implemented by the state order do not have an effect on curbing COVID cases and hospitalizations in Imperial County, he has the authority to impose even stricter measures.

On Saturday, Munday was asked whether these new restrictions would come with enhanced enforcement. He said that was not something to be answered by the Imperial County Public Health Department, and that law enforcement agencies should be queried.

No new data was made available at the Dec. 5 press conference.

Between the 23 California counties (11 in Southern California and 12 in San Joaquin Valley) affected by the triggered stay-at-home order Sunday, some 84 percent of the state’s population is subject to the restrictions.

As local health officials explained Dec. 3 and at other times over the last few weeks, Imperial County is a unique predicament in this second surge for a variety of reasons.

In terms of patient capacity, Imperial County, with Pioneers and El Centro Regional, in tandem with the 80-bed Alternate Care Site at Imperial Valley College, has the physical capability to deal with many more COVID hospitalizations. However, it’s the doctors, nurses, therapists, and other staff to service that physical capacity that is coming up short.

On Dec. 3, for example, Edward said he had the physical capacity for 32 ICU beds, but only the staffing necessary to serve 20 of those beds.

Pioneers Chief Executive Officer Larry Lewis agreed, saying that he can quickly increase his ICU bed count by 10 in Brawley, but he needs the staffing to do that.

Edward and Lewis said they have been aided a great deal so far by the California Emergency Management Services Authority in finding additional staffing, but more is needed.

For ECRMC, the situation is more dire, as the larger of the two hospitals does get the lion’s share of the hospital traffic in the county, with its proximity to the border and the fact that Calexico does not have its own hospital.

Even though El Centro Regional has a huge 50-bed medical-surgical expansion in its northern parking lot and other expanded physical facilities on its campus, the medical center needs more nurses, therapists, and doctors.

“No leaf has been unturned or rock not looked under for finding additional staff,” Edward said Thursday.

It’s the same for the ACS at IVC. While the facility has not taken in the number of patients it is capable of, it still cannot provide the staffing to attend to all 80 beds. As of Dec. 3, it only had enough staffing to deal with a maximum capacity of 30 patients, said Chris Herring, Imperial County Emergency Medical Services Agency director.

There were 18 patients in the ACS on Thursday.

All of these staffing conditions, and even the ability to transfer, elucidates the other predicament facing Imperial County in this second wave.

As Rouhotas explained Dec. 3, yet again, during the first local surge in late spring and early summer, which hit its peak in July, Imperial County was a late bloomer. It felt the effects of COVID after most of the state and country, so there were available testing and staffing resources from around California that could be corralled and sent here en masse.

Dr. Munday and Jeff Lamoure, who as deputy director of county Environmental Health is spearheading the COVID testing coordination, have said the state approved Imperial County’s request for added testing capacity several weeks ago, but the testing infrastructure and staffing will not arrive until next week.

At the height of the first surge, Imperial County had four OptumServe testing “lanes” at three separate sites, each lane capable of running 165 tests a day, for a total of 660 tests day.

Now, there is but a single state-sponsored, free OptumServe site in the county, at the Brawley Senior Center, 575 J. St. The Valley will retain that site.

Fortunately, testing capacity for all the community, especially for target populations like farmworkers and other essential employees, nursing-home patients and staff, jail inmates, and the homeless, among others, will get a major shot in the arm starting Wednesday, Dec. 9.

Arriving Dec. 8, Lamoure said a mobile-testing bus capable of running 528 tests a day, will set up at the Imperial Valley Fairgrounds in Imperial for community testing Dec. 9, Wednesday, through Dec. 11, Friday, and Dec. 14, Monday. Appointments can be made through the OptumServe website, here.

According to a press release from the county Public Health Department released on Sunday, Dec. 6, the bus will likely “pop up” in other spots in the county in the near future, including the El Centro Public Library and the Calexico 10 Theatres parking lots. Watch out for social media messages and updates from the health department on additional locations.

The mobile “strike team,” which can go to the targeted populations directly and is capable of administering 165 tests a day, will arrive Dec. 9 and initially to be based out of Veterans Memorial Hall (247 South Imperial Ave.) in Imperial, Lamoure said.

According to Sunday’s press release, the hall is considered a second OptumServe site. Like the Brawley site, appointments are required and can be made online at the OptumServe website, and hours of operations will be from 7 a.m. to 7 p.m. Mondays through Fridays.

“We feel we have a lot of testing capacity,” Munday said on Dec. 3. 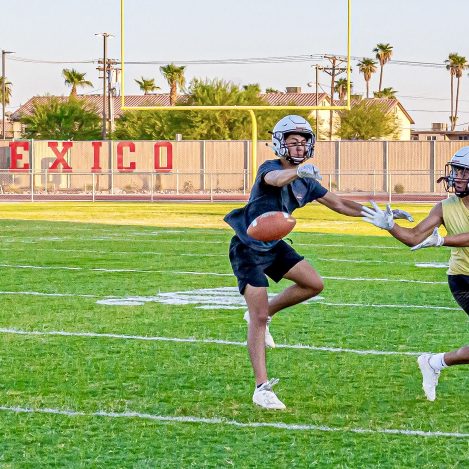