A row of electricity meters is shown. Imperial Irrigation District is carrying the burden of $12.3 million in unpaid energy bills from customers from the start of the pandemic to Nov. 30. | STOCK IMAGE
Home
Featured Stories
In Featured StoriesLocal News

With delinquent accounts for energy usage topping $12.3 million since the start of the pandemic, something has to change, says Imperial Irrigation District leadership.

The district has a moratorium on shutting off people’s power since the pandemic hit, but leaders are seeing that the problem has not gotten better, only worse.

“Just to let the community know, we’ve been holding off on doing anything for quite a while, understanding the conditions of our customers financially, coupled with the high demand of our heat season where a lot of energy is used,” General Manager Henry Martinez said. “We’ve been very carefully monitoring this situation, but it has come to a point where something has to change. Otherwise it’s going to get worse and we’ll find ourselves in a hole we can’t get ourselves out of.”

As of Monday, Nov. 30, there are more than 45,000 accounts that are in delinquencies, district Chief Financial Officer Catherine Belen Valenzuela said. It totals more than $12.3 million in charges that have not been paid.

If the district were disconnecting customers for not paying their bill, there would be 9,204 accounts ready to disconnect at the end of November, Valenzuela said. Just over half of those, 54 percent, are in the Coachella Valley, and 46 percent are in the Imperial Valley.

That number is compared to 3,666 accounts in November 2019 that were on the disconnect list, according to Valenzuela. The total amount of delinquent accounts was just over $1 million last year, where it is at more than $4.6 million now.

It takes some time, usually several months, for a customer to be on the disconnect list, IID spokesperson Robert Schettler said. The district does a lot of outreach trying to contact customers, let them know of the assistance that is available and get them on a payment plan before they fall onto the disconnect list.

There are more people who are delinquent on their account and have not paid in more than 31 days, he said.

There are programs in place that can help customers facing issues paying their bill, including a new one from Imperial County, Martinez said at the Tuesday, Dec. 1, meeting of the IID Board of Directors.

County officials have set aside $1 million for the Imperial County COVID-19 Electricity Relief Program. The application is available at https://bit.ly/COVIDUtilityRelief

Others have presented plans to help the IID after discussion first started of collecting the unpaid money.

On Nov. 25, the Imperial Valley Community Health Coalition, a union of numerous non-profit entities, proposed a two-part plan to avoid utility shut-offs during the current COVID-19 surge, drawing on the model for eviction moratoriums recently passed by the Legislature.

At a Nov. 16 meeting of the Imperial Irrigation District Energy Consumers’ Advisory Committee, members voted against the proposal to reinstate a regulation that would disconnect customers’ electric services for 9,486 delinquent accounts between March and December 2020, but urged committee members to bring forward a plan that would address a $10 million deficit in the IID budget and create a pathway for repayment for impacted consumers during COVID-19.

The I.V. Community Health Coalition proposed a plan that adapts the terms of the California eviction moratorium (Assembly Bill 3008) to address the impact of COVID-19. The two-part plan establishes an automatic standard repayment plan for “delinquent” accounts from March and December. It ensures customers are not shut off on the basis of nonpayment and enrolls them on a 12-month repayment play beginning April 2021, according to a coalition press release dated Nov. 27.

For struggling consumers after January 2021, the proposal establishes a payment modification plan for COVID-19-impacted consumers (with documented hardship), who will be eligible for protection from disconnection if they pay 25 percent of their utility payments every month. In cases of extreme COVID-19-related hardship, where a consumer is unable to pay 25 percent of charges, they could qualify for existing assistance to cover participation in a payment modification plan, the press release states.

“Staying at home is the most important action people can do to stay safe during this pandemic. Shutting off power will have devastating effects for our children that are distance learning, adults that are working from home, and individuals that are ill may need power for medical devices to recover to name a few. We want to believe we can pass a plan that will help consumers get out of this debt as this virus continues to ravage our community” stated Eric Reyes, a member of the IID consumer advisory committee, in the press release.

Around 80 people at the Dec. 1 IID meeting submitted public comments supporting the Community Health Coalition’s plan, adding that threatening to shut off the power will add unnecessary hardship on households already facing strain.

Coalition spokesperson Luis Flores was not immediately available for comment by deadline.

Previous
Trial To Start For ECPD Officer Accused of Assault 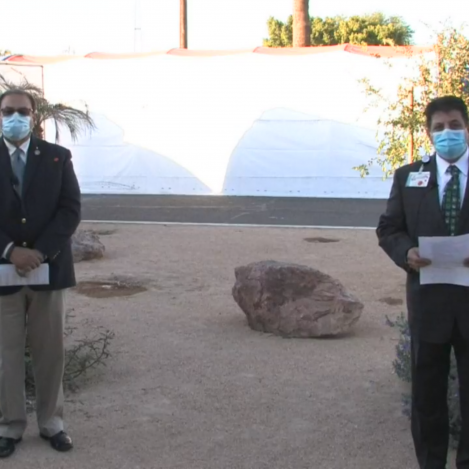