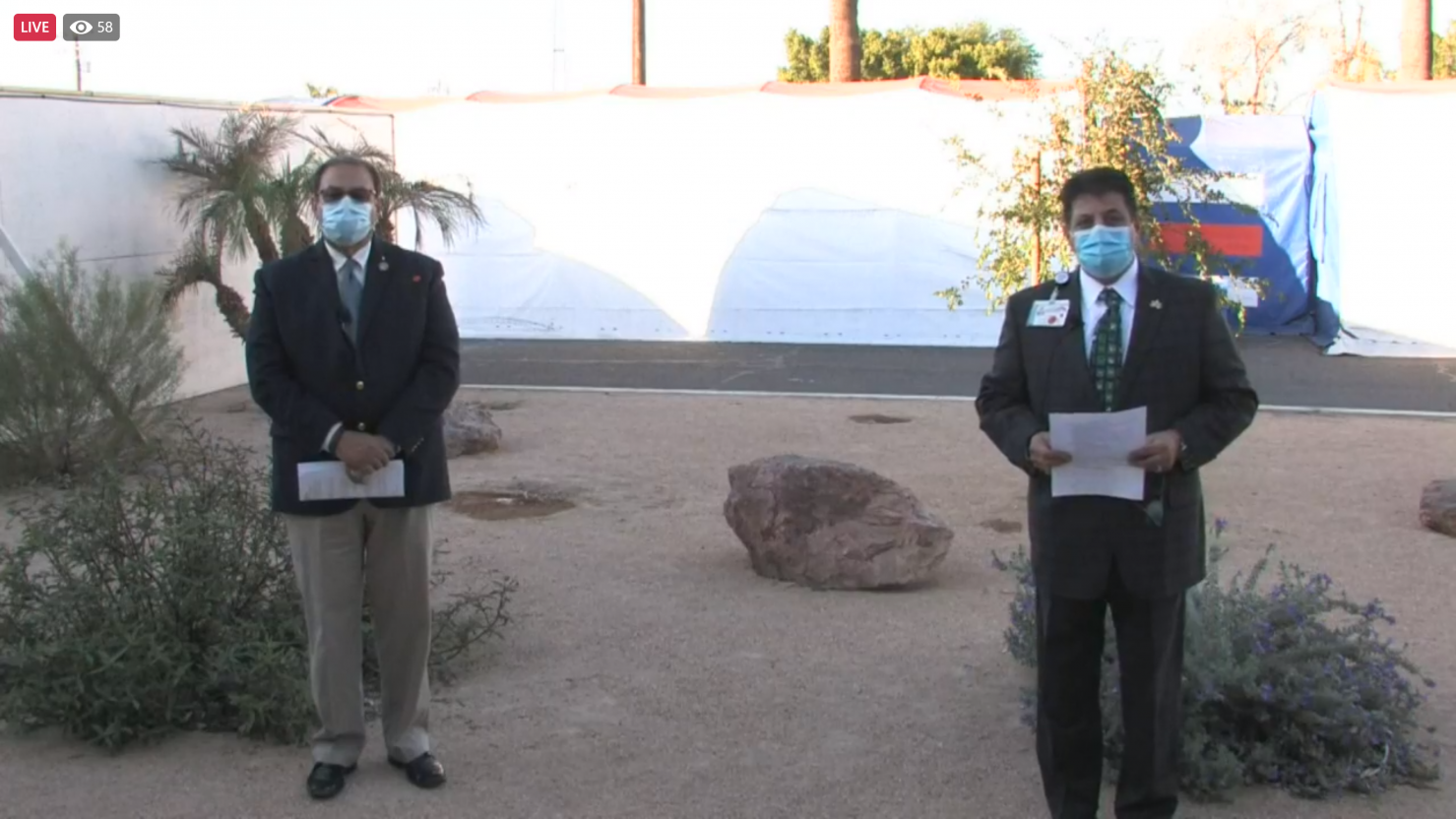 The severity in COVID cases appears to be ratcheting up locally as six deaths related to coronavirus were reported among Imperial County’s two hospitals on Monday, Nov. 30, according to El Centro Regional Medical Center’s chief executive.

Four COVID-related deaths were recorded at the El Centro hospital alone, the most since the pandemic began locally, chief administrator Adolphe Edward said during an interview with this newspaper Tuesday afternoon, Dec. 1.

A Pioneers Memorial Healthcare District spokeswoman would not confirm that two deaths occurred at the Brawley hospital. Edward, however, said the two other deaths were at Pioneers.

The announcement came as Edward and Imperial County Board of Supervisors Chairman Luis Plancarte joined together Tuesday afternoon to plead with the public via Facebook Live to adhere to existing state and local health orders in the face of escalating COVID cases, hospitalizations, and, now, deaths.

In a follow-up discussion after the live update, Edward said the hospital’s projections are that by Friday, Dec. 4, to Saturday, Dec. 5, there will be around 65 COVID-positive patients admitted.

“Those are the highest levels we’ve seen, even in the first wave,” he said.

Imperial County, and much of the state, is bracing for additional and more stringent stay-at-home orders from the state after Gov. Gavin Newsom warned during a press conference Nov. 30 that more aggressive tactics to stem the rising number of cases throughout the state are being considered.

Although no announcement had come from the state as of Tuesday afternoon, Plancarte predicted during the joint update with Edward that a looming lockdown is inevitable at this rate.

Hospitalizations, and the severity of cases that come along with that, are of particular concern as healthcare officials worry that COVID will overrun resources. While it appears Imperial County has the physical capacity to house more patients, it might not have all the personnel needed to treat them, Imperial County Public Health Officer, Dr. Stephen Munday said during a presentation to the county Board of Supervisors on Tuesday morning.

As an example, he said the Alternate Care Site at Imperial Valley College, which is alleviating some of the patient load from the two hospitals as it takes in less severe COVID cases on the mend, is built to serve 80 patients, but he said it does not have the staff to treat those 80 patients at present.

Meanwhile, Imperial County had 1,046 active COVID cases, for a total of 16,429 COVID cases, as of 10:30 a.m. Wednesday, Dec. 2. The county’s surveillance dashboard still showed 356 deaths; the six new deaths likely won’t be reflected in that county for a couple of weeks due to delays in death reporting.

“We’re quite high in terms of deaths and cases for a county of our size,” Public Health Director Jeanette Angulo said Tuesday morning. Of the high number of cases per 100,000 residents, Angulo added, “Unadjusted tells the true activity in our community.”

While Imperial County awaits word of more stringent measures, Mexicali is already preparing for a tightening of restrictions.

An increase in hospitalizations and deaths prompted Baja California Secretary of Public Health Alonso Pérez Rico to announce on Dec. 1 that more restrictions can be expected across the state.

“Right now, everything indicates we’re going to transition to the red (tier),” Pérez said in a video clip that was broadcast online by Mexicali-based news station Canal 66.

Mexico has a four-tiered colored system that corresponds with varying levels of restrictions, with red being the most restrictive, solely allowing for the operation of essential businesses and for residents to take walks nearby their homes.

Pérez said officials are going to evaluate the department’s next steps but assured the public that not all activities that are currently permitted would come to a complete standstill.

He did indicate, however, that the number of patrons inside venues and forums would be further restricted, but not completely shuttered.

Also, on Nov. 30, Mexicali Mayor Marina del Pilar Ávila Olmeda shared a video on her Facebook page encouraging residents to remain indoors as much as possible and to refrain from hosting and attending large gatherings in the coming weeks.

“The hospitals are dangerously close to filling,” Ávila said.

Her announcement also included a telephone number for residents to call to report large gatherings that are not permitted under the more restrictive red tier.

Ávila’s message to her constituents are nearly exact to what Supervisor Plancarte asked of Imperial County residents Tuesday afternoon with Edward by his side.

“We understand that these are very difficult times for everybody, especially with the season where we are used to gathering and coming together as families. As a county … our goal is to do everything we can to keep you safe, to keep you healthy, to help you help us keep you healthy,” Plancarte said.

“COVID is not like a grasshopper, where it jumps from one to place to another, or a mosquito that flies. COVID is something that depends on us to transport it to where it’s going,” he said. “It depends on us taking it to people, it depends on us getting it from people.”

Plancarte reminded the public that the county has stay-at-home orders already in place against nonessential travel within the community.

“It is you that are watching us who can break this chain by staying at home, by sheltering at home,” he said. “There’s a stay-at-home order for all nonessential travel that we should all be aware of.”

He went on to define essential travel within the community as going to and from work, getting medicine, or groceries. Other than that, he said, people should be staying home and avoiding large crowds and large gatherings.

Plancarte said the county of Imperial, with more than 1,000 employees, is already undergoing measures to limit exposures in the workplace, encouraging employees to telecommute, and only bringing in half of the staff members for morning shifts and half for afternoon shifts.

He also cited the holidays, saying Thanksgiving has passed and county public health officials expect a bump in COVID cases due to people from outside their immediate homes gathering. But he said with Christmas and New Year holidays upon us, “there’s the opportunity to protest us, to protect our families, to protect our loved ones.”

Simple ways to further that protection, he added, is to continuing using face coverings worn properly over the nose and covering the mouth, washing hands or using hand sanitizer when soap and water are not available, physical distancing of at least six feet apart, staying at home, and avoiding large crowds.

Although allowed across the state in the purple tier, Plancarte was frank about what public health officials are seeing when people are gathering at restaurants, even in an outdoor setting.

“We have seen a lot of people, who do not live together that are friends that meet at a restaurant, and then they take that mask off so that they can share that meal and talk, creating those opportunities to transmit COVID, taking it home to your loved ones,” he said.

During a follow-up discussion Dec. 1, Edward spoke more on the projections his hospital is seeing with additional holidays on the horizon. He said the end of the week will begin to produce that Thanksgiving holiday bump, which results some seven to 10 days after the holiday.

He fully expects that Christmas, New Year’s Eve, and New Year’s Day will result in even more cases of COVID.

“We’re asking the public now to do a little bit more,” he said.

Talk of pandemic fatigue among the public has been a regular thing for some time, as people continue to defy health orders, but Edward talked about the effect that he is seeing of pandemic fatigue on his own medical staff, and that is a concern, he said.

Edward has seen medical staff come up positive with COVID after they admit to going out and decompressing with family, and as conditions worsen locally, he said he is worried that his own staff of doctors and nurses will begin to fall ill because of fatigue.