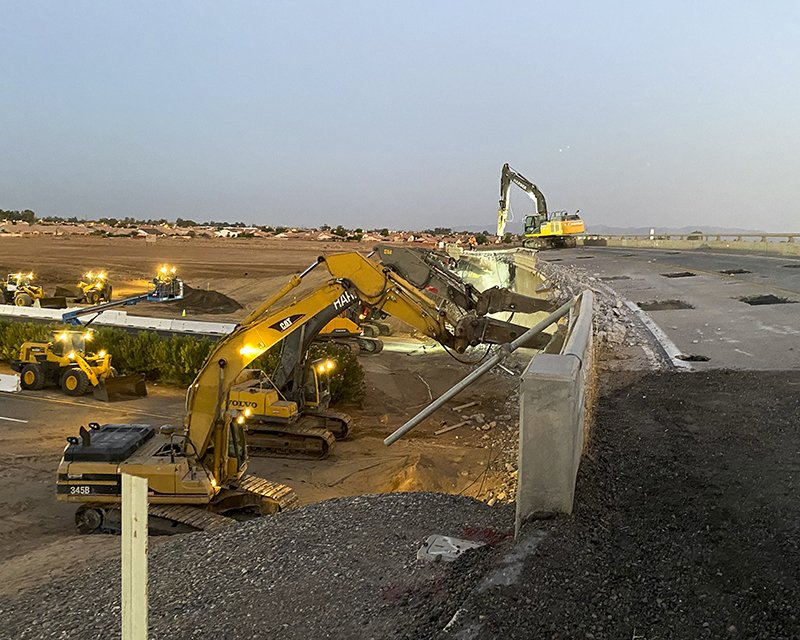 Demolition work on the Imperial Avenue-Interstate 8 overpass bridge occurred in the spring. Stage 2 of the work, which will keep the ramps closed for the next six to eight months, was to get underway Thursday, Dec. 3. | CALTRANS PHOTO
Home
Community Briefs
In Community Briefs

EL CENTRO — Construction crews will close the westbound Interstate 8/Imperial Avenue ramps on Thursday, Dec. 3 at 9 p.m., which will leave the eastbound and westbound I-8 ramps at Imperial closed for six to eight months for Stage 2 work on the I-8/Imperial interchange project, according to a press release from the state Department of Transportation.

Motorists on Interstate 8 will be detoured along northbound Highway 86/Fourth Street to Adams Avenue west to Imperial Avenue, according to the Caltrans release.

Access to businesses and medical facilities will continue via the detour, the release stated.

Caltrans asks community members to pardon noisy pile-driving work continuing the next two months as crews work weekdays 7 a.m. to 4 p.m. Work will take place within the closed construction zone, away from motorists.

The project schedule has been advanced, and the interchange is expected to open to traffic in late 2021 or early 2022, with associated work continuing through 2023.

The I-8/Imperial Avenue interchange project removed the existing bridge and eastbound on- and off-ramps, and will reconstruct the structure and the on- and off-ramps in both directions. Construction will include a new entrance loop ramp from southbound Imperial Avenue to eastbound I-8 and create access to the city of El Centro’s upcoming extension of southbound Imperial Avenue to city areas south of I-8. Project construction began spring with Stage 1 closures of the eastbound on- and off-ramps beginning early July for eight to 10 months. Stage 2 requires closing the entire interchange for six to eight months, according to the Caltrans release.