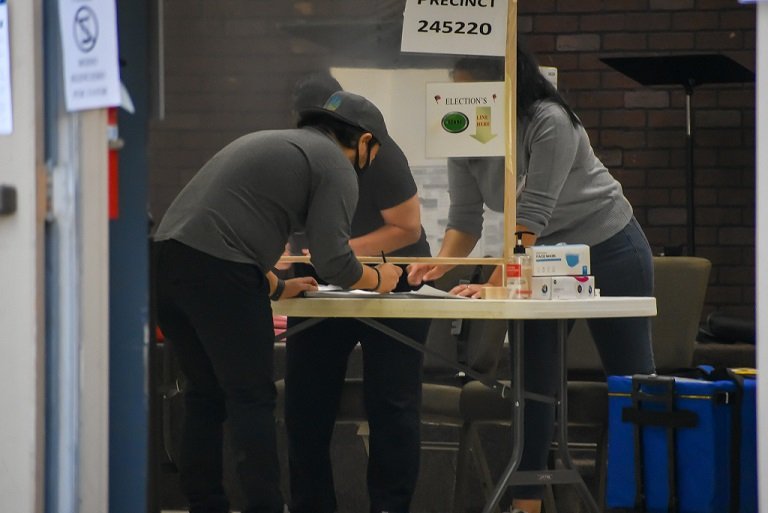 A voter fills out paperwork before getting his ballot at the polling site inside Christ Community Church, 590 W. Orange Ave., in El Centro on Tuesday, Nov. 3. | CORISSA IBARRA PHOTO
Home
Election Coverage
In Election Coverage

Additional mail-in ballots continue to trickle in from the Nov. 3 general election after the Imperial County Registrar’s Office processed nearly 3,000 more ballots since the last update on Friday, Nov. 13.

When the summary report was issued at the close of the business day Nov. 13, county officials estimated about 1,000 mail-in ballots and 7,000 provisional ballots were left to be counted.

An estimated 7,000 provisional ballots are all that remain to be counted, according to a county press release accompanying the Nov. 16 updated count.

County officials warned that more mail-in ballots could be coming, as California counties have until Friday, Nov. 20, to receive late ballots if they are postmarked by Nov. 3.

The most recent count brings the total county voter turnout to 60.83 percent now that 51,172 ballots from the county’s 84,123 eligible registered voters have been tallied.

With the remaining 7,000 provisional ballots, projections are on track for a 69.15 percent total turnout for Imperial County once the election is certified by Dec. 3.

The count is expected to slow now that election officials will begin to process the provisional ballots.

“Provisional ballots are counted after all voter rosters are reviewed and the voter’s history is applied to the voter’s record, which require some additional steps to take,” according to the county’s most recent press release.

Public Information Officer Linsey Dale, who is part of the team directing the count, said the processing of provisional ballots takes about twice as long as a similar amount of mail-in ballots due to the extra steps involved.